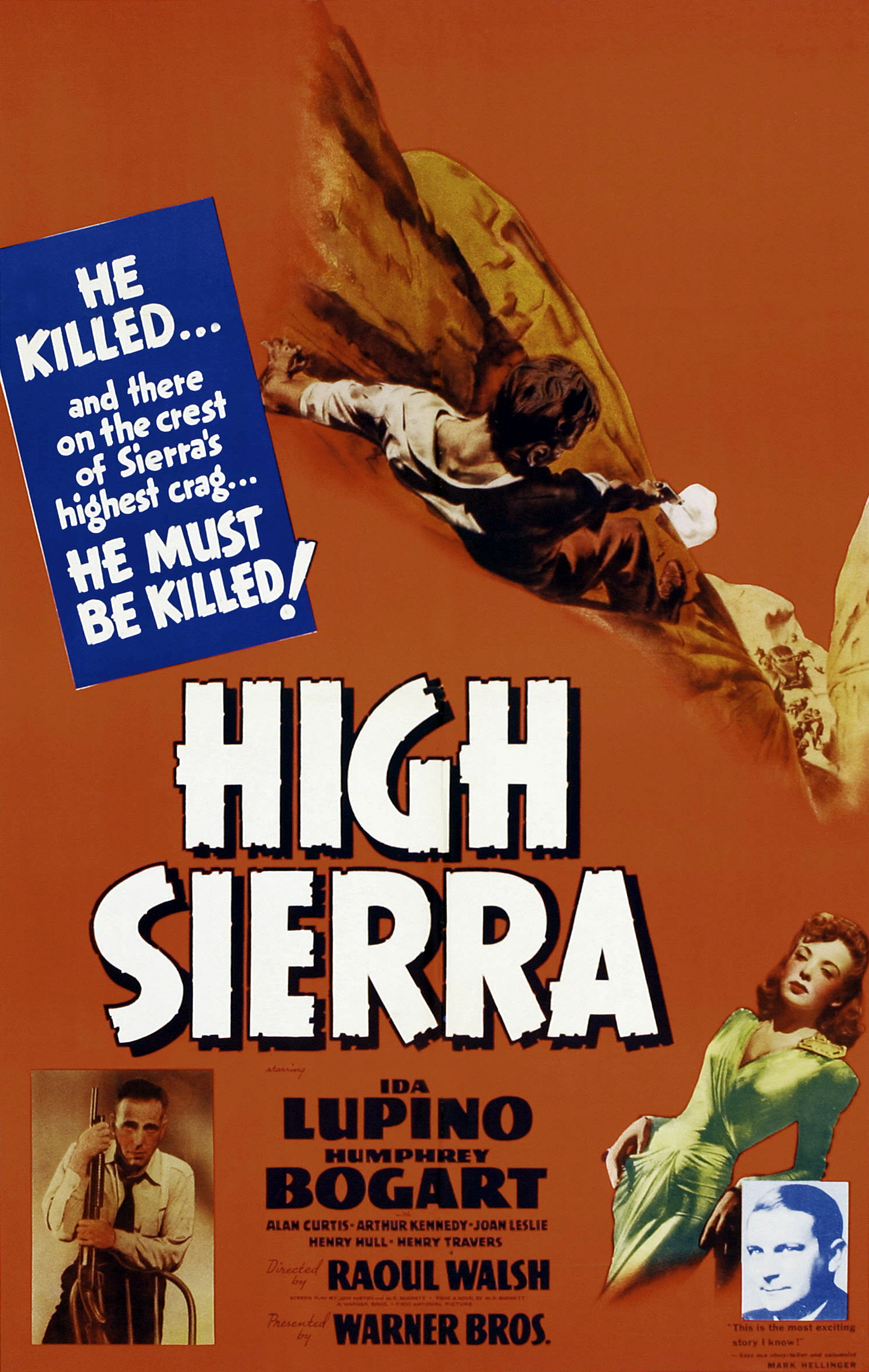 High Sierra is a film about a criminal who takes his journey to its logical conclusion. From the start you have a general feeling for how this will play out. The main character is an unrepentant criminal who has stayed in the game for too long. At this point your criminal career doesn’t tend to end until death so he just keeps on going until he can’t anymore. I thought the movie was good but the particularly weak cast keeps it from going to the next level.

The movie starts with Roy being able to leave jail at last. It pays to know criminals in high places after all and Big Mac asks Roy to do one more heist for him. The guy desperately wants his riches and Roy agrees but the one thing the lead doesn’t like is that he will have to team up with two rookies, Red and Babe. These two are amateurs in absolutely every area of the business and they’ve even brought along a lady named Marie for the ride. These two choke under pressure and are always talking tough so Roy’s going to have a hard time on his hands> Can he still pull off the heist and what’s this about bringing a dog along for the ride as well?

Throughout the movie you can see how Roy gets frustrated at the rest of the cast because they do have a habit of making things more difficult on him. When you can’t trust your partners in a life or death situation then that makes things a lot tougher right off the bat. Sure enough, they do get into trouble. Red and Babe are the worst characters in the film by far and the sooner they were written out of the film the better.

The dynamic with Roy and Marie was much better even if she was not quite ready to be a big time criminal either. She has been around the block long enough not to make any big mistakes or get in the way but at the same time this isn’t completely her scene. She is part of why the main characters keep Pard (the dog) around and I am glad that she is so nice to him the whole time. I don’t think Pard should be in such a dangerous environment though. One wrong shot or step and it could be too dangerous so the sooner he wasn’t on screen the better.

Pard was a really great dog of course and knew a lot of tricks but I don’t think he would really want to be a criminal. Pard seems like an upstanding citizen to me. While Marie is good, she does get a bit jealous at one point and I think she focuses too much on romance. Romance is probably something you shouldn’t pursue when you’re in the company of criminals. Not the best batch of options after all.

As for Roy, well I liked him in a lot of ways but also not in others. His positive qualities boil down to the fact that he is confident and efficient. He is also a decent guy compared to the rest as he quickly steps in to help Marie and isn’t about to let these criminals do whatever they want. Nobody pushes Roy around and it’s easy to see how he became such a respected figure where nobody wants to mess with him anymore. Now as to why he was not particularly good. He ends up falling for a lady named Velma who can no longer walk.

Roy agrees to fix this for her and even calls in a surgeon. Keep in mind that the family is very poor and could not afford such an operation so Roy agrees to do it. Velma’s grandfather lets Roy know that she is taken but he doesn’t care. So the surgery is a success and then he asks her to marry him and sulks when she says no. My main problem with this is that the operation going well should have been the best day of her life and yet Roy had to ruin it by bringing this up.

He couldn’t take a hint either and just as bad was the fact that he didn’t try to hide his disappointment. So he goes out of his way to make Velma feel absolutely terrible on her big day and then he also insults the guy she intends to marry right away. Not only was his infatuation really rushed as it came out of nowhere but it just hurts him as a man. The instant he said he would pay for the surgery he should have been able to put on a brave face no mater what happened. You just end up feeling bad for Velma and the family by the end of it all.

As to the actual plot, well the heist is fairly quick but doesn’t go all that smoothly for the main characters. The two guys ended up holding Roy back quite a bit and the whole thing also just took too long. They should have definitely been out of there before the final interruption so I don’t get how it was taking them so long. The time they went wasn’t even that bad and the plan was decent but nothing works forever and that’s why time was of the essence.

The writing in the film was pretty solid. The pacing is good too and so the movie is always keeping your interest from start to finish. I thought the ending was effective and so you get a complete package here. The film is fundamentally sound so even if I think it could have been better, it’s one that I could recommend. Personally I just would have either removed the Velma subplot or made Roy handle it a little better. I just didn’t think it made sense how much the whole experience broke him since he seems like a guy with a lot of experience who would have been in this situation before.

Overall, High Sierra should have skipped the romance but even with it, this is still a solid title. I guess you could call it a heist film but that doesn’t seem right and calling it a thriller makes it sound more action packed than it is. I almost think drama would be the best genre for it, but either way just think of it as a low key film where the lead is trying to pull off a really big crime. It also serves as a reminder on why you shouldn’t drink too many beers as that can end up having a heavy cost.