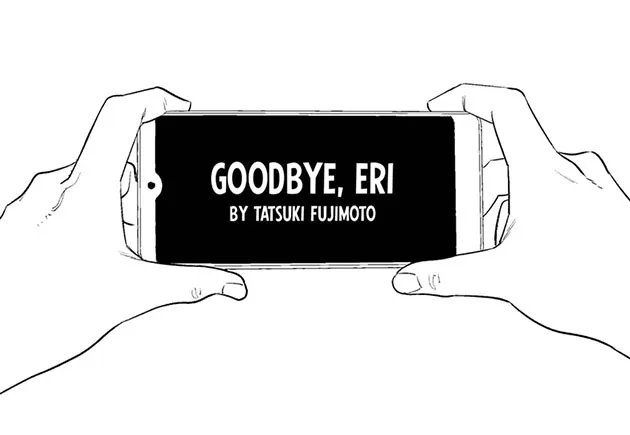 It’s time to look at a one shot that just came out recently and it’s a very interesting one. It gets rather meta to the point where it’s hard to interpret just how it ended although I’ll throw my take in there later on. The one shot is 200 pages long which is crazy but at the same time there are so many pages that are recycled or just don’t have art in them that I can see why it was so long. I’d say the ending goes a long way to making the story as it helped make this one real memorable. Even as I type this I’m still sorting out exactly how good it was in my head but by the end it’ll be clear.

So the story starts by introducing us to Yuta whose mother is terminally ill and will be dying soon. She has asked him to start recording her daily life and eventual death so that she can be remembered. Yuta does this but at the last second he doesn’t have the heart to record her death and storms out. Fast forward many years and he has decided to show the video at school but edited in a scene where the hospital explodes as she dies to make up for the fact that he doesn’t have the footage. The entire student body and faculty are furious at how he handled his mother’s death and he grows suicidal until he meets a lady named Eri.

Eri says that she liked his movie but that he wasn’t very professional in how he crafted it so she will train him to make a new one. They’ll meet every night and weekend to watch a bunch of movies at an abandoned building she hangs out at. Yuta agrees to do so and now he will be recording her but will this really give him peace and is she really just trying to help him out or does she have some kind of ulterior motive?

To be honest if she had an ulterior motive then Yuta was probably doomed from the start since he went along with her plans anyway. At its core this is a fairly emotional story about overcoming loss and grief while trying to restart your life. The story is self contained in this adventure so there is a beginning, middle, and ending. The cast is very small though with Yuta and Eri being the only real characters with a big role. Yuta’s father does get some solid scenes near the middle though which I thought were handled well. He comes across as a very understanding guy and one who made his share of mistakes but does his best to make things right.

So onto the positives, I thought Eri was a solid character. Whatever her reasons may have been, she did stop Yuta from taking his own life which is massive as a start. From there on she helped give him courage and drive to keep on going and find a new path. Even when she was sick she handled it well and ultimately was the kind of character who helped make a difference in the world. To combat that, I did not like Yuta. The explosion at the end of the video was fine enough, I can see how it would be a scandal but apparently that’s how he usually tends to end his videos. He likes putting a fantasy element in it.

My real issue with him is that he’s not a very classy guy. He throws in some crude humor here like filming himself using the bathroom. Really? That’s just taking things way too far and he’s also not very classy about the kinds of movie scenes that he likes. He’s so obvious about it that he even has to comment on those moments. So yeah Yuta’s not a very stand up guy and probably not someone that would be super easy to get along with. I think he could have toned down these parts of his personality. It’s probably to show how comfortable he is with Eri but it doesn’t make him look any better.

The story can be rather dark although you probably guessed that by the subject matter. Even towards the end we get some sad twists about the mother and it all plays into the theme of how people can be very different in real life than they are from the recordings. Even though Yuta is recording these characters himself, it is only a small part of who they really were and anyone can fake things in front of a camera. I thought the twist about the mother was a bit much tbh, particularly as it doesn’t directly impact Yuta all that much. It’s more of an effect for the reader at this point.

As for the artwork, it’s okay. It’s not one of the better art pieces that I’ve seen but it does the job. I’d consider it slightly below average but you always know what’s going on. It’s also partially the style as it’s trying to be very live action-esque which often does not translate quite as smoothly into manga. I also think you shouldn’t even strive to look as realistic as possible. There’s a fine line between coming close in a stylized way like One Punch Man and then just not being visually appealing.

Now I was mixed on how much I should put a spoiler warning for a one shot because either you’ve read it or you haven’t but I’ll throw it in just in case. Skip the next 5 paragraphs if you haven’t read the one shot because there are a lot of twists at the end. As I said earlier, the twists are what make the story after all so you probably don’t want to know them ahead of time or it’ll take part of the fun away. It is the kind of story that could change a bit when you know the twists though so either way you may want to re read parts of it.

Okay so in the end Yuta makes his new movie about Eri as he is able to film her all the way to her dying breath this time. The movie is received very well by the school this time and Yuta goes on to have a family and live a good life. The life has its ups and downs but then his family is in an accident one day and they all die so he is the last survivor now. He decides to take his own life once again and goes to where Eri used to hang out except she is still there and hasn’t aged a day. She mentions that she is a vampire and will never die but her brain resets so she had him create the video so she could remember her old life and never be sad anymore. This gives Yuta a new lease on life so he heads out…and then the building explodes.

So what does this mean? Was the entire adventure actually a part of his movie? If so, when did the movie start and was any of this actually real or was it a video the entire time? Did he actually blow up the building because he was that insane? There’s a lot of ways to read this and you could have fun bouncing it around in your head for a long while. To be honest this was probably going to be a 4 or a 5 without the twists at the end because it would have been relentlessly sad if Yuta survived all of that only for his whole family to have died. If he also died in the end the score would have been lowered even further without a doubt.

Instead, this actually ended things on a more positive note. Whether you think it’s real or not, it’s at least a little upbeat that he got to walk out and the explosion was a nice touch. Still, I’m not going to cop out on you here so I’m going to give you a real answer on how I interpreted this. I was on the fence about the two so real quick here was my runner up theory. At the end Yuta really did blow up the place so this way there would be fantasy in his story again. There really was no vampire (Is what he would rationalize in his head) and the ending would have been true from his story. It’s an interesting theory but I don’t think it’s right.

So what I think is that everything until he meets up with Eri is completely real. Yuta recorded his mother’s life and then he made a movie which was shunned by the school. He met up with Eri in the shed and they watched a ton of movies together. Eri got sick and then she died. This is the turning point. At this point Yuta started recording the extra scenes including the fake ending. The fantasy angle that he always talked about is why he added a vampire at the end and the big explosion. He didn’t actually grow up and have a family. That was all narration from him inside the film. So every scene after Eri dies is a part of the actual movie. It would be easy to fake his being older with special effects and since he discussed with Eri the whole film before hand, they would have filmed the scene in advance.

To me this makes the most sense. I feel like the constant mentions of his wanting to add a fantasy edge to it were all leading up to this. The strongest counter argument to this is how strongly you believe the narration that isn’t within the film panels. Alternately you could just say that the whole thing is a movie to be extra meta but I think doing that weakens the story as a whole. If nothing was real then it’s all a bit pointless. I also just don’t think that’s even a possibility. I’m sure there are a lot of other fun theories you could come up with after this one shot, but this is the one I stick to at least. Eri’s death was the final real scene here and the rest was within the film that everyone was watching. Of course if you play it straight and everything was real including the explosion at the building that would be a really intense way to go. It’s why I was torn on which option to go with and that ended up being my runner up.

Overall, Goodbye Eri is one of those stories teetering on the brink of total destruction and being a good story. I was even a bit stressed for it the whole time because it was hard to tell just how it was going. Fortunately the ending pulls through and in the end this would be a story that I would recommend. It’s sad without throwing this in your face the whole time and while none of the characters are particularly noteworthy, they all accomplish their tasks well enough. The writing is solid enough to hold this all together and so overall it holds its own. It’s long enough to be collected into volume format one day so I wonder if this would ever get printed over here. Who knows, maybe one day it’ll turn out that this was actually the pilot to an ongoing story.