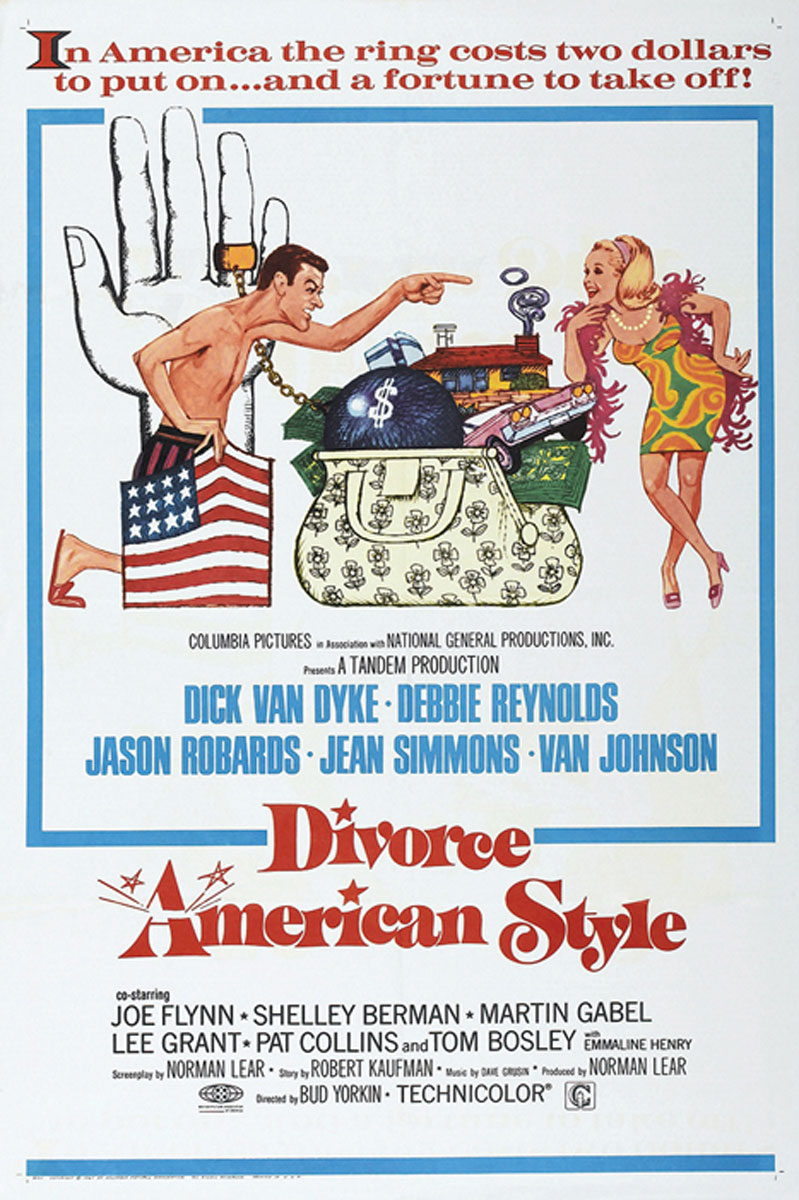 A film about divorce is definitely something that you don’t see very often. Showing this as a comedy is also something you probably would not have expected right off the gate. Unfortunately it doesn’t work as well as it could have because both of the main characters just go away too far so by the time everything is said and done, it’s hard to see them being together again. You just can’t believe it and that’s not a good sign since they’re the main characters here. I think if they could have stayed off the rebound then this could have really worked.

The movie starts off by showing us a lot of couples having a ton of fights every night. We then cut to the main duo of Richard and Barbara who are definitely not having a fun time at the moment. They fight about everything and the rift between them is only growing larger and larger. They used to be so close so it’s a shame o see what has happened to them. They just can’t have a single conversation without something going wrong and so they end up going for a divorce but who will ultimately win? Barbara and Richard both want to keep as much of the money and assets as possible but only one can have a favorable deal.

Lets dive right into why this film doesn’t ultimately end up being as good as it should be. When the two characters split up, you figure they’ll be back together by the end of the movie. That’s just how these things go. The real problem is that you then have to make sure that both parties don’t do something they’ll regret like having an affair. Unfortunately they do, both characters immediately go back onto the dating scene and seem to be incredibly desperate. They date quickly and move on with their affairs without any delay. So as soon as that happens its just hard to look forward to the ending because they were so quick to have a moment with someone else.

If the two were really as close as all that, they should not have dated anyone even after splitting up. If you were going to have them do this then they shouldn’t get back together at the end of the movie. It all just doesn’t track well and hurts the two characters quite a lot. It even puts a bit of a damper on the humor itself because the characters just aren’t likable anymore. Maybe you should just root for the rebound characters to win instead at that point although you know they’re doomed from the start.

Now on to who was responsible for the issues. Well, it seems like Barbara was the instigator from how the film picks up. Of course we know that they’ve been having a lot of issues so it’s hard to say who really started it but from how the film makes it appear, Barbara is at fault in most of the circumstances. She’s overly critical when Richard comes in and really just keeps going at him the whole time. Richard was at least trying to ask questions about what was wrong so they could talk things over but she didn’t seem to want to talk most of the time. It takes ages to get anything out of her until Richard starts breaking dishes.

It was interesting to see that the kids even had a scorecard because of how often this happens every night so they would tally up each fight. Clearly this dynamic has been the same way for a very long time at this point. From there things only escalate as this goes into court but even then Barbara’s demands are all outrageous. Richard basically has to pay for everything even though she owns it now in addition to making the regular payments. It doesn’t seem very fair and of course this is part of the humor but throughout the film it felt like Barbara was delivering gut punches to Richard while he kept holding up the white flag.

She would act apologetic at times but it doesn’t mean much when she’s still having a blast out there. So no matter how you slice it, Richard was really getting the short end of the stick here. He’s lucky that prices were so low back then because otherwise he would have really been doomed. Seeing him order a full McDonalds combo for under $1 was crazy. It reminds you just how much prices have changed over the years. Nowadays even with the app that would probably be close to 10 bucks.

Richard was a fun character but he wasn’t without his faults either. The guy did get drunk quite often and that would put him in sticky situations like when one of his friends tried to get him to have an affair. That would have really been a bad move. Fortunately he was able to get out of that in time but he should never have been in that situation in the first place. Then later on he does break down and gets together with Nancy which was also a shame.

As for the rebound characters, both Nancy and Big Al seem decent enough but you know that they’re doomed so it’s hard to get too invested. I’ll at least give Big Al some credit for not getting involved until the divorce was actually complete. It seemed like Nancy was ready even while this was in progress which is really not a good look for her. She also seems quite well off so why even get another partner? Apparently she still likes her husband but can’t get together officially again or it would cut off her finances. Why not get together unofficially though? Seems to me like that would be easier.

The writing and dialogue is fun as always though. I always liked those old time scripts with everyone talking in such a dignified way. It’s something that you can’t really capture in a modern title. Not in the same way at least, people just talked differently back then and it was very entertaining. The humor works well in some scenes too. It’s definitely not their most entertaining picture but Richard really manages to sell his scenes. I think his booming voice definitely works well for when he’s shocked and starts yelling about it. Even the scenes where he and Barbara are fighting tends to be entertaining as a result.

I’d say the film is fairly long but doesn’t really end up dragging out. It just boils down to the fact that the romance was really on the weaker side here which ends up impacting the whole experience. This is not a film that should have had a rebound romance at all and including that in there ends up weakening the film a lot. It’s a film that should have focused more on the comedy aspect of their being single again. You know, as much as I’m glad that the kids didn’t have a big role here, it might have been better if they were fighting to impress the kids instead of focusing on the romance angle of it. That would have been an improvement.

I’d say the weakest part outside of the romance is the scene where we are introduced to the guy with a ton of kids from various marriages and the hypnosis scenes. Both of these scenes have a common factor which is that they are extremely stretched out. The best humor scenes are the ones where you’ve got a witty retort or some quick gags to run through. When you take that same gag and just keep on going it ends up losing its steam immediately and that’s what happens here. I’d have cut the hypnosis scene out entirely and for the multiple marriages guy I’d have just reduced that by about half of its screen time. Instead give more time to the friends of each main character so they can dish out more poorly thought out advice. Hearing bad advice from the friends can always be entertaining in its own right as its a test to see how gullible the leads can be.

You could also have more fun with some of the supporting characters like the two attorneys. I liked those guys right off the bat and how they knew this wasn’t personal. They may have been opponents in the court room but were still friends outside of it. It was a fun dynamic and that’s the kind of humor that the film is best on. Focus on that and you’d have a stronger experience all around.

Overall, This film certainly shows how expensive divorce can be and why you want to make sure that you’ve found the right person so you don’t have to be going trough this process. While likely not as exaggerated as it was depicted here, things can definitely go quite poorly for you if you get divorced. These two characters ended up causing each other a whole lot of damage so even once they are back together again you can’t help but feel that things will take some time to get back to 100%. If anything it’s like nothing has changed so they’re one step away from doing it all over again. Check the film out if you want some laughs and don’t have a better comedy film on the docket but you can do better than this one.