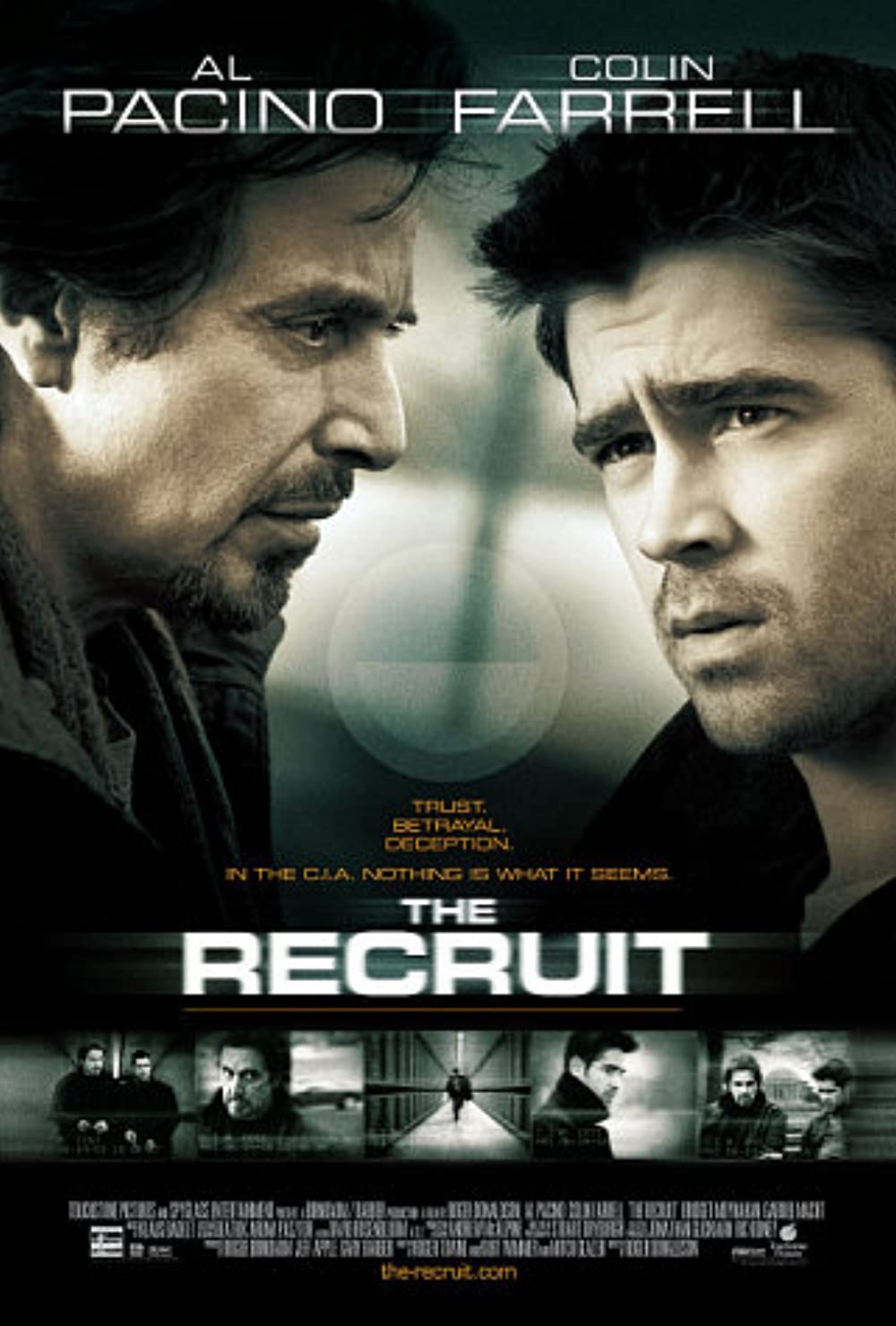 The Recruit is definitely a movie about the dangers of romance. No matter how you slice it, things would have been way different for the main character if he had stuck out of that arena. Still, you’re in for a fun time with this movie. It’s got a good plot and a lot of twists and turns to keep you interested all the way through.

The movie starts by introducing us to James who is a master coder. He’s invented a program which lets him take control of anything else. Well, he’s approached by a guy from the CIA named Walter who is recruiting him and brings up the dad card. See, James never knew exactly what his Dad was doing and it turns out that he was in the CIA. Walter tells James that he won’t get any more answers about that but this is in his blood so he should join up. James does and quickly meets a nice lady named Layla. The actual CIA tests are tougher than expected though, can James hold on?

Right off the bat James isn’t one of the best main characters. Imagine being drunk and arriving late to the biggest event in your life? If he had missed the presentation entirely and ruined it for everyone then that would have been downright tragic. Fortunately things turned out well but it showed that he wasn’t very responsible. This continues when he goes to the CIA for tests and is immediately distracted by Layla. He had to be cautioned by the proctors because he was so out of it. That’s not a good look for someone who should be highly motivated to succeed so that he can find out more about his father.

Romance proves to be his biggest weakness and it gets him into trouble several times. One test by the CIA is to take a girl out as if it was a date but naturally he messes this up as well. The first rule here is always to not get too attached but he doesn’t excel at that to put it mildly. Throughout the film he doesn’t think things through at all and it always puts him in a tricky spot. By the end of the movie you can at least appreciate that he is decent at being sneaky in the field but he also gets lucky just as many times.

For example, at one point he has to use a computer while at someone’s house so he sneaks off during the night/early morning to pull this off but of course she sees him. He lays a fake trail down to cover himself but I don’t think that would erase the suspicion at all. If anything it still makes him stand out like a sore thumb and as a CIA agent that’s not what you want to do. Luck is a part of the game of course but James really did himself no favors the whole time. I’d say he’s a cut below the average action lead here.

Then you have Walter who is more of a stand out character. He’s good at manipulation and deception which is exactly what you want from a CIA fighter. He knows what makes everyone tick and how to get the best of them. The guy has an impressive track record on the field so everyone is pretty much in awe of him. I thought he delivered on that and knows how to be kind one moment and gruff the next. His sudden emotion changes always make it hard to know exactly what he is thinking here.

Finally you have Layla as the main heroine. Initially she doesn’t care for James and that makes sense because he can come across as annoying and she is here to be an agent, not to have to put up with this guy’s flirting. Naturally you can guess how this will play out anyway. The romance is one of the weaker parts of the film but I’ll give Layla credit for not being completely outmaneuvered here. She still did well on her own with carrying out her plans and also being aware that James was acting a bit fishy. In that way she wasn’t just another minion getting defeated or anything like that.

Now how much you enjoy the film will likely come down to how much you like the CIA training because a solid chunk of the film is all about how to become a CIA agent rather than actually being out there in the field so it’s all a bit different in that sense. Usually the field work is the majority of the film although there is time for that too. It was interesting to see how the tests went although some seemed a little too intense. At least one in particular would be enough for me to decide to leave the CIA entirely. It was just way too crazy.

I always thought that the test about how to beat out the lie detector machine was always interesting though. Is it really so easy to beat out? If so then it seems like that is not a very good machine to be using on any of the sides. So instead you have to assume that both sides have better machines at the ready that they keep hidden in which case this training won’t be super useful. At least it’s painless compared to the others though so that’s a start. It’s the silver lining here.

Once James is in the field then we get to the meat of the story. It was nice to get the chase scenes and the big action moments that I was waiting for. So I thought all of these scenes were pretty solid. Seeing James have to decide what to do next since it’s hard to trust anyone was also good. These scenes were all really solid and helped the film live up to the action angle.

So it boils down to my one real issue with the film being the romance. It just felt like one of those romances that had to be included. Sure, it fits into the big plan at the end but that just makes it feel all the more convenient. A really large part of the plan revolved around the romance so if it hadn’t gone through then it seems like the whole movie would have been really different. Couple that with the fact that the romance really shouldn’t have gone so smoothly and it feels like the film was trying too hard to make everything connected. I also still think the CIA training went way too far in one of the tests and don’t see how that would be allowed here at all. Surely one of the execs at the CIA would have shut that down a lot sooner right?

Overall, The Recruit is a solid film and makes for a good spy thriller. If you want to watch something sort of like Jason Bourne or James Bond but with a look at how it all began then this is a good one to check out. James can be a bit of an annoying main character who is very easy to manipulate but he does have the tough disposition you would need to have for this job. He is able to manage that much at least. A sequel to this movie would definitely be fun but by this point it’s probably going to stay as a one shot.

2 thoughts on “The Recruit Review”