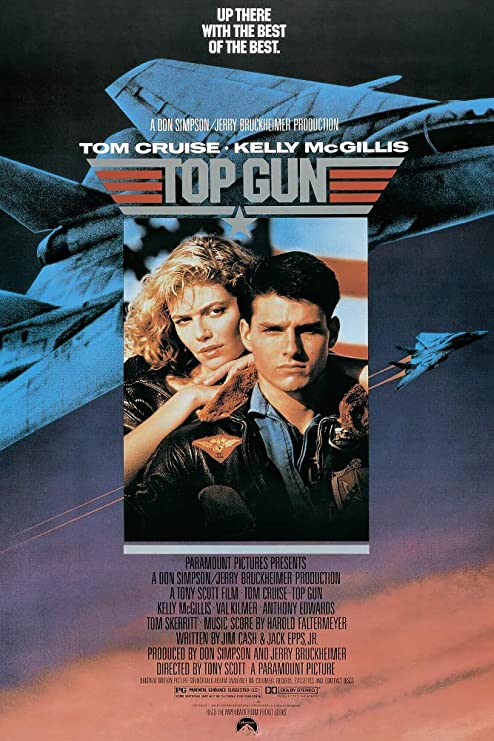 Top Gun is a film that came out a long while ago and by this point just about everyone’s heard of it. With the new film out it was the perfect time to give it a re-watch. It’s a solid film that has aged well. I remember I expected a little more action when I saw it originally but it’s probably best to go in expecting more of a drama that contains action rather than the other way around. It has its weak points to be sure but ultimately it’s a solid film that you could check out at any time.

The movie starts off by introducing us to Maverick and Goose who are one of the top airplane pilot teams around. However, as skilled as they are they also tend to be rather unpredictable as Maverick in particular loves to be a rebel. He’ll prioritize thrills over doing things by the book. As luck would have it, the guy ahead of him ends up cracking so now Maverick and Goose have been selected to go to Top Gun, a school where only the best of the best qualify. Can they prove that they are the best duo in the sky once and for all?

Of course the purpose of Top Gun isn’t merely to see who is the best but to keep America strong and ready for any kind of dogfight. Towards the beginning of the movie they mention how America’s aerial supremacy has been weakening as of late as people have gotten used to just using tech and auto aiming so this should help them stay in peak condition. Maverick isn’t particularly concerned but he will find that Iceman is a tough rival when it comes to claiming the top spot in the school. Will he be able to get the win here?

Right off the bat one of the film’s strengths is that it has a very memorable soundtrack. The Danger Zone song that plays really is quite good so you never get tired of it when that track plays. The opening scene with the planes is certainly iconic with that song in the background. It really gives the film a lot of personality and also makes the scene feel that much bolder. If you take the song away then the scene wouldn’t hold up as well and it’s a perfect example of why the songs are so important.

The effects throughout the film are also really good. They spared no expense on this one and as a result it holds up well. The movie is a bit long but it doesn’t feel that way as it’s always interesting. When we finally do get to the action scenes near the end it is worth the wait. The battles are solid and while of course I would like to have had more action, it works well as the climax regardless.

Now as for the weak points of the film, there are 2 in particular. The first is that the romance is very weak here. Maverick needs to try and be the best so you’d think there would be no time for romance right away. Particularly once he finds out that she is the teacher you’d expect that he would pump the brakes a bit. Instead he really lets this get to him and can’t even take constructive criticism after that. If you cut out the romance entirely then I think the film would be a lot stronger.

On Charlie’s side as well you feel like she wouldn’t have fallen for him so easily after she has seen the usual pick up lines a million times before. She’s here on a very serious job to train these pilots so there’s no time for distractions like that. It also wouldn’t really change the film much at all if you cut out the romance so it always begs the question of why include it in the first place right?

The other weak point is surprisingly Maverick. I actually wasn’t a big fan of him at times. He does have his good qualities of course like his confidence and the fact that he always has a comeback. That’s good and something I want my lead to have. Where he falters aside from the romance is how he loses his nerve towards the end. Now there is an important story reason as to why that happens which really shakes Maverick up, but it’s a little too much. So I’d have been fine with it if Maverick quit or something right off the jump. My issue was later on in the climax when Maverick is able to get into the air but then loses his nerve again and ditches Iceman when it was 5-1.

It was for a short time and Maverick ultimately turns back to help out but he easily could have died in that time. 5 against 1 is absolutely crazy odds in a dogfight after all. So Maverick has all of the potential to be a great character and on paper I would expect to like this character but he didn’t actually work out for me. Instead it was Iceman who stole the show. He has great confidence as well but never loses his cool. The nickname is very deserved and while he may do things by the book, it doesn’t make him any less skilled than Maverick. If anything he is more dependable.

Is Maverick probably a little more skilled as a pilot? It’s very debatable but sure I would give him the slight edge. Iceman is still the guy I’d want as my wingman the whole time though because I know where he would be at every moment. He had a really good handle on things and he was always willing to be the bigger man too. He’s the one who approached Maverick to pay his respects and if you notice he never tended to instigate any of the issues without a valid reason. He was certainly legitimized in trying to explain to Maverick why you can’t abandon your partner even in a training exercise.

In general the writing is really solid though so you’ll get a lot of fun exchanges there. Goose is another big character in the film and he’s a good character too. He’s definitely got a good friendship with Maverick going here and he has skills of his own as well. Then you have Viper who shows off his skills during the simulations as the instructor too. He runs a tight ship and has the skills to back it up.

As I mentioned earlier, there isn’t a lot of real action until the end of the film but there is a lot of airplane battles throughout. The simulations are handled really well so you’ll have a fun time with that too. Writing is what ultimately puts a film like this over the top and so I had a good time with it. It’s a solid all around movie that has a good amount of replay value because of how fast paced it is.

Overall, Top Gun is a pretty good movie. It has some areas where it can be better but the positives certainly outweigh the negatives and it’s a fairly safe recommendation to anyone that wants to watch a solid film about teamwork. I’ll have a review up for the sequel shortly and I can confirm that it makes the most out of this one as a base. A good sequel should use the tools that it has from the first film after all and this one makes the most of it.