This review is of the TV-14 edited version of the film. All thoughts below should be addressed as such as a review of the unedited version is more negative 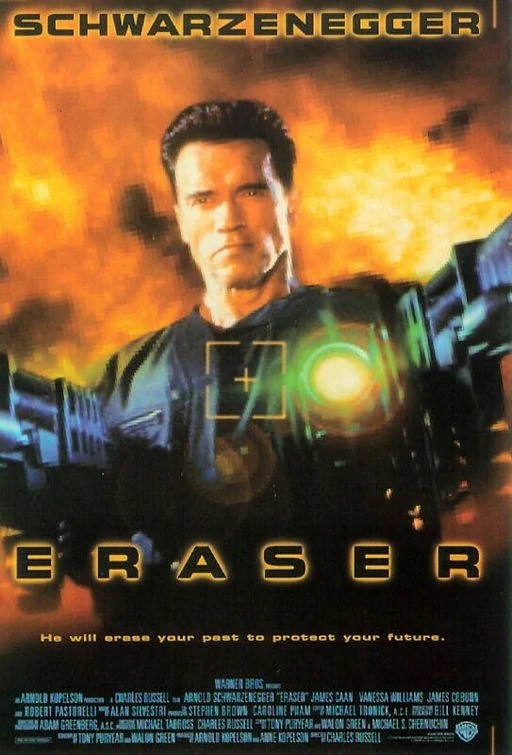 Eraser is a very classic kind of action film. It’s a title you just don’t see a lot of nowadays with the solo hero going around proving why he’s the best in the biz. There aren’t a lot of subplots or conspiracies going on, not a lot of subplots or an ensemble cast. It’s just a straight forward action title with one twist that the audience knows almost from the jump. It works well though because the execution is on point and if not for one scene I dare say this one would have been very good. Still, it does hold its own in the middle.

The movie starts by introducing us to John who works as an Eraser. Basically he helps someone erase their identity and go into witness protection. He works alone and that has always worked well since nobody can slow him down this way. He’s like a one man army and always produces at the highest level possible. This time he’s going to have a tougher time though as he has to protect a lady named Lee before it’s time for her testimony. Thing is, she didn’t sign up for such a dangerous job and so she isn’t cooperating too much. John will have to figure out a way to make this work because there are many forces at work trying to prevent her from testifying.

With a film like this I think it’s important that the person who is being protected be a likable character. You don’t want someone who is going out of their way to make things tougher on John or someone who is made to be antagonistic. I suppose there are some interesting developments you can have with that, but I would definitely prefer you just have a good character right from the jump and that’s what this film does.

Lee’s resistance to ditching her old life is understandable since it was all thrown at her as a surprise. The government decided not to let her in on the loop until she was after the point of no return. It’s definitely not a good way to go about it and John calls them out on this. Once Lee is attacked and realizes that she will have to vanish, she gets reasonable from there on. So that’s why I wouldn’t take any point away from her. I thought she was quick on the ball and still a reasonable character all the way through.

As for John, well he’s your classic hero and a really good one at that. This character type is always fun as we really get to see how skilled he is. John does fall for one trap but we can cut him some slack because while the whole thing is obvious to the viewer, he has been working with these guys for a while so you’re bound to make a mistake at some point. Only reason I was a little surprised is I thought that the film was hinting that John had figured out the treachery ahead of time but I suppose it was just showing that he had some suspicions. That’s fair.

I guess I shouldn’t say who the main villain is. The film gives it away early on but it’s still hard for me to say if that’s part of the general premise or if it should still be treated as a twist. I’m not really sure so I’ll play it safe here. I thought the villain was rather solid. He wants to be rich and so he’ll do anything for money. It’s a classic motive that’s as old as time but it’s one that still has a lot of bite to it. I thought it worked pretty well here and the guy does have a certain level of craftiness to him even if he can’t hope to win in a straight fight.

The movie is really fast paced with a lot of action at every corner. The action scenes are cool and there is also a lot of really fun dialogue here. It’s got that proper blend of action and humor that you like to see. The characters keep things light but you can always tell that the stakes are high. We get a lot of different sceneries as the characters are always on the go and so you’re just going to have a lot of fun here.

Of course as I mentioned earlier, the film does make one mistake and that’s when a bunch of alligators showed up. Now, you know as soon as this happened that there was going to be an issue. Any animal appearing means that there will probably be some animal violence. Is that a bit jaded? Possibly I suppose but I’m sure the stats would back me up on this. One of them ends up getting shot dead in a rather brutal scene as we see it close up. That was a powerful shot that directly took two stars off the final score. It’s a shame that one moment like that can destroy so much momentum but that’s just how it can go in these things. Of course as a disclaimer if a scene like that won’t take you out of the movie then I can still cautiously recommend it to you, but I wouldn’t do a blind recommendation like that to just anyone. This scene would quickly prevent that.

As a final note, the film also just looks really good. I wouldn’t say that’s surprising as a lot of old films still look good, but I thought the effects and everything were particularly impressive. In this film the villains use guns that can fire at the speed of light which is rather incredible. A cool shockwave visual is used here so you can see the ripples around each shot. It helps the guns feel really sci-fi based and I would say it works really well. You can definitely see how these guns could upset the balance of the planet although it makes it a little hard to believe that John could keep on standing after going up against such high tech weapons. Just a bit of a stretch when you think about it.

Overall, Eraser is like a blast from the past. It’s the kind of film you’re surprised didn’t get more popular because it really had all of the tools needed in order to break out into the mainstream. Ultimately this didn’t end up happening at least as far as I’m concerned since I’ve never heard of it before. Perhaps the alligator moment knocked it out for a lot of people but that’s not the kind of moment you would typically expect to cause a big stir. Either way this could have had a lot of potential for sequels and stuff but I guess that just wasn’t to be this time. It’s always fun finding fast paced action films like this from back in the day, we’ll see how the next one turns out.