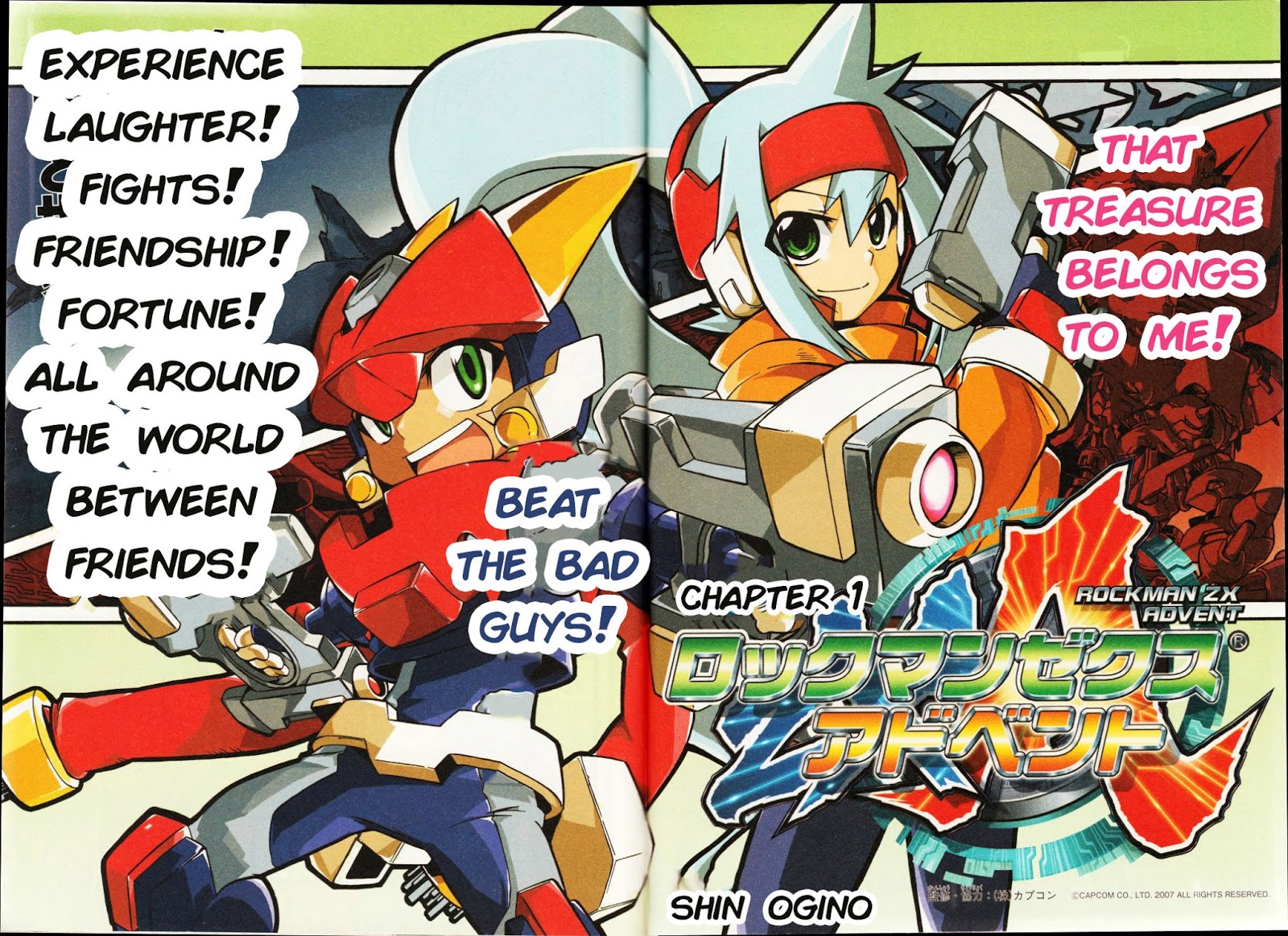 This is one of those manga titles that is just so tragic on every level. It’s got solid art and it’s based on a game that should be a lot of fun. Just give me a straight to business manga where the heroes are fighting off the mavericks. It’s not that complicated…and yet the series goes straight to being a gag manga like the Zero title. It only gets serious for the final two chapters and of course by then it’s over anyway so there’s not even much of a point by then. It’s a true shame….feels bad man. Feels….baddddddddd.

So the manga starts with Ashe on one of her treasure hunts when she bumps into a little kid named Grey. He has the ability to bio merge with the model robots that are nearby and so he can become Megaman. Ashe figures that will be handy in her hunts and so she recruits him to the team. Grey is happy to help since he just loves to mess around. Their mission is officially to grab Model Ws which can be used to help resolve the energy shortage on the planet but Ashe just wants to be rich so that’s her main priority. Will she be able to get rich in 10 chapters?

Every chapter has a different maverick show up to cause some trouble and take names. The heroes pack them up and go on their way. The chapters are fairly short so it’s easy to go along with the formula approach but it’s just not a great formula. So you’ve got Ashe, Grey and Model A running around all the time. Model A’s whole character is that he’s a perv and that’s even how he is introduced in each chapter’s cover page. Man that’s a sad reputation to have. The manga seems aimed fairly young so at least his antics don’t get too crazy but he still tries to cop a feel and such which is just disgraceful for a Mega Man character.

Model A is just awful the whole time. Then I don’t get why this series decided to not have Ashe be a fighter. Basically she can’t fight at all and I don’t know what she would have been doing before Grey showed up. Evidently she’s been in the group for a while so did her hand gun actually prove to be all that she needed? This is even worse when we find out in the very last chapter that she also has the ability to merge into Mega Man but didn’t realize that because she always had to keep her distance from Model A since he was so suspect.

I don’t blame her for not wanting to merge with him but it’s all just such a forced way to keep her out of the battlefield. If you were going to make her a noncombatant anyway then just don’t even put her in that arena. Have her stay as a support/treasure hunter right through to the end. Otherwise it’s just a tease the whole time. Even with that she still manages to be the best out of the trio.

For Grey, he’s just too young. The kid is always messing around and never gets serious. I suspect that he really doesn’t even understand the true gravity of the stakes right now. Not like there’s much danger since he can dominate any opponent anyway but they should have made him a little older. That would have done a world of good for the character if you ask me. 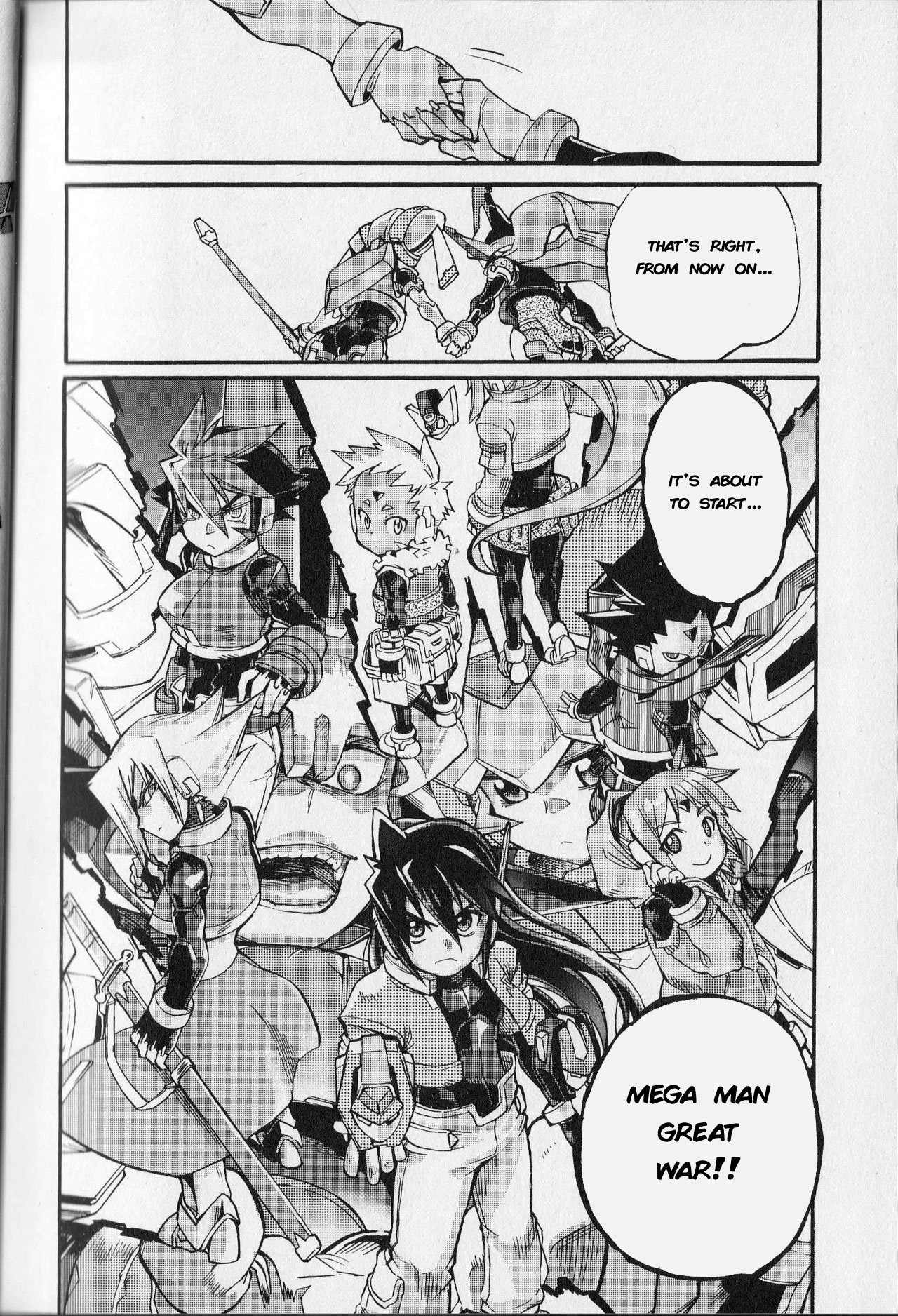 Aside from the main 3, you have the robot for each chapter but of course they’re dead almost as soon as they appear so they don’t get a lot of character. For example Buckfire is up first and before he can sizzle the characters then he is vanquished. The water type is blown up before she can even be introduced. Rospark at least gets to have her main trait as a flirt but is still taken out without mercy. The most tragic one might be Vulturon because the poor guy was just trying to play his music but he was doing better than Ashe so she declared that he had to die.

The scene is played as a gag as they murder the poor guy but when you actually think about it, he hadn’t really done anything wrong yet. Sure, as a maverick he probably would have done something soon and in most games the villains are basically shoot on sight but with how the robot reacted you couldn’t help but feel bad for him. He really didn’t think he had done anything to deserve being completely destroyed and I can’t really argue against that.

Albert was the big villain in the game so you’re probably waiting for him to turn evil here but that barely happens. He’s the comic relief scientist for most of the chapters as he tries to use the W energy for good each time but it tends to backfire in his face. He has Ashe and Grey babysit his kids at one point as well. The only time they get to fight him is when the W energy takes him over and they beat him up real fast. Then he’s back to being comic relief again. Such is the fate of Albert in this continuity.

Interestingly in the final 2 chapters it’s like a whole completely different series just like with Megaman Zero. Suddenly Albert is evil and shady and there is a whole new group of villains. You have Prometheus and Pandora talking about how the great Megaman war is approaching as all the Megaman are gathering across the planet. We see characters like Vent and Aile, Omega, the 4 guardians from the Zero games, Grey and Ashe, and someone who looks like Copy X all show up. It’s a great premise for a series that’ll never come out.

Why have all the cool things at the very end when it won’t amount to anything? It always reminds me of what a wasted opportunity this would have been. There’s so much cool potential that you can do with this instead of the actual gag manga that we got. I suppose I’m glad that these two final chapters were added in at the end but this is really the tone and feel that the whole series should have had. It would have been so cool and I want to see those characters mix it up. There’s a lot of great lore here.

Another thing that holds the series back is that it’s not very funny. I can’t say I’m surprised as comedic manga tend to be funnier when they aren’t the gag types. Gag manga tend to rely more on crude humor and everyone being super exaggerated instead of acting like real characters. That’s what holds them back here. The crude humor isn’t excessive at least, it’s probably just a scene or two but the main humor like Grey having to mimic animals to transform just doesn’t land. You probably won’t crack a smile here.

The art being strong is definitely the best point of the series. That’s at least something that you can point to if you want something really good to say about the series. There just isn’t much of a sense of purpose to this title and since I liked the original ZX a lot, this felt like a real step down. As always I’m glad for more Megaman content but I’m not sure why the Zero and Zero related titles tend to become gag titles. Doesn’t feel like that would be the first thing you think of when it comes to Zero right?

Again I have to point to the final 2 chapters on what you’d want to see in a Megaman title like this. A Megaman war would be unbelievably awesome. Even if you don’t go and grab some of the ones from alternate timelines like EXE or Starforce, there is still a lot to love here. My money would be on Omega and Vent as the top big dogs in the arena for sure. They should be able to soundly crush all of the other Megas in attendance but the fights would all be awesome nonetheless. You shouldn’t waste someone who is really good at drawing action scenes on a series without much action. 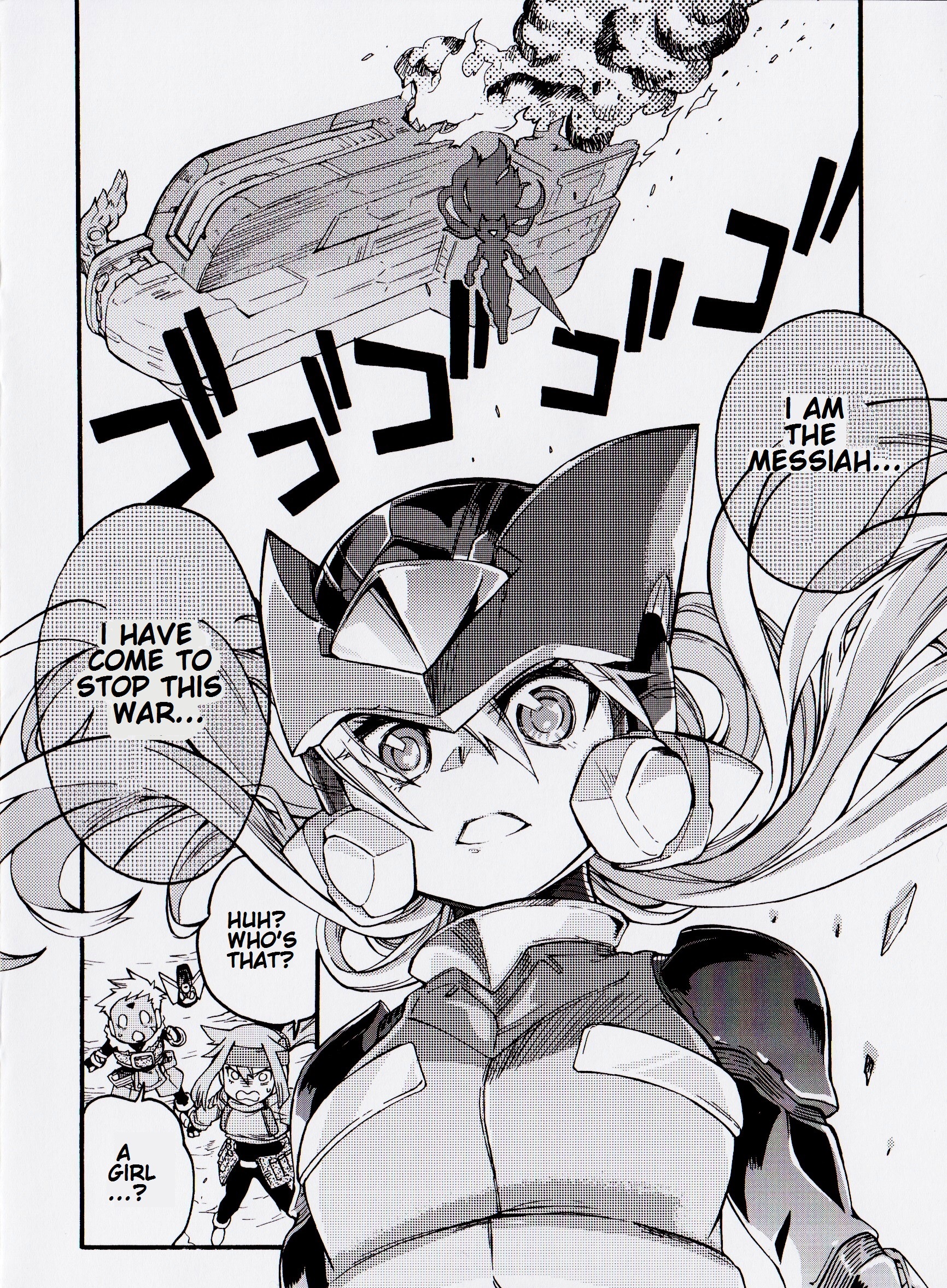 Overall, Megaman ZX Advent is a series that you’ll probably finish very quickly. After all 10 chapters goes by in the blink of an eye especially when they’re short like this. It’s not good but if you really want to see some more Megaman action then you may as well go with it. At least if they ever do decide to bring this one back and adapt the Megaman war then you’ll have some context for it. That’s definitely the best case scenario by a mile and is the optimal way to think about it even if that’s a super long shot. It’s more likely to hope for an X Dive manga which would be pretty awesome to be fair.