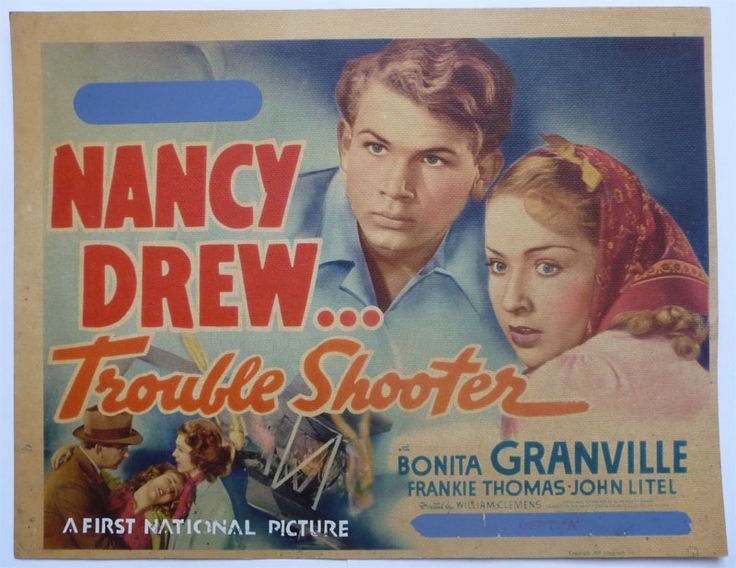 Nancy Drew has returned for some more detective shenanigans! Nancy herself doesn’t look very good in this film though and as tends to be the case in these older adventures, her friend Ted seems to be the real detective around here. It’s a fun movie and definitely a short one as well so you will have this finished in a flash. It may not stick out among the Drew adventures but it’s just solid all around.

The movie starts with a guy being accused of murder so he writes to his friend Carson Drew. Carson is ready to see that justice is served so he quickly heads out to help but much to his dismay, Nancy Drew finds out about this as well and now she wants to help. Unfortunately for Ted, she quickly tracks him down as well and decides that he will be helping her this time around. Can the two of them solve the case of who really committed the murder or will they just get in Carson’s way and cause an innocent man to be taken down?

You can see how Carson treats Nancy as a burden here with how he sighs and tries to keep her out of trouble. He’s just used to doing everything so having a kid around slows his roll. While he is confident though, it does feel like he is always foiled in the end though. There’s only so much that his law training can do here without becoming a vigilante like Nancy. Also, he’s a bit distracted here as he starts off a romance with Edna who immediately captivates him as well as Ted. Nancy gets awful spore about this which impacts her detective skills as well.

Now with a man’s life hanging in the balance you figure that the characters would not let any distractions stop them but that never seems to be the case here. All of the romance scenes here are rather painful with Carson and Ted just tripping over themselves in trying to help her. You’d think they would be a little more subtle and would realize that this isn’t the time for such tings. Worry about romance after the case has been solved. It also doesn’t feel like the romance actually impacts the story all that much. It’s just kind of there to be there.

It does hurt Ted a little but beyond that he looks good. He’s the only one to realize that the attendant was stealing the chickens and he ultimately proves to be helpful at the end as he ensures the heroes have a good landing. He is always very reluctant to get involved in these cases and would much rather take it over to the police, but once he is dragged in, Ted makes sure to do the job right. It’s why he’s such a quality character. You can sympathize with how he just wants to have a quiet day but that won’t be an option for very long. I’d say a lot of the film’s best humor also revolves around Ted and his reactions. It goes without saying that he’s the best character here.

Not to take too many shots at Nancy, she is a good lead but she almost comes off more like an antagonist at times with how she gets in the way. Her one sided feud with Edna doesn’t do her any favors either. Edna is trying to be nice the whole time while Nancy is just petty and takes everything personally. She’s also very slow on the uptake like when Carson had to quickly change his story around Edna and Nancy just didn’t get it. She tends to miss some clues that are right in front of her and so ultimately she has a ways to go before she would become the famous detective.

As for the actual case, it’s not bad. Despite a murder being involved I wouldn’t say it’s super captivating. It’s all fairly basic and the character cast is very small so it’s not like there are a whole lot of suspects that it could be. Basically if someone shows up and acts a bit antagonistic then you figure he’s probably the culprit. Sadly there’s no officer Tweedy this time so the heroes have to make do without him.

I’d say the reason why the film shines though is because the writing is just really good. Sure, it’s all very low key but because of that it ends up being a very calming film. It feels like a slice of life all the way through with two kids doing their best to spice up the day. They get their fill of action and adventure or at least Ted does. Nancy’s always ready for another round even if that’s not a good idea.

So even if the film doesn’t become all that unique, you could easily see 10 or more films just riding off of this one’s energy. You can easily just keep it going for a long while yet with slightly different cases and I think it would still be entertaining. I could probably do without the random romance but that strikes me as a one time thing anyway so the other films wouldn’t need to do that. Now we just need a film series about the Hardy Boys.

Overall, This was a pretty good film I’d say. I do have the disclaimer that you could be bored if you walk into this expecting a lot of action, but this isn’t that kind of film nor is it attempting to be. You have to be drawn in by the writing and the cheerful vibe of all the scenes. If that sounds good to you then you will certainly have a good time here. It’s just a very calming film that makes you feel good. The only thing that could have hurt this film would be if it was too long since this kind of plot is best meant for a shorter film but that’s why it’s so fast. It’s a quick adventure that’s over without having any pacing issues.