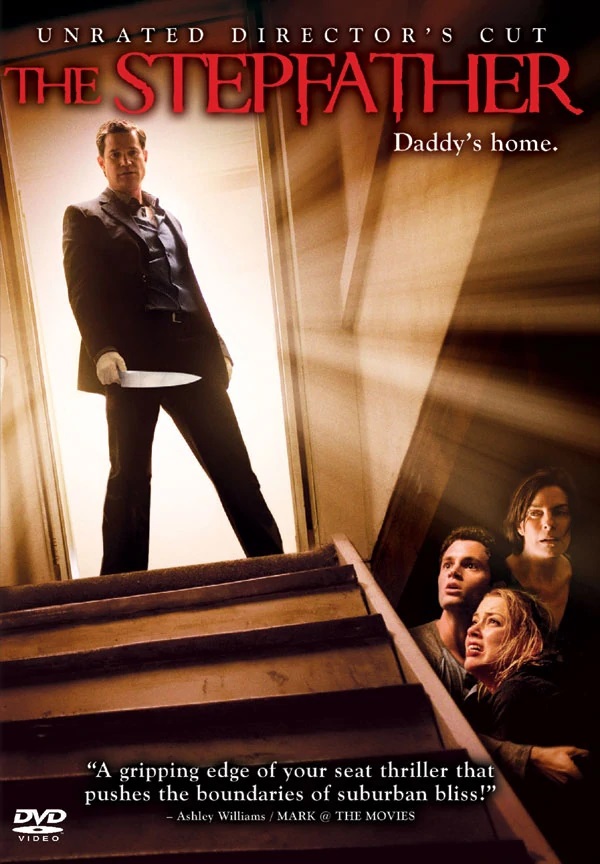 Man, the Stepfather was big enough to get a whole trilogy and then a remake? I’d never have guessed since you don’t see this guy brought up in the same breath as the horror legends like Jason or Freddy. Now those guys have withstood the test of time. This movie plays out like the others so you can sense all of the plot threads from the jump but the important thing for a film like this is always in the execution. Unfortunately I would not say that it succeeds in this. This film doesn’t really have much going for it and will end up being forgotten in the end.

The movie starts with Grady getting a shave and preparing his new guise as he gets to work on murdering another family. The guy has been unstoppable for a while now because his charms are so unbelievable that people just want to marry him right away. He only goes after families that are missing a father though as he aspires to have the perfect family. Well, he meets Susan at the supermarket and they quickly hit it off. They get engaged very quickly and Grady figures he has the perfect setup here as nobody suspects him. Well, Michael returns from military school and immediately distrusts Grady. What can the villain do now?

I did think that early on there wasn’t much of a good reason for Grady to be suspicious at all. We get the ominous music and all as Michael peers down the stairs and shoots looks at Grady but you just don’t really get it. Sure, you get that in general Michael isn’t happy to have anyone around right now but Grady helped get him back into school and even promised he would help make sure Michael isn’t sent off to military school again. Take away the shady music and as the viewer you would think he is doing all of the right things.

So I didn’t think the suspicion was all that earned initially. Of course as the film goes on then Grady gives him a lot of reason to be nervous and upset but it definitely takes a long while to get there. As a character I’m glad that Michael’s a little older so he can actually fight but I wouldn’t call him all that likable. It feels like he’s always trying to start a fight and is awfully defensive about everything. He’s rather annoying the whole time.

His girlfriend Kelly doesn’t really get much to do here. You could take her out of the film and not much would change. She tries to at least keep Michael from making a lot of mistakes like spying on Grady or digging into the past which makes sense since it all seems crazy from her point of view. Ultimately she isn’t able to stop him though and both of them have to really brace themselves for the climax.

I wouldn’t say Susan is a very likable character here either. As always she falls hook line and sinker for Grady to the point where she will not let anyone even think about looking into his past. She doesn’t find anything particularly suspicious about him and just goes with the flow the whole time. I think that would be admirable if they have been together for years and the trust is completely there but everyone has a super valid point when they mention that she doesn’t know much about him. He shows up out of nowhere and suddenly she trusts him 100%? It’s all just way too fast and part of what’s hard to buy about these films is how easily Grady is able to show up and get married each time. Cmon now.

At least the ex-husband Jay does decently well here as he suspects the guy and finds out the lies pretty quick. Unfortunately he isn’t too smart in how he handles the follow up. Look, if you’re talking to someone and the guy just walks out of there then you should probably be careful about following him. He’s clearly not afraid to lie to his family so what else do you think he might do to keep his secrets? The whole scene with Jay is rather tragic too since he gets the longest death with nobody to help him.

Finally you have Grady but there isn’t much to say about the guy. He’s just insane the whole time and forgets his identity really quick. Instead of it being a moment of genuine confusion like in the original, here it’s just played off as this guy being off his rocker. In fairness, the guy is completely insane so that tracks well enough. There’s just not anything interesting about him, his goals aren’t anything special. Additionally he’s just too insecure. He murders anyone who even thinks about starting a rumor on him which just makes the whole thing more suspicious. I dare say that it would have been smarter to keep everyone alive since it’s unlikely that they would do anything more than talk. Was the old lady really a threat? Really??

Overall, The Stepfather is a film you’ll want to void. I wouldn’t say that it has any particularly interesting characters and it’s as predictable as possible. The violence has been toned down from the earlier installments which is good at least but everyone’s still getting bumped off. Dying through suffocation is always a rough way to go out. It would be nice to change up the formula one of these days and have a new villain show up to stop Grady and make his presence known as an alternate villain. I think something like that would potentially be very interesting. Either way I’d recommend giving this one the skip, it’s not going to do anything for you.