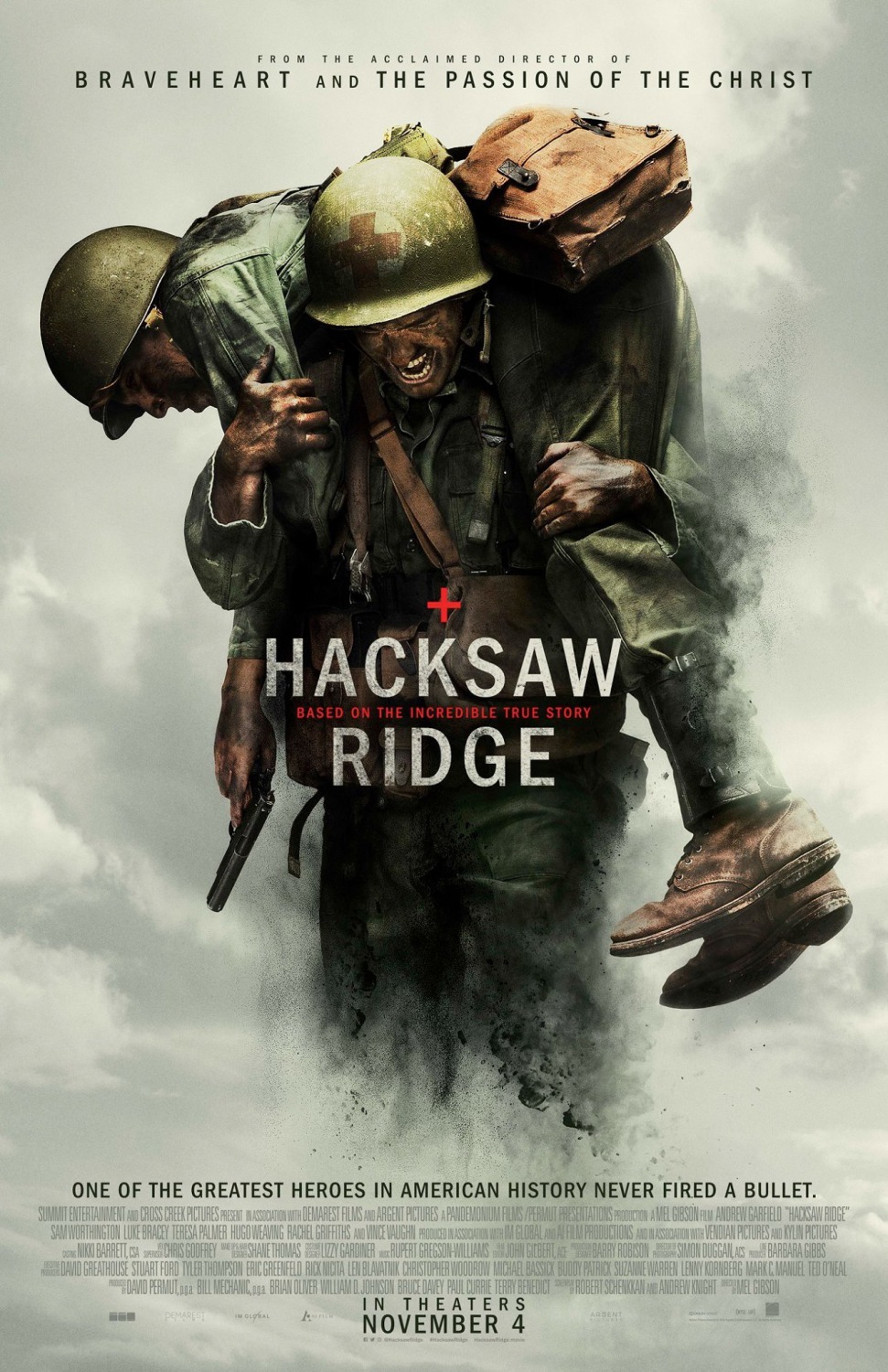 Hacksaw Ridge is a war movie based on a true story where a soldier was able to stand his ground and help out a lot without firing a single shot. It went against his beliefs in the Bible to take another life under any circumstance. As you can guess this would really be put to the test in war since your life is constantly in danger. It makes for a pretty intense film and you really see the many struggles the lead had to go through.

The movie starts off with introducing us to Desmond who is all set to join the military. He falls for a girl named Dorothy and the two of them end up getting together fairly quick but she isn’t thrilled with his decision to join the army. His father isn’t pleased either but Desmond ultimately decides to go forward with this and then begins to get hazed by the rest of the army recruits. They all take it very personally with his deciding not to take up arms and feel like he’s also judging them to an extent. The hazings only continue to get worse to the point where Desmond may as well be in an enemy camp.

One thing about this film is that you’re quickly not going to like Desmond’s fellow soldiers at all. Sure, they eventually start to get better but the sheer degree to which they would attack Desmond and make his life as painful as possible is not something that you can forget. The fact that it was allowed to happen at all is pretty awful and the bosses were in on it as well. They showed that the army had no tolerance for Desmond whatsoever.

You can understand their being worried if Desmond is the guy who is backing them up and they could be in a dangerous position but it doesn’t mean you should go around beating him up yourself. It’s almost like turning their fire to a civilian. It defeats the whole purpose of fighting in the war right from the start. It’s just unfortunate that there weren’t some more good men in the squad to have had his back. Desmond had to fight for everything tooth and nail.

The film is suitably very somber and dramatic as Desmond tries to stay true to his convictions the whole time. Ultimately the army never succeeds in breaking him and so Desmond stays true to the path. This certainly comes in handy to the army during the iconic battle at Hacksaw Ridge. Desmond had to survive in a really brutal environment for quite a long time so that was as impressive as it gets. In a way I guess he was used to being in hostile places.

His skill at tying knots and maneuvering around the battlefield came in handy as he saved many lives without having any true form of backup. Nobody could deny his ability by that point. So he’s definitely a great main character. You couldn’t ask much more from him than what he delivered because he really did everything. Meanwhile Dorothy and his father may not have been thrilled but both of them did come up to bat for him when he needed it. From appearing at the court martial to giving him encouragement all the way through. They definitely helped out quite a lot.

By the end of the movie you like to think that the companies will be a little more understanding next time there’s someone who enters in but doesn’t want to fight. Ideally you would hope that the next guy would be treated well even if he doesn’t have such a big chance to prove himself.

You don’t want the results to be what made the difference here, but the concept itself. A good deal of the film is about the hazing though so if you’re not up for a rather cruel affair with everyone being awful to Desmond then you’ll want to re think watching this one. It feels like they put a lot of effort and research into this so I’m betting that the facts are fairly true to what happened but that won’t make it any easier of a watch.

It’s not like the war scenes are going to be very happy either. Quite a lot of people die there as America was completely outgunned on the ridge. Surviving at all amidst the bomb strikes and reinforcements was really difficult. If not for Desmond it really would have been a total wipeout there. The larger firepower just wasn’t as effective since it kept missing or not downing all of the enemies at once.

The only part of the film that’s really light would be some of the opening scenes as we see Desmond’s life before the army. His town seemed nice enough and he had a good gig there so it was impressive that he would risk it all to serve his country. At the end of the day he wanted to do his patriotic duty to help out and he certainly lived up to that.

Overall, Hacksaw Ridge is a really intense film. It’s not really going to be a film that you end up rewatching as it’s not the most pleasant title out there but if you don’t want to read the Wikipedia entry on the battle, this is a good way to get a lot of the facts and events in one solid package. Then you’ll be able to follow along when you see people talking about this battle. I’m not sure if it’s an item of everyday conversation wherever you are but you never know when it may be brought up at some point.