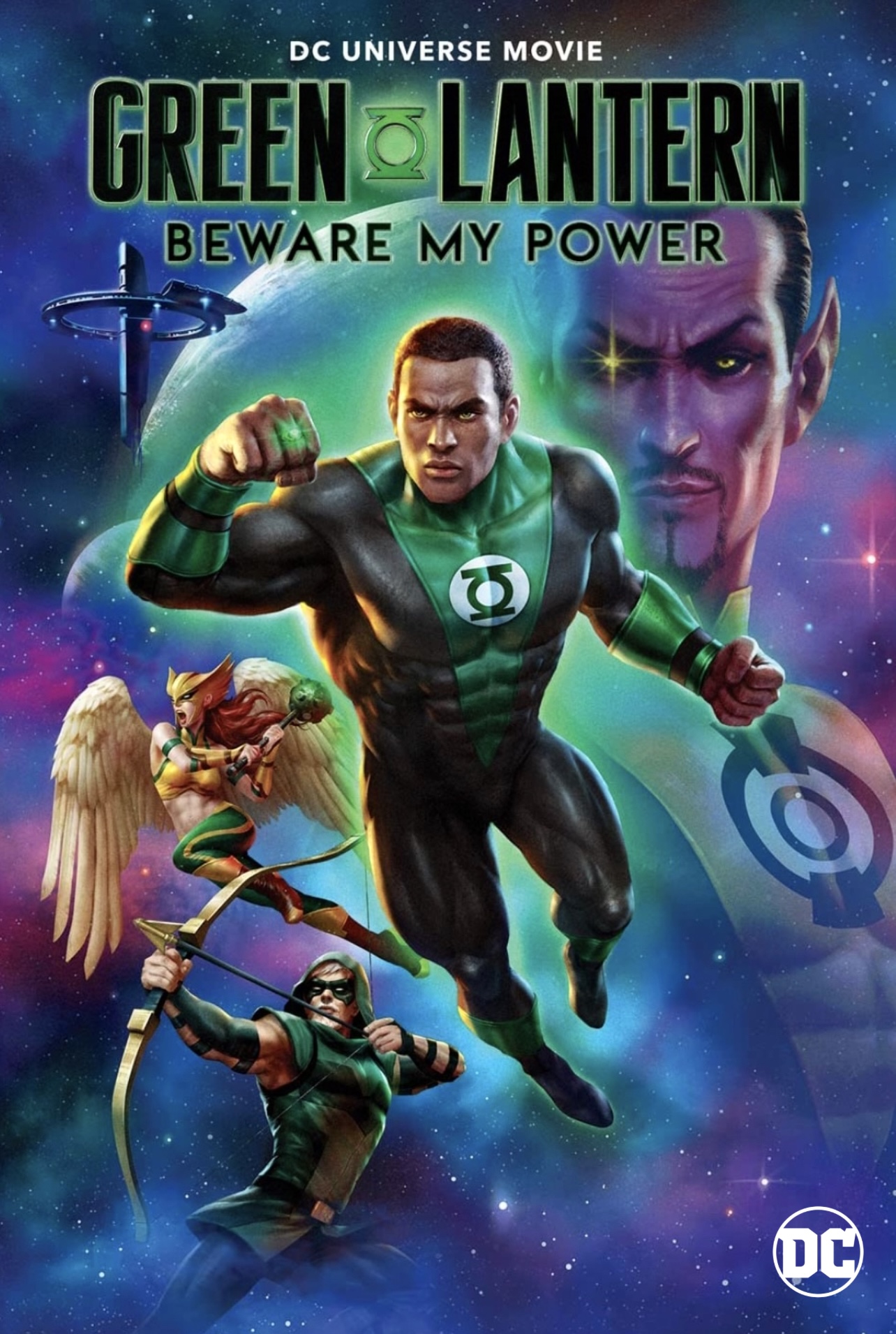 Green Lantern’s really done well for himself. Getting 4 movies at this point is more than most heroes. Of course the main character does change as Hal was the main character in one of them, one was an anthology, and now this one is for John Stewart. I’d say the films have been solid and this is another good one to add to the pile. There may be some decisions made in the film that I thought were rather spotty but all in all this will fill the bill if you’re looking for a fun story and some fight scenes.

The movie starts off fairly quick as we’re introduced to John Stewart who is trying to lead a quiet life now. He was working with the army a while back and seems to have a little PTSD. Well, the quiet life is over as an alien crashes and as he disintegrates into nothing, gets John his power ring. He will now be the Green Lantern but unfortunately the ring doesn’t exactly come with a manual and it’s hard to get any long explanations out of it. One thing leads to another and Green Lantern finds himself aboard the Watchtower. The Justice League needs his help to find out why John got Hal’s power ring and they’re also going to need to stop a big intergalactic war. Guess Green Lantern won’t have any time to rest here.

So off the bat I do like the animation here. The colors are sharp and we get some solid fight scenes. The character designs are good and this looks like a modern movie all the way through. There were no cutting corners or animation cuts here. The soundtrack is a little more forgettable but I definitely wouldn’t call it bad either. It just could use a little more flair to stand out I’d say. The movie’s got good pacing as well and never drags on. I’d say the replay value in here is also considerable.

John Stewart makes for a very good Green Lantern. He does get the hang of fighting fairly quick. He may not be thrilled about the role but doesn’t let that stop him from helping the heroes out. They know that they can count on him and that’s the important part. Even when the league, particularly Green Arrow is always throwing shots his way, John doesn’t let it get to him. While the situation is all very grand, it never gets too big for him. I see John being a great Green Lantern for this continuity.

The Justice League itself isn’t too impressive right now so they need a lot of help. Of course the big 3 weren’t around so that’s part of it but without them the league is basically Martian Manhunter, Green Arrow, and Vixen. Arrow can’t fight a whole lot as seen when he shrugs at Vixen wordlessly asking him to help. Vixen is decent but her animal based abilities are never too impressive and Martian Manhunter is the only real power hitter on the team. Personally I think Green Lantern could take down all 3 of them if he really wanted too. They also didn’t do a good job of talking things out as they jumped right into action. I like to think Superman would have handled things differently here.

Green Arrow’s role is the biggest by far though. I think he talks awful big for not having any special abilities though. I like that they incorporated his friendship with Hal here as that’s mentioned a lot. I guess they’ve already been on a lot of missions by the time this film takes place. Once he gets to known John, Arrow stops being so aggressive but it’s telling that initially he’s more of a jerk.

While not a league member, we get to meet Hawkgirl later on and she’s definitely solid. Hawkgirl is always ready for a fight and is particularly bloodthirsty here. As a soldier she is ready to just destroy anyone who gets in her way, no questions asked. At times this gets in the way of basic strategy so I wonder just how good a soldier she really is. I suppose you can get away with a bit when you’re such a strong fighter though. I’d be cool with Hawkgirl joining the team later on, they could use an extra fighter like her.

Then there is Adam Strange who was a lot of fun to see. The movie takes a lot of queues from his classic comics even down to the laser blast that’s always hitting him. The whole thing is really crazy and I like how much he embraces this. Some characters would be depressed at this point while Strange takes it in stride for the most part. He’s certainly not happy about this but he makes it work.

Now for the parts of the film that were a bit weaker. For starters, I didn’t really care for this version of Sinestro. I can’t go into too much detail on it here without spoilers but he’s not the super confident leader that I’m used to. He has his moments and all but as the film goes on you start to get more nervous. The way it all ends just wasn’t a great look for him. Meanwhile I also thought the film removed too many big lore items considering how new this continuity is. Something happens on Oa that shakes things up and while it’s a bold move, I dunno about it.

Usually you want these guys around for the end game. Technically speaking Oa is always one of the big powerhouses in the universe. It’s not easy to infiltrate or take these guys out and it makes sense since one Green Lantern is already a planetary threat. Throw in a whole planet of them and anyone would have a hard time. The reasoning behind the mystery is something I can get behind but the big issue is that it leads to more power level issues down the road.

I like a good mystery and the film delivers on this but the answers just aren’t super satisfying. The villain here is apparently someone who’s good enough to basically take down a planet and that was before being heavily amped up. After that you should need someone like Superman to stop him. The way the film handles the climax is just on the cheesy side. The power levels were just too wonky to ignore because of how big the gap was. The film really would have needed to change the backstory of what happened to Oa if it wanted us to buy into this.

Also, the film does Hal Jordan dirty. I can’t go into more specifics on this either but it may even be worse than his appearance in Justice League War. (Which made him look really bad) This was a big mistake if you ask me. Hey the series definitely tried its share of risks, that’s for sure, but in the end it felt like they all just ended up backfiring here. The concept of the mystery is sound. A comic book, mystery movie sounds great and I was engaged with what was going on but of course the rule of thumb is always that a mystery is only as good as the resolution. Since the film didn’t really stick the landing, that hurt a bit.

If there’s something I would remove from the film it would be the PTSD subplot for John. I didn’t feel like it actually ended up really going anywhere. I suppose it helped him know not to cross the line at the end but I feel that’s something that could have happened anyway. It’s not like he’s usually a murderer or anything like that. If anything this makes him come closer and the plot just felt a bit random.

Now there are two scenes here where a hero murders a villain and characters get a bit shocked so I thought I would delve into that a bit. It’s well established that heroes should not murder villains. That’s a full stop there. The only times it works, not that it’s acceptable but where the hero won’t get too much backlash is if it’s accidental or a way he could not have predicted. Like Superman’s fighting a villain and his next hit happens to destroy the guy. Well, it’s Superman so that would be national news but you could get it. Or Superman tries to save someone but can’t hold on and the guy falls.

These aren’t cold blooded moments. Well, in this film both murders feel like that to an extent. The first villain dies because he took two leg shots and then a blow to the head. None of the blows even looked lethal so I remember being surprised that he died. The most shocking thing here was probably how the hero reacted but the murder itself just didn’t feel too crazy to me because this is a basic combo that you see people do. Batman’s done way worse and the villain survived. It’s something I’ve given some thought to in that it can often be hard to fight a villain and not destroy them by mistake. All the time you see heroes going all out and the villain keeps dodging blows that could possibly have been fatal. I’ll call it the Danger Room syndrome where everything works out for the best but it very well couldn’t have.

The second one is more of a full murder as the hero shoots the villain but was about to be murdered himself. So again…perhaps surprising to the rest of the heroes but it was a do or die moment so it didn’t feel too egregious. I’d make the case that neither murder was particularly cold blooded here. It did make for an interesting subplot to watch out for but it makes one twist a little too obvious so it felt like the film tipped its hand early. I guess the alternative would be not having any hints though so I totally see why it was played this way.

There’s not a whole lot more I can say about the plot since this is a mystery so the less you know the better. I can say that it’s an enjoyable ride all the way through though. Because the film is in a continuity, some of the decisions here will unfortunately affect future installments but be that as it may, there are still countless directions the films can go from here and I’ll be interested to see how it all pans out. This series has really been off to a fun start so far.

Overall, You’ll definitely want to check this film out. Technically speaking you don’t have to watch any of the other titles in this continuity to know what’s going on. As it is there appears to have been a massive time skip so either way everyone is going into this setting fairly fresh. This will likely be a very important film in the series though because presumably John Stewart will be appearing with the League in future installments so you don’t want to miss the origin. Plus, why miss out on quality fights and animation right?