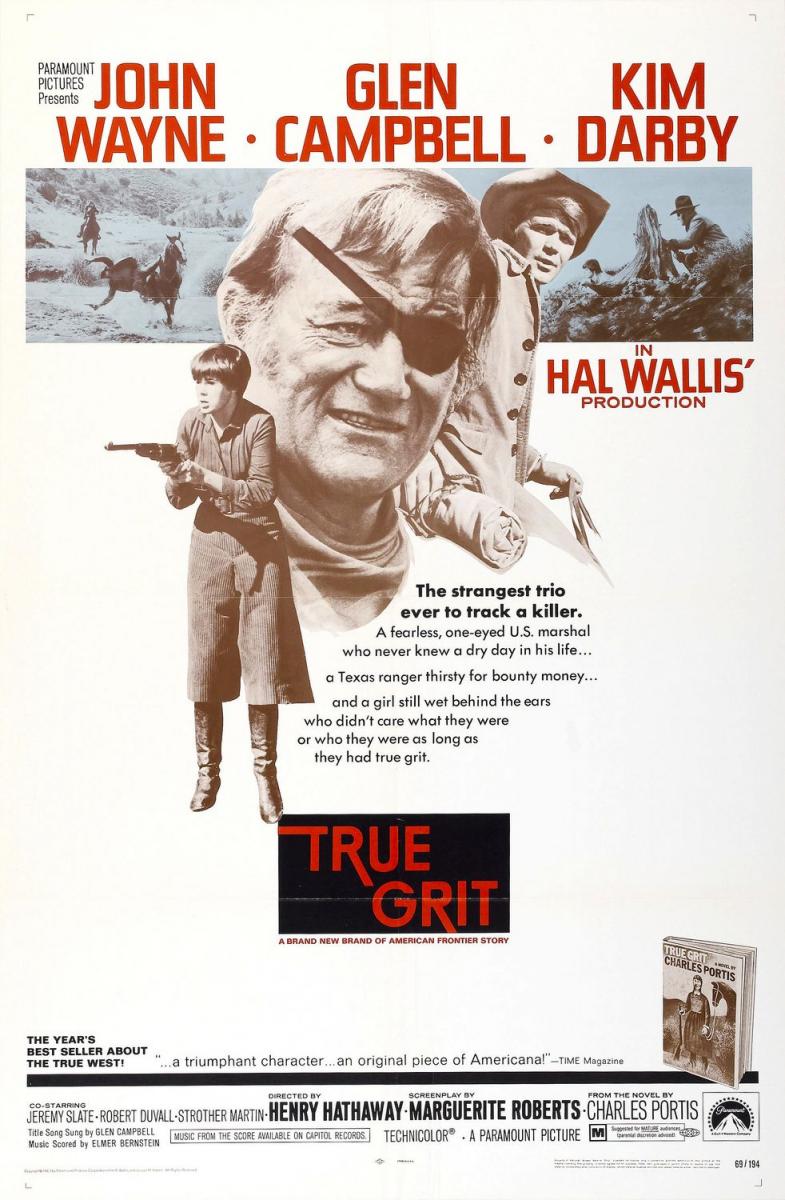 True Grit is definitely a film with a lot of tough characters but unfortunately it took the gritty part a little too far. You’ve even got a horse that dies in this one which was unfortunate. You can absolutely do wild west films without animal violence, I’ve seen it done before. So what made this one fall into that trap? It just wasn’t being cautious enough and that’s a big mistake. It’s a fairly decent film for the most part but one that makes its share of mistakes too.

The movie starts with Mattie’s father getting bumped off after trying to get Tom Cheney to stop trying to pick fights while he was drunk. Unfortunately this drunk had one more bullet up his sleeve and so he then went on a crime spree before vanishing into the Indian territories. He is now protected by Ned Pepper and there isn’t anyone brave enough to go after him. Mattie is forced to try and find someone with true grit. Someone who won’t back down and will keep on fighting all the way through to the end. There is one person that everyone agrees is right for the job…Rooster.

Rooster is one of those guys who always gets his man and doesn’t mind using his gun as needed. You can bet that nobody is going to scare him off easily and that’s exactly the kind of guy Mattie needs. Unfortunately for her he doesn’t take Mattie very seriously and he also charges a lot for his services. While most would give up at this point, Mattie isn’t like most other characters. She works hard and gets the money so Rooster takes her up on the offer. They’re joined by a Texas ranger known as La Boeuf who is also after Chaney for a different crime. Having another fighter on hand would usually be good but the issue is that Mattie specifically wants him to hang for murdering her father, not some other crime. There’s going to be a lot of tension on this trip.

So lets get the bad out of the way first and then talk about the good. The main issue here of course is the animal violence. You never have to have the horse die during the gun fights, just have the human fall off of the horse while it runs away. Or if it’s tough acting you can have them both fall but there’s no indication that the horse is dead. Unfortunately this film goes out of its way to let you know that the horse is absolutely dead. Cmon now that’s not necessary in any situation. The horse staying alive would have been the right move and I dare say that it would have been a lot more inspirational as well.

There’s also a random scene where Rooster shoots a mouse. There was no real need for that either. It shows how tough he is, but we already knew that. This film just takes some easy outs like that which limits its potential compared to other wild west titles. It doesn’t quite beat the last few that I’ve seen.

I do like Rooster as the main fighter though. He is definitely a rather gruff guy on the outside but ultimately he’s pleasant enough to Mattie. You can tell that he’s not going to just run off with the money half way. Rooster takes his job very seriously and is good at it. His reputation is well deserved and he also makes La Boeuf back off when the guy is getting to be a bit too much. Rooster’s one weakness is that he can be a bit of a drunk at times. Usually he doesn’t drink enough to actually make him loose his grip on the situation but it does happen once or twice. It’s a massive weakness in his line of work.

As for La Boeuf, I can’t say that I liked him. His initial scenes were really hard to get around like when he first meets up with Mattie. The guy wants to take Chaney down too but loses his cool almost immediately and just does not seem like a good guy. Unlike Rooster I would not trust this guy at all. As the film goes on he gets more reasonable but either way I wasn’t really a fan of the guy.

Chaney is a super petty villain all the way through. He really had no good reason to get Mattie’s father except that he was drunk and didn’t know what he was doing. It’s clear that he was always a bad guy based on the crimes they described for him afterwards though so the drink isn’t a full excuse. He’s just a bad guy but with no master plan or any interesting qualities. You’re just waiting for him to be taken down later on. Mattie should have just shot him again while she had the gun. Everyone always seems to freeze up in these films but if you’re face to face with someone that’s stronger and faster than you, you need to blow him away before it’s too late. Once he’s within arm’s length it’s over.

Ned Pepper was a lot more interesting even though his role is much smaller. I liked the lore with how he fought Rooster once before and is effectively the only one that got away. It makes for an interesting past there and now this guy felt like a true threat. The movie’s focus isn’t on him so he doesn’t appear a lot but at least this way we had one super formidable fighter.

The gun fights are solid here. We see one battle where Rooster has to go up against 4-5 guys on his own which was really impressive. In general he always makes his shots and considering that he’s so old by this point, he has a lot of stamina as well. You definitely feel secure having someone like Rooster on your side. It took him and the Texas ranger a long while to get to Mattie near the climax though which almost cost her. I know she fell down quite a bit aways but I still didn’t think it would take so long to get down there. Maybe they were afraid of falling too.

At the end of the day Mattie gets a lot of credit for being so persistent as well. Pretty much everyone just told her to drop the case after a while because it would just be too difficult to get her justice but she didn’t let them get to her. Between locating a bounty hunter who would help and raising the funds, Mattie really earned her victory all the way through. She was even able to effectively haggle prices with someone for the horse and her money at one point. I also liked how she would constantly mention her lawyer. When he actually appeared near the end that was fun. He’s the kind of character who can give you a good laugh but deep down you know that he means business.

Overall, True Grit really messes up when it comes to the animal scenes but beyond that it’s a fairly decent wild west movie. I think they could have made the Texas Ranger a little more likable though as it would have helped to improve the banter with him and Rooster. That’s something that can be a lot of fun to have in these films but it doesn’t work quite as well when you’re rooting for the guy to get taken down the whole time. I do think Rooster would have won if they ever did get into an actual fight though. A prequel about Rooster’s days in the army could also be interesting since it sounds like he saw a lot of action there. If you like Wild West films a lot then this is probably one you’ll want to check out but if not, there are a lot of other titles you could watch to start your journey into the genre.