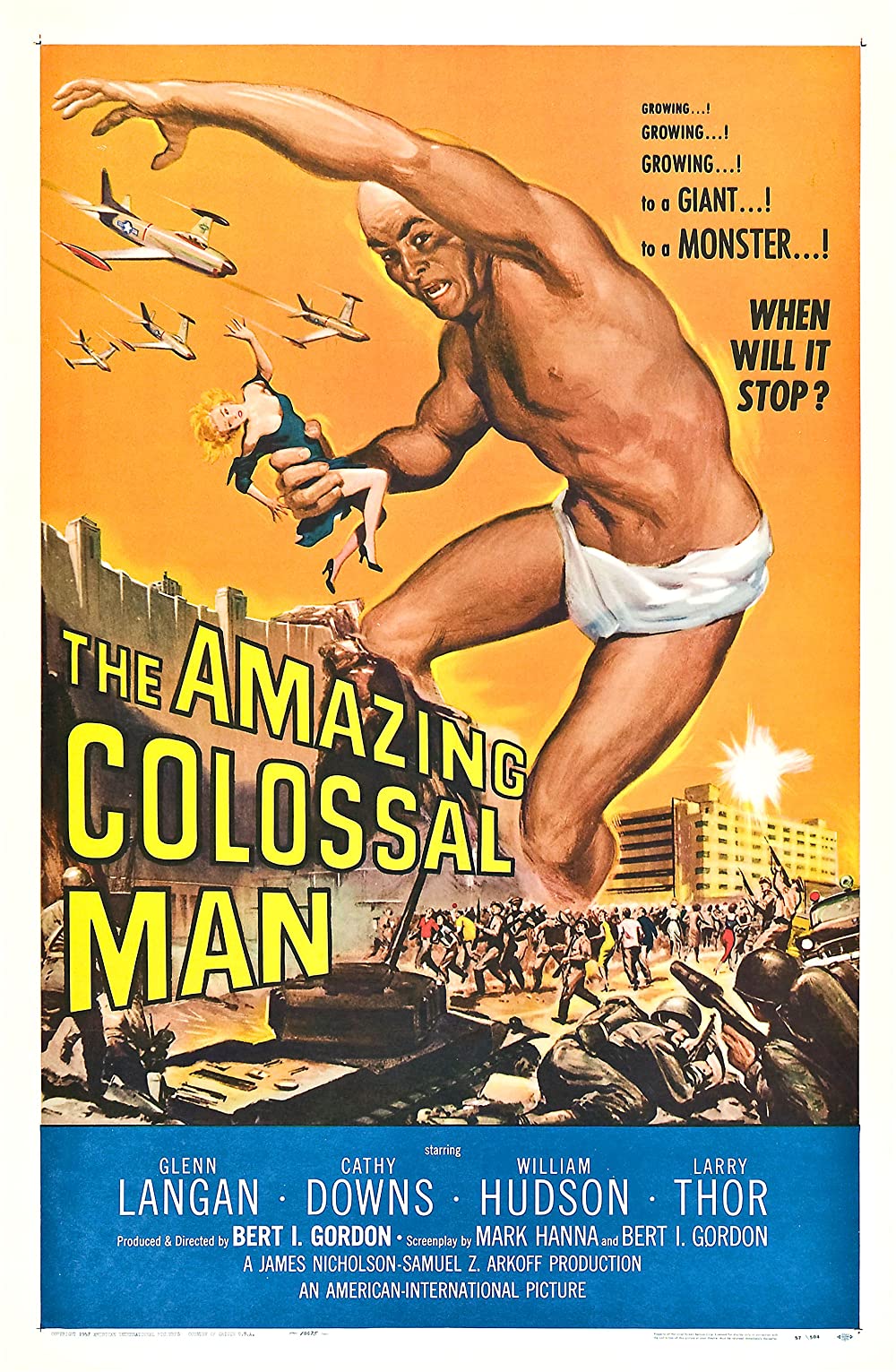 It’s time for a creature feature film of sorts even though there isn’t actually a Kaiju here. The movie just falls into that kind of style and it works well. The movie’s very low key and slowly builds towards the end but so long as you’re fine with not really seeing the Colossal Man get any action for a while then you’re going to be in for a good time here.

The movie starts with Glenn and the rest of the army awaiting a big army test. They’re testing a powerful bomb/weapon so nobody is to get close. Unfortunately, Glenn notices that there are some civilians in the line of fire after a plane goes down so he dashes over but gets hit by the radiation. This causes Glenn to start growing to an incredible size. The plus is that this heals all of his burns like a sort of regeneration but the downside is that his heart isn’t growing fast enough and he’s also turning insane. Is there any way to save Glenn or is this game over for him?

His fiancé Carol tries her best to help Glenn out but the main issue in the film is that there isn’t really a way out. There is seemingly no cure that will work in time and in the meanwhile Glenn is in constant pain. I think that’s part of what makes this one of the roughest trials for a lead here. It’s a pretty hopeless situation even if he wasn’t going crazy. Of course if he could have helped them that would be great but he lasted a while before cracking and it wasn’t really doing much.

I can’t say that I liked Glenn much by the end though. Even if turning giant was part of the issue, it would have been good if he could have stayed strong. Maybe have the government start acting shady which is what gets him to start being a little paranoid and you go from there. It would definitely help him out as a main character and make him more sympathetic towards the end.

There are two main adults on the government side in Paul and Eric. They try to help manage the Glenn situation but I wouldn’t say they do a terrific job. Part of why Glenn cracks is because nobody is really telling him much. Sure, they do tell him stuff like they’re looking into the issue and all that but nothing concrete. After a while it’s clear to him that they’re leading him on and I don’t think he’s totally wrong about that. Any cure would be a longshot and might not even make it in time.

I also think using a circus tent as a base probably wasn’t the best idea to his already damaged psyche. Surely there could have been other large areas to use that wouldn’t have been quite as insulting to the guy. If the film could have used any extra boost though, it’s that I wouldn’t have minded seeing the Colossal Man destroy more buildings and such. The actual destruction is kept fairly minimal probably so the film wouldn’t make Glenn seem too irredeemable.

This is also probably the kind of film that would be more difficult to execute in a modern setting. As the film is low key it can only really work with the dialogue being up to par. Of course a modern film would likely add a lot of action which would make the point moot as that’s another way to succeed but if you’re going to do this through pure dialogue then you need the old way of speaking like in this film. Then with that you’re all set for action.

Of course a modern element that could work would be for Carol to have a more active role in the story. Something beyond just walking around and asking for questions about Glenn. Not that she didn’t do a good job with this but it’s still a more passive role as opposed to her knocking out some guards to find him or something like that. I suppose it’s nice that the government wasn’t evil in the end this time though.

I absolutely would not want the job of feeding the Colossal Man though. I was even a bit surprised that the guy escaped with his life since it really seemed like he could be squashed at any second. Glenn was definitely not playing around by this point and was pretty much all gone. The ending underscores why he was ultimately not a huge thread though. At the end of the day unless you’re bullet proof then there is only so much damage that you can pull off. In a way the government could have stopped him at any time and you the viewer knows it.

Overall, The Amazing Colossal Man is a pretty good film. I wouldn’t call it amazing or anything but it gets the job done and follows the classic formula of a creature feature. In fact it’s so direct that there isn’t a whole lot to discuss compared to other films. You could probably guess most of the story beats just from the title without even watching the film. The writing is solid and the character cast is good which makes for a solid combo. The movie goes by quickly and has a good amount of replay value. You’ll definitely want to go into this expecting more of a drama film than an action one but as long as you go in with that mindset then you’ll be all set.