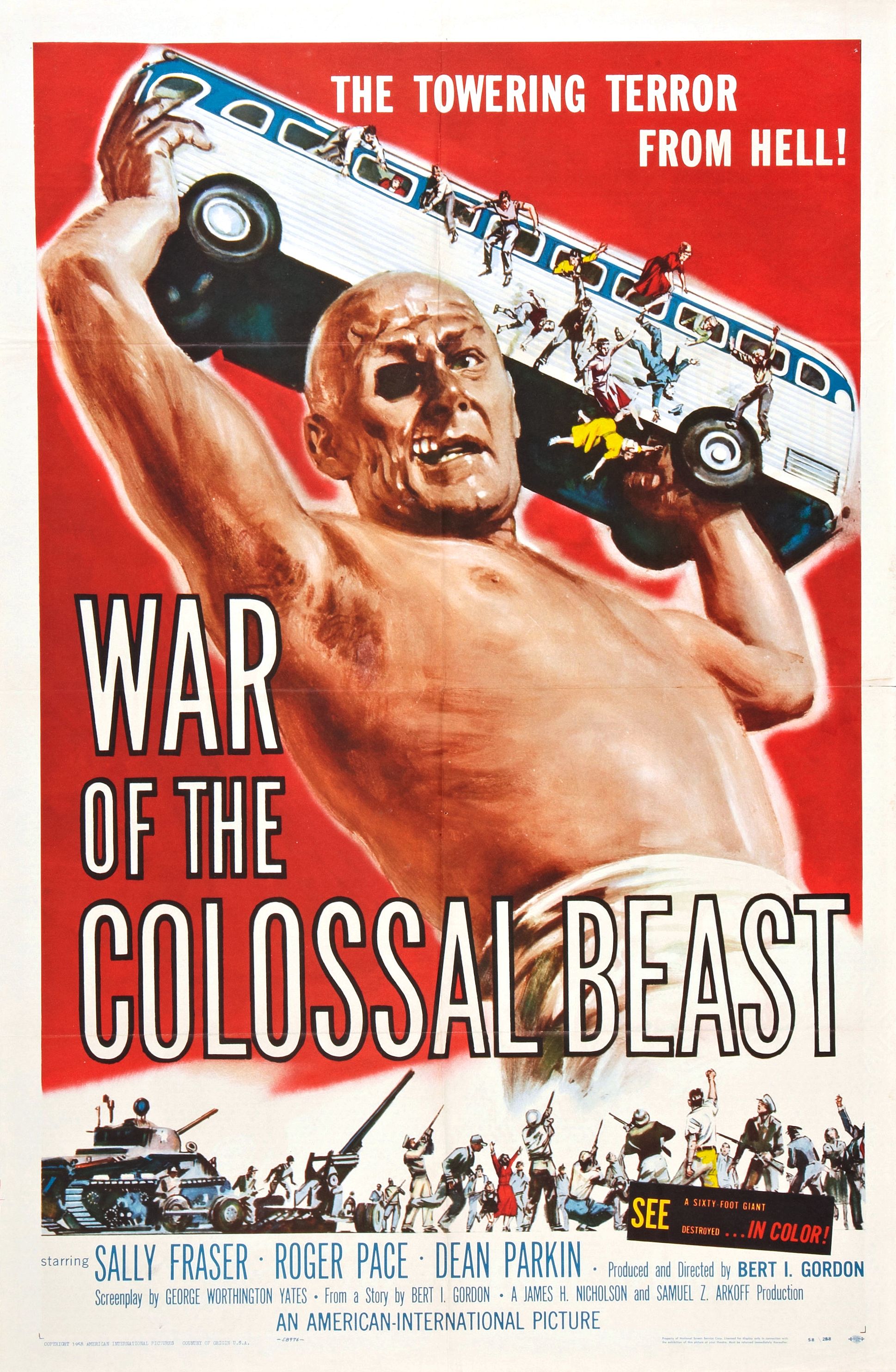 It’s impressive that the first Colossal Man movie got a sequel but unfortunately this one isn’t quite as good. The decision to turn Glenn into a mindless monster was definitely an odd one and doesn’t work as effectively. Part of the fun in having a giant man is seeing him interact and how he adjusts to this. The first film may have been leading up into having him turn mindless but going all the way with it was definitely a big mistake.

The movie follows Glenn’s sister Joyce who has been trying to locate him for a while now. It’s actually a bit of an odd choice right off the bat. Why aren’t we still following his fiancé Carol? I suppose the real life reason would be that they couldn’t get the same actress but I feel like that wouldn’t have been a big deal. Either way Joyce functions in pretty much the same way as it’s her turn to play detective this time. She does well in tracking Glenn’s possible whereabouts until she actually gets to the right place.

Ultimately there isn’t a whole lot she can do to stop him but she gets the government on the trail so that they can capture him. Unfortunately a cure will be difficult as always so they are basically delaying the inevitable as he is still a big threat that could hurt just about anyone. The government’s main liaison this time is Mark and he makes it clear that the army will take care of Glenn if he poses a threat. So getting them involved was a bit of a risk but it was still Joyce’s only realistic option. Otherwise Glenn was already being a threat anyway.

Again this is weakened by the fact that he is so mindless now though. He can only just roar endlessly the whole time so there is no chance for dialogue or anything like that. He’s just completely lost his mind and that doesn’t make for an interesting villain. You could only pull that off if this was a creature with a really cool design, but a giant human? No shot at making that work out, it’s just not in the cards. Also I thought the design wasn’t as good. In this film they try to show that he’s deteriorated a bit due to the accident from last time but also the radiation. So now part of his skull is showing at all times and so he looks rather beat up. It’s more on the gruesome angle than actually looking really cool though.

The other characters are decent enough. Mark does well in his role and he seems like a good guy. There is a limit to how much he can actually do here but at least he is trying the whole time. It would have been easy to have just ditched Glenn to his fate but he is actually trying to make things work out for everyone. Then you have Dr. Carmichael who is like pretty much every other doctor in these old films. He seems reasonable enough but can’t really work miracles.

I actually liked this old guy who appeared at the start of the film as his driver got scared by Glenn so he had to find the kid. This was really just a way to kick the film off so he doesn’t have a big role or anything but I liked his energy. The guy was determined to get his money back and sue if needed. The kid who got scared was more on the annoying side. I thought all the scenes of him being too afraid to talk at all were really overblown. The movie just had a super slow start as a result and once we got to move past that it was for the best.

The movie still has good writing like the first film but around the board it’s just a bit weaker. The pacing only gets good after the opening scenes and of course Glenn is a big step down with how mindless he is. I definitely would have liked for him to have still had his character. Then the cast as a whole would be a bit weaker although it’s close. So with all of that going against it, there was never any chance that the movie could have beat the original. That wasn’t going to happen but I would still call it a good movie. If you ignore that the first one exists, then it is a perfectly serviceable title.

It doesn’t do anything special but it makes no big mistakes. There’s no moment where you’re really shaking your head here and that’s the positive point of making what I would call a very safe film. You’re not taking any risks or putting yourself out there so the floor is stable but the ceiling may just not be as high. You’re not going to score an 8 with this approach but you won’t likely score a 4 either. It just puts you in an area with smaller variety.

As a final note, it’s a little hard to believe that the Colossal Man was able to hide for so long though. Again, remember that he is basically mindless and he is absolutely huge. Where was he hiding for so long? It was clearly long enough where the government thought he was dead and nobody believed the giant guy could be around. It just strikes me as unlikely that this guy could be slipping around, even if there weren’t security cameras and such back then. They probably should have just said he could shrink or something but of course then it would be a whole new movie. Only other option would be to have this film take place a little sooner, like the next day or something. Even then I question how he made the trip over to Mexico undetected unless he can breathe underwater.

Overall, You’ll enjoy this film if you’re up for a fairly generic creature feature film. This one does have more action than the first so you will actually get to see the Colossal Man in action. It helps to counter the fact that it loses in virtually all other areas. It has less replay value than the first one without a doubt but it still gets enough right to be worth a watch. It has actual flashbacks to the first movie which is nice for continuity. So because of that I would recommend watching the first title before this one. They may be good as stand alone adventures but it still feels like you would get the added boost by watching the first one before this. It may make you end up comparing them a lot but that will just have to be unavoidable here.