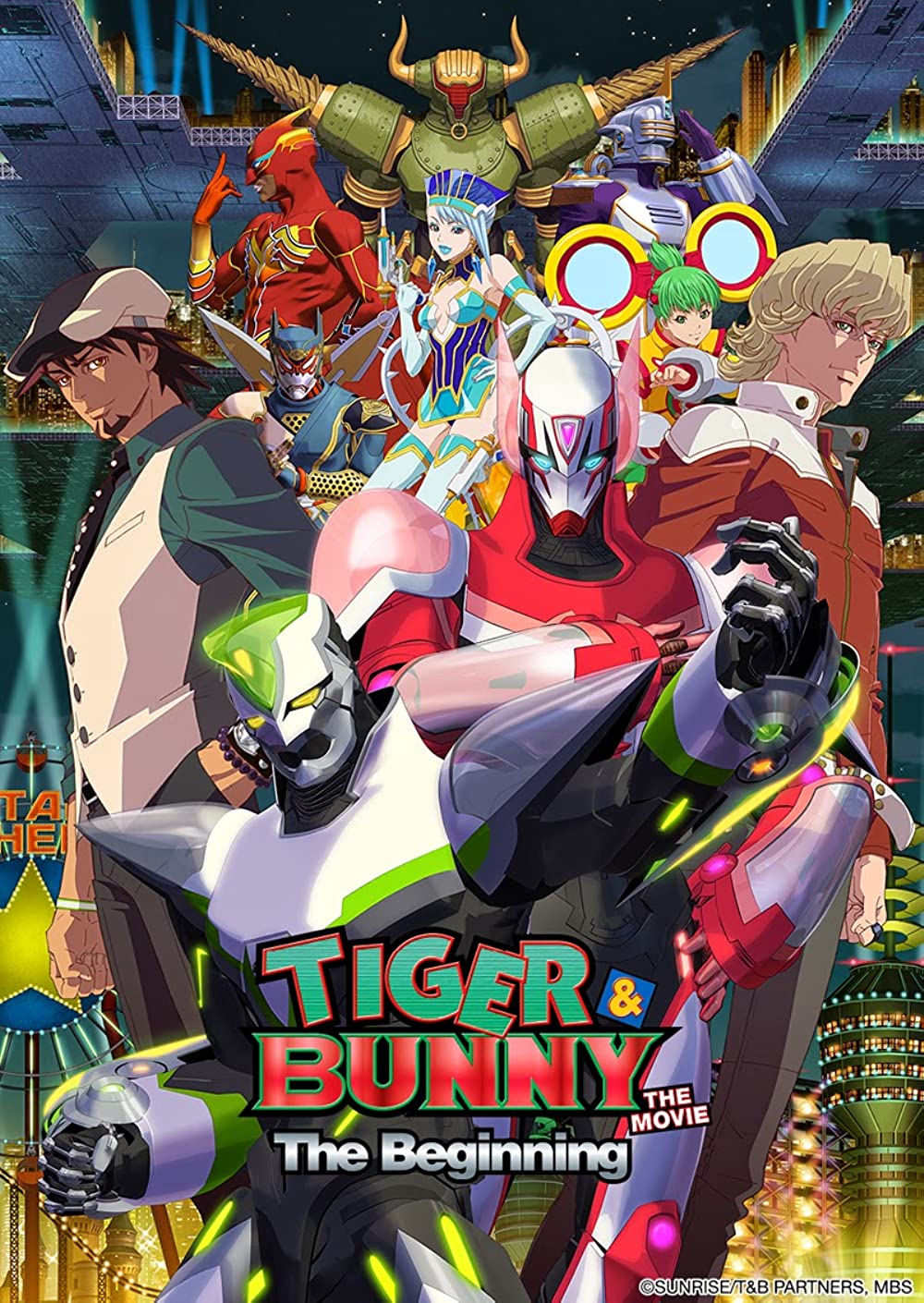 It’s time to check out a film with a very unique style here. See, most of the film is just recapping parts of the TV show without even upping the animation and then you have some new stuff towards the end. I always feel like it’s a bit lazy to do things both ways. Whether it’s framed as a merged movie like Madoka or a movie split into episodes like Demon Slayer, you’re just doing the same thing twice. If you’re going to handle something twice then I want a completely different animation going in there and some changes to the story like how Super handled the Resurrection F part. It may not have been completely different but you didn’t really feel like you were watching the same thing twice. Still, as a stand alone film I suppose it holds its own but there’s not much reason to watch it over the show.

The movie begins by introducing us to the world of heroes which has become heavily commercialized. Various companies own the rights to the various heroes and they all perform as best they can in order to rise up the ranks. Tiger is old news at this point and his company is going under but fortunately he is bought out by a big company that wants to pair him up with the up and coming prodigy, Bunny. Bunny is a modern hero who is completely different in every way from Tiger. Tiger believes in secret identities and doing whatever it takes to save people while Bunny is more by the books and lets everyone know his true identity. Can they put their differences aside to save the world?

Well, this isn’t really a “Planet in danger” kind of scenario but that sounds cool at least. So in readapting the first few episodes you have the duo going up against a giant statue and they meet the other heroes but the big threat comes when a guy shows up who is a big thief. Robin is his name and speed’s his game. He is incredibly elusive to the point where all of the heroes teaming up are having a tough time keeping up with him. It’s almost like he’s mocking them…but that can’t be right…can it? This is another obstacle where teamwork may have to be the answer. That’s what you’d think anyway.

So, aside from the fact that readapting something is a bit iffy, this does work as a stand alone movie to the general audience. So if you haven’t seen the show before then you should be able to understand what is happening here well enough. It’s all about superheroes and fighting crime. It’s not too complicated or anything so it works out. The pacing is decent as well. Now your first tip off that something isn’t right may be with the animation. The movie doesn’t look great, and that’s because it just looks like the TV show most of the time which I already wasn’t very impressed with.

The movie feels at least 5-6 years older than it actually is because you had movies that came out a lot earlier in the 90s that look better than this one. So you can’t count on the visuals to hold it up. Additionally I don’t think the soundtrack is great either. There aren’t too many real memorable tunes. What that means is this feels a bit like a low budget adventure and the story/characters have to hold it up.

And to an extent I do think it works. For example I wouldn’t call this a bad film or anything. It’s not very solid but it is “good” and worth watching. I could recommend this to anyone wanting an action title. I would recommend a long list of other titles first but at the end of the day I wouldn’t be deterring anyone from watching this. It’s fun enough and does the job of keeping you busy for a little while but of course I am hoping that the series can hit the next level in the future.

The villain, Robin is okay at best but he mostly does good by relying on the heroes making constant mistakes. We find out that his ability is actually rather great. He can swap places with anyone and that’s such an overpowered ability for a verse like Tiger & Bunny where nobody is super strong like that. Right off the bat I had a bad feeling about the whole thing because there’s no way this guy should really lose. As long as he plays it smart that is but Robin makes a lot of mistakes and fumbles the ball. It was still fun to see the heroes strategizing and trying to find out ways to stop him though. There’s just not much to Robin beyond the chase.

As for the main characters, they’re decent. I like Tiger well enough as a good hero who wants to save the day no matter what. My only problem with him can be that he seems weak sometimes. Considering how good his powers are, he should be doing a lot better. He can increase his skills many times over with his power and yet he is still being outmaneuvered the whole time. He didn’t do so well against a normal bank robber near the beginning.

Bunny is still my favorite character here. The guy has very concrete goals and won’t be giving up until he has achieved them all. You want someone with that kind of focus on your side for sure and he is good at strategy. You could even say that he steals the show by the end of it over Tiger. It’s not surprising since that’s how things played out in the show as well. He can be a bit mean/rude but that’s just how he rolls.

The rest of the heroes don’t get time to do too much here. As usual Fire Emblem is annoying, Rock Bison seems way too weak, and the others are generally just not super effective even if they mean well. It was nice seeing Blue Rose talking tough here since this is before she started to weak around Tiger. The scene of everyone meeting up to introduce themselves to Bunny was a solid addition by the film. It may not have gone over well but it shows that everyone made the attempt which I think was a good idea.

That said, there isn’t a whole lot to discuss here. In part because the film is mostly recap but also because the story is very by the numbers. From the general plot you can mainly guess how the film will play out. I’d say the only twist would be how they deal with Robin and I was a fan of that. The heroes didn’t handle things too well for most of that fight so at least they had a plan by the end of the movie.

Overall, Tiger & Bunny is best experienced by watching the show since you can then seamlessly continue to the next adventures. You always could watch the movie and then skip the episodes in the show but it feels like more steps compared to just watching the season as you usually would. Go with your gut on this though and I’ll have a review for the sequel up shortly. Then we can really see how that one stacks up and if it takes the franchise to new heights.