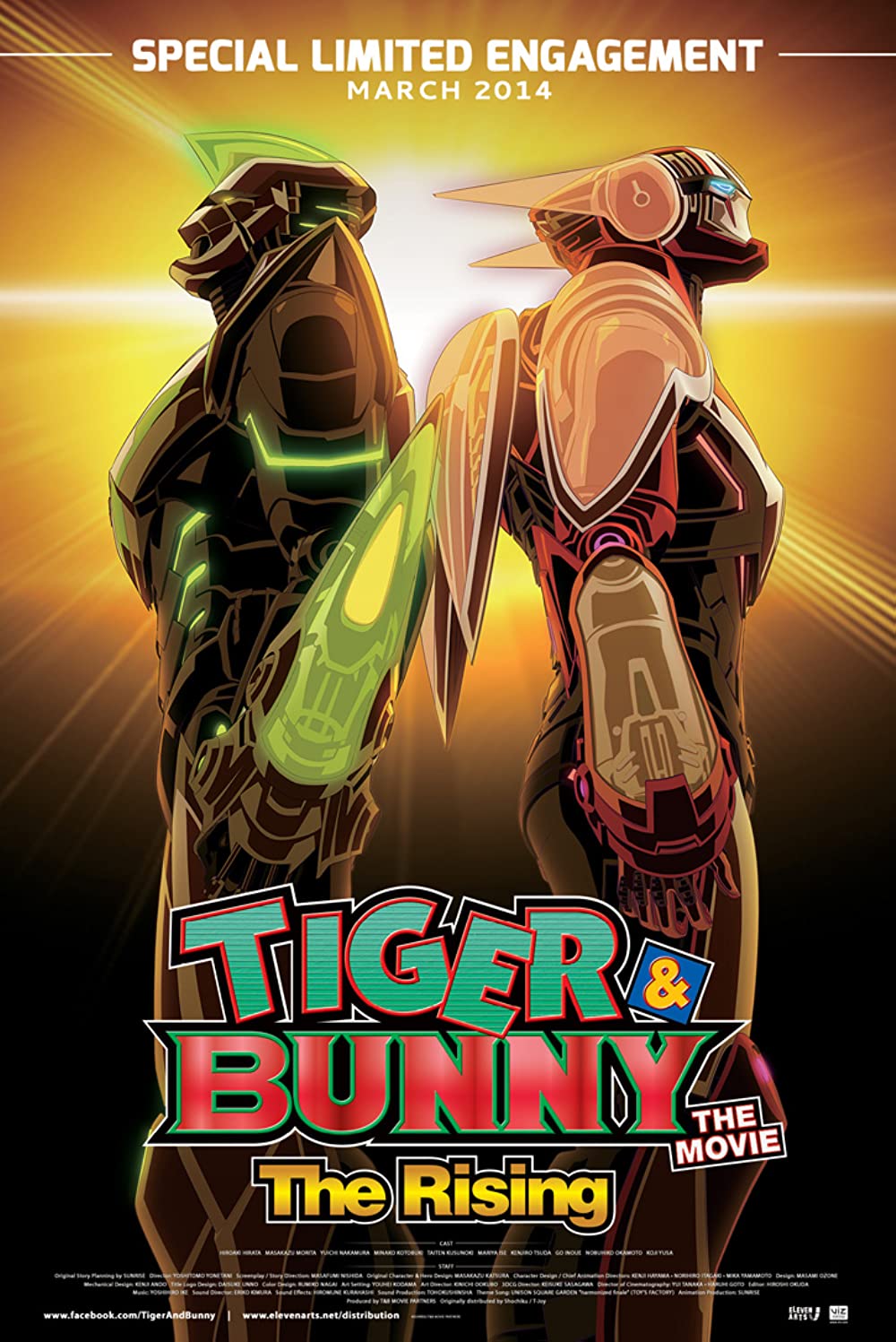 All right, we’re back in action for another Tiger & Bunny movie adventure! This time it’s a brand new story with updated visuals and everything so it’s already showing some different improvements there. I would say this movie is definitely better than the first one. It’s fairly low key and does suffer from throwing the giant opponent who can’t fight back cliché in the climax but aside from that you can tell that it’s trying this time.

The movie takes place after the show so Tiger’s powers are all but gone at this point since he can only use them for super short amounts of time. He and Bunny are now a part of the second division for heroes so in a way you could call them the B team. It doesn’t earn a lot of money though and Bunny can’t help but feel like they should get back into the A league. The test is coming up soon but things take a spin when corporate gets involved. The companies are all bought out by Mark and he wants to change things up. He’s axing the second league and is now pairing Bunny with a new hero called Golden Ryan. Tiger is left out and he’s starting to wonder if he should retire. First he’ll have to stop a new villain group that is re-enacting tragedies from an old play. Can he do it?

For the main plot, it definitely feels like Tiger has to struggle with confidence issues a lot. In the main show when he was losing his powers that became a big thing and now it is resurfacing with how he’s holding Bunny back. He really needs to get his powers back to 100% or this is probably going to keep on happening with him. He handles things mostly well though and tries to make sure that Bunny is set up at least. Although I think the right move would have been to make more of a scene and convince Bunny to stick to the B league. Call Mark’s bluff and maybe he would have gotten Tiger back to the A team.

As for Bunny, well as always he is the big standout hero here. We see how he spends a lot of his free time helping out the orphans and making sure that they have a lot of stuff. Now that’s high quality hero behavior and he even gets them all tickets to the biggest party of the year. Bunny is all about giving back to the community now and you love to see it. He’s also still the top strategist among the heroes and easily the most powerful. He may never end up being the main character as long as Tiger is here, but you couldn’t ask for anyone better as the #2.

The rest of the heroes don’t get a ton to do for the most part. You have Sky High who is still one of the top heroes and he gets to be in the fights. There isn’t much of a character development arc needed for him though. Same for Dragon Kid but it was nice to see her fight more here. We didn’t get to see her have too many serious battles in the main show. She’s always a loyal ally and a fun fighter to have at the ready.

Blue Rose is still acting like a tsundere a lot but fortunately she always makes the right calls at the right times. I was glad that she wasn’t sidelined for the whole fight with trying to put out Fire Emblem’s flames because that would have been a shame. She still gets less action than the others but does contribute in the big fights. Rock Bison has a bit of a subplot where he isn’t feeling like he sticks out very much. So he starts ripping off other characters’ catch phrases and everything. It’s not a good look and starts to just put more pressure on him.

I feel that this plot still isn’t actually finished yet so we’ll see if the next season picks up on it. I feel bad for the guy but at the same time it is true that he is usually lagging behind the rest and taking a lot of Ls. Then we have Origami Cyclone who wants to be able to fight straight up instead of always going for surprise hits from behind. It was an interesting plot although there wasn’t a lot of time for it. Ultimately he did get to try fighting up close and personal but for the most part the opponents here are just a little too high tier for that to work very easily.

Now onw hero who does get a big role here is Fire Emblem. In the show he was easily the worst character as he was always messing with Rock Bison no matter how much the guy told him to knock it off. It was very in line with a character like Puri Puri Prisoner or even Master Roshi with how he would get physical. So fortunately this film doesn’t have any of that as it decides to tackle his plot on a more serious note. Of course that brings up issues of its own and I can’t say it’s the kind of plot that I’m a fan of.

It’s a bit late in the game to try and save his character. Hopefully if he keeps the development then in the next season things could work out but sometimes it’s just a bit too late. Like I never got around to liking Gajeel even though he’s been a hero for over 10 years now. Sometimes it’s just too late and then it’s all game over. Here Fire Emblem is taken out by the villains for most of the film so he’s indirectly causing another hero to be indisposed the whole time and then when he does return for his big fight…he gets taken out rather quickly. I was at least expecting a big win for him. I can’t say that Fire Emblem really works yet and we need more screen time to see if he has really changed or if he’s just going to be acting the same way when he returns.

Finally we have Golden Ryan who is a new hero who has shown up and gets a good amount of hype here. He has gravity powers which is always super useful in any context. I love gravity powers and consider it to be one of the most high-end elements that you can use. He does look really strong here too and automatically became the second strongest hero after Bunny. He can be rather arrogant and all but I’m liking this guy so far. He add a lot to the dynamic and doesn’t feel like just another guy. Actually enhancing the dynamic and changing things up is absolutely what you want to strive for with a new character.

As for the new corporate guy Mark, well he’s just your classic shady CEO. The guy’s so over the top that you will keep wondering whether he is super evil or just shady. Sometimes the line can be hard to distinguish in these things. The rest of the supporting characters are around as well and it’s always nice just seeing everybody again. The movie does have a huge issue with power levels though.

So you’ve got a few villains here, the 3 main ones and the big mastermind. The movie doesn’t bother to give the main 3 names but it was nice to have a full squad. My problem is that none of them should be all that tough. Take the disc throwing girl. She has to go up against Bunny and Ryan which should be the worst matchup for her. Gravity will negate her discs and Bunny has the speed to catch her no matter how many illusions she has. The film has to actively make Bunny and Ryan look awful for her to last so long.

Then you have a guy with super voice going up against Bison, Cyclone, and Sky High. That’s all this dude has, a super sonic voice and yet he’s crushing them with ease. I’d like to see some team work here or even some common sense like dodging the attack and countering with a quick energy hit from Sky High. It seems to me like this really shouldn’t be asking too much. How are these villains who have never really fought before taking on seasoned veterans?

Finally we have the third guy who is a literal old man with a staff and he is crushing Fire Emblem, Dragon Kid, and Blue Rose. I liked his memory abilities which are kind of OP but in hand to hand he should be getting crushed. It is a running gag that the pro heroes are super weak, what with their having trouble with random bank robbers the whole time. Yes, we get that scene again here as the opener where the entire cast of heroes can’t beat one random punk. It’s extremely embarrassing at this point and shows how low tier the fighters are.

I have to blame a good amount of this on the writing though because it just doesn’t make any sense. At least the final boss has a giant form where he’s huge and everything. It may not make for an interesting battle scene but you can see how he would be putting up a fight. That’s the kind of energy that we should be seeing. While I thought the fights didn’t make a lot of sense, I will at least say that the villain motivations were good. I liked how the film executed the reveal on who the mastermind was and why they’re doing this. I thought the motive was quite sound and that goes a long way for a villain. Same for the other 3 who were working for the leader.

So that part was good. Lunatic even gets to appear for a bit but the role was mainly filler here. He doesn’t actually contribute anything to the story except to appear a bit for the fans. It’s really just a cameo that comes out of nowhere, but I appreciate it all the same. As I said earlier, the animation is also greatly improved here which is good. It’s still not going to hold its own against many of the more mainstream anime titles but at least now I can say that it looks pretty good. The soundtrack is still on the forgettable side though.

Overall, It’s nice to have another movie for the series. Even if the stakes might be a little higher here than in the first film, I would say that it still feels like more of a calm movie. Maybe it’s just because you never feel like they’re all in a lot of danger. It still executes just about everything on a higher level than the first film. It’s also nice that each of the heroes at least got a bit to do here even if it wasn’t much and we got to follow them down their paths. I could see some of these plots continuing in the future as well. So if you’re already in the series then this is a good movie to check out and see the characters. You’ll probably be a bit lost if you jump straight into this one though.