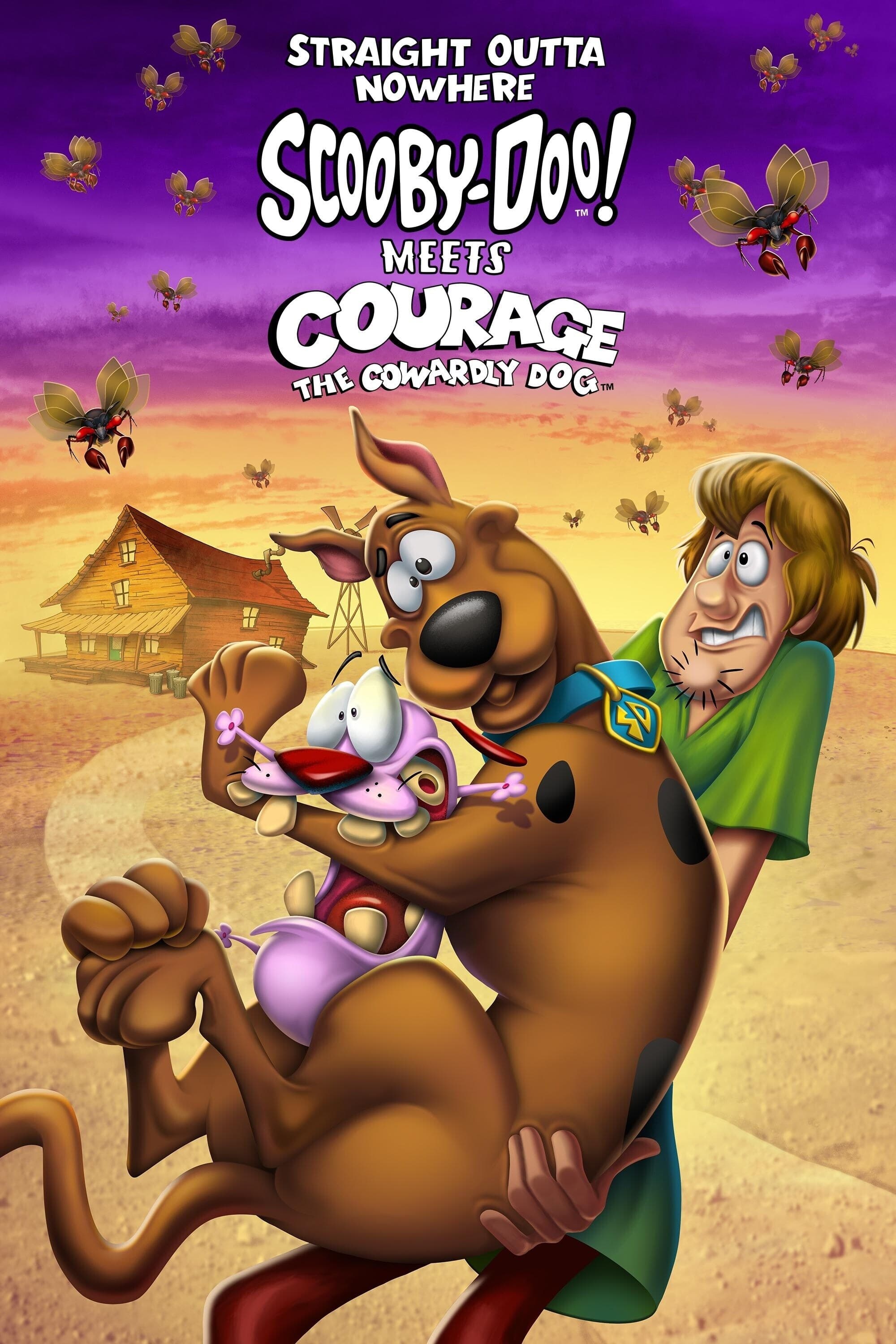 Scooby Doo has returned for another feature length film but unfortunately this one is rather weak. Usually I love crossovers but I felt like for this one they decided the film barely needed a plot as a result. Most of the movie is really just the characters hanging out until the climax. The script isn’t particularly great and the characters aren’t able to hold a story like this up on their own. As a result what you have here is a very unfocused movie with scenes that drag on quite a bit.

The movie starts with the Mystery Gang taking down another criminal when Scooby Doo suddenly runs away. He seems to be possessed due to this weird sound reaching his ears which causes him to dance and move around in rather weird ways. It’s definitely not something he has encountered before and meanwhile this appears to be happening to Courage as well. The two groups meet up and have to try and figure out what’s going on here. This will be one of their toughest cases yet though as the monsters here are very real.

Right off the bat I have to say that I found the sound gimmick to be really annoying with Scooby Doo just having a seizure the whole time. Perhaps it was an excuse for the animators to really show what they’ve got but the scene was dragged out immensely. It was the first hint that the movie was not going to have great pacing this time around. Far from it, instead the movie was going to take up as much time as it could. We then get the same scene with Courage and later on we see it happening to both of them.

It may be quirky and all but it’s not very interesting to watch. It’s just something where you’re waiting for it to end. Unfortunately Courage isn’t a very interesting guest star either. Pretty much all he can do is repeat what someone else has already said. He’s not mindless but he doesn’t have a whole lot of character on his own which hurts the character quite a bit. I was hoping that we would get to see him do something really cool but you have to wait until nearly the very end for that. I was glad he got something though but in the end I can’t say I’m a big fan.

Muriel is nice enough but there isn’t much for her to do. She’s the really pleasant character but that’s the extent of her character. At least Eustace has a lot to do since he’s the super mean/grumpy character who is always complaining about everything. I can admire the consistency there if nothing else. The guy is so over the top that it actually gets to be fun as you try to see what he’ll say next. That said, his character is hurt quite a bit by a random song that comes up during the movie. The song wasn’t even remotely good and was just a waste of time.

When your movie doesn’t have a big focus then you have to throw in scenes like this and it’s a really bad sign. It’s the definition of a filler scene. I also thought that the running gag of him grabbing a mask to scare the characters was a bit overdone. They are short scenes each time but you didn’t have to recycle the same joke over and over like that. At most you do a joke twice but when you do it more than that there better be a really good story reason for it or something. Otherwise it’s just obvious stalling again.

It just felt like the movie didn’t have many ideas for this film. There were some brief things I did like though. We had a nice action climax at the end with Courage and the monster. The various creatures reminded me of the Brood with how many there were and how they would hide underground. It was nice to see Daphne, Fred, and Muriel taking them down during the movie. That probably could have had more of a sense of danger but I’ll take a fight whenever I can get one.

We got some nice visual effects during the climax as well like one character turning 8 bit. In general the animation here was really solid as always for Scooby Doo. I’ve always liked how sharp the colors were and it really has a similar style to the DC movies. So on that end the movie hasn’t faltered. The music is okay, I did like the opening credits song at least even if Eustace’s song flopped.

So there are good things in this movie and ultimately it’s fairly short. So even though some scenes dragged on and it had some issues, I wouldn’t call it a bad movie. It’s absolutely one of my least favorite Scooby Doo movies and it has very low replay value so I probably would not end up watching it again but if I had to, it’s not like it would be a big ordeal or anything. It all just feels like a big missed opportunity. A crossover absolutely needs to relish in that fact and just have a lot of fun with the character interactions.

There just isn’t much time for that since Eustace and Courage don’t talk much. Meanwhile Muriel doesn’t have much to contribute in the banter department so we’re not getting far there. The rest of the mystery gang are around but nobody gets any big spotlight moments for the most part. The movie is by the numbers but executing on a lower level than it should have and it’s one of the only Scooby Doo movies where you may even start to get a little bored at some points.

Overall, It’s a fairly harsh time for the film but the positives are still there. It may not have met expectations but it’s still a decently good movie and I’d recommend it to people if they wanted more Scooby Doo to watch. Perhaps it’s a film that will age better in the future although I have my doubts. I’m eagerly awaiting the next Scooby Doo movie to get us back on track. We’ve had so many subversions, crossovers, and themed movies so maybe we should go back to a classic mystery. A haunted library or something with a few suspects and the heroes have to follow the clues. I may not be remembering a movie but I feel like we haven’t had a straight mystery adventure in quite a long while and that’s something I’d like to see.