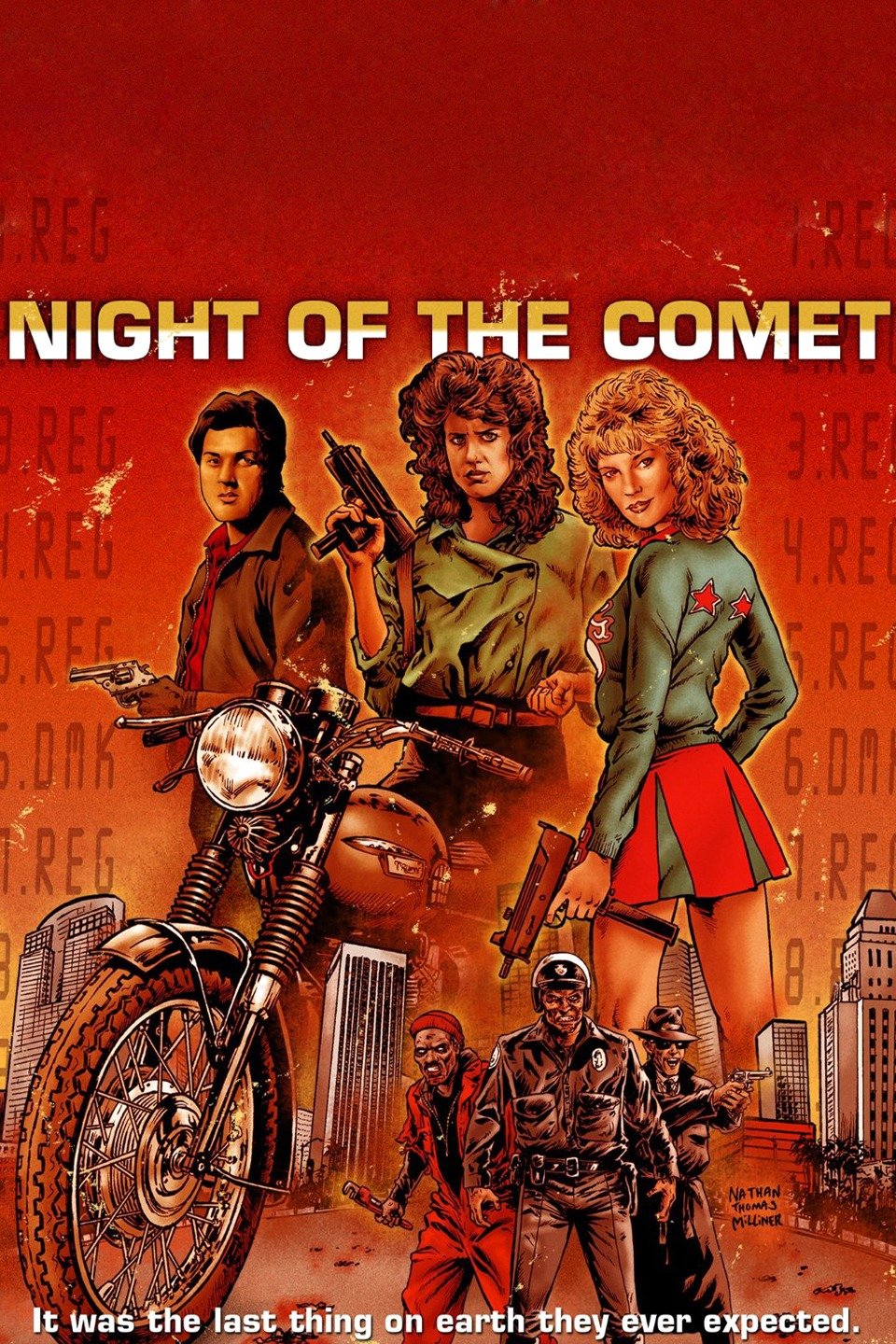 This is a movie that’s definitely real crazy but in a good way. It manages to be a horror film that really stands out because it’s got a lot of humor and isn’t afraid to throw in a bunch of genres. You’ve got a government conspiracy going on here along with zombies and an apocalyptic setting. You can’t really go wrong with this or rather, it’s possible but the film executes it pretty well. It’s got some issues but you’ll have a good time here.

The film starts by introducing us to the protagonist Reggie. She’s really into arcade games and has even got all of the top scores at the local arcade. This causes her to disregard her actual work duties at times though. Well, one day when she leave work she sees that everyone is gone. It turns out that the comet which had been passing by somehow vaporized everyone who was outside. The ones who didn’t die instantly have been turned into the undead. Anyone who has been contaminated will slowly succumb and fade to dust or become a zombie. Reggie needs to find a way for her and her sister Sam to survive but what can they possibly do?

So this is part comedy as I mentioned and because of that the film doesn’t take this premise seriously at times. This allows the film to go all in with the music. Usually you’d expect a lot of tense tunes and such but instead we’ve got some loud rock and roll type music playing throughout the entirety of the film. It’s great! I can only imagine how much fun it would be in theaters to have that music playing the whole time. It gives the movie a lot of energy that it wouldn’t otherwise have and it’s also just fun.

Another good scene was the main two girls deciding to go to the mall to have a good time. After all, if everyone’s already dead there’s not much you can do about that so why not have a good time right? Of course it would figure that people have gone crazy and they were hanging around the mall just to cause trouble. This felt like the most random part but it also seems to just be a common thing where there are always a lot of crazy people just looking to make a bad situation even worse.

These guys clearly have no endgame strategy, they’re just here to mess around and go crazy. It was nice to have a prolonged gun fight scene though. I can’t say that I was really expecting that and the movie really would just move from one thing to the next. We get a big climax involving breaking into a government base and taking names. That was definitely an intense sequence and I also just liked that the government was getting involved at all. That was nice to see and while I should use the term loosely, most of the world is gone so they may as well count.

We don’t know exactly how many survivors there are but I’d wager a few million or so. If you were inside, underground, or properly insulated then you’ll likely have tanked the rays. So just like the main characters were still good, then it stands to reason that there are probably a lot of other people who are okay as well. While the doctors had their own theories on this, it also feels like some people are just naturally immune so if you grab that subset then you’ll just have a ton of people running around. I don’t think the Earth is effectively over the way it seems to be in most disaster films like this.

One weakness for the film is the romance though. This is about as weak as you get with Reggie being with one guy at the opening of the movie but after he is eaten then she rebounds with Hector when he shows up. Keep in mind that it hasn’t been a long time as of yet so this rebound was way too fast. There’s no way to buy into the romance when it’s like this and naturally Doris tries to get a romance of her own but it’s so fast that she just seems desperate. You don’t need romance in a disaster film so that could have just been sidelined if you ask me.

Beyond that, Reggie is a good character here though. I like the fact that she knows self defense and was able to take out the first zombie when he attacked. She did have a bad tendency of letting her guard down though as there were two times where she knocked the zombie over but then allowed it to get up and grab her from behind. IF you’re fighting a zombie, don’t take your eyes off of him! That’s got to be the big moral there because it was nearly curtains for her even though she had the lead for so long. You can’t let the enemy turn the tables on you like that.

Sam is a bit slower on the uptake and isn’t as prepared to fight as Reggie but she does well in keeping the atmosphere light and morale high. She does have a bit of a subplot where she’s jealous of Reggie but ultimately gets over it. The two do get along even though they have their differences and made for a good main duo. Hector was also a good guy. He had a gun right away so he was ready for action and I thought that he had a good head on his shoulders. He didn’t forget about the main characters when he went on his journey and he’s just a likable guy.

Most of the humans are knocked out of the running early on but I do think the film had a little fun with Doris’ character. She’s the mother of the main duo and is shown to be as unlikable as possible even landing a solid punch against Sam. She doesn’t have any strong moral values and is ready to cheat at any given time so…yeah that’s her character in a nutshell.

Finally there is Audrey who seems to be the only government agent with a soul. Everyone there is willing to do insane experiments and whatever they need for more data while she still has a little humanity and empathy left within her. She takes risks, has a lot of attitude, and can fight. Those are all traits that you want to see in a quality character so she fits the bill. It was always fun to see her on screen although her role isn’t huge. The whole government component isn’t important until the end but the climax definitely delivers. Even genius scientists can get overconfident.

Overall. Night of the Comet was better than I thought it would be. I’m not sure exactly what I was expecting from this one, but definitely more of a traditional survival film. The comedic elements here are what puts the film up a notch because it can have fun with the premise and also let the main characters fight a bit more. They know how to use a gun and are even familiar with the model numbers. It’s clear that they aren’t like your average main characters and that’s a good thing. I like the heroes to be ready like this and so I would recommend this film if you’re looking for a fun sci-fi flick.