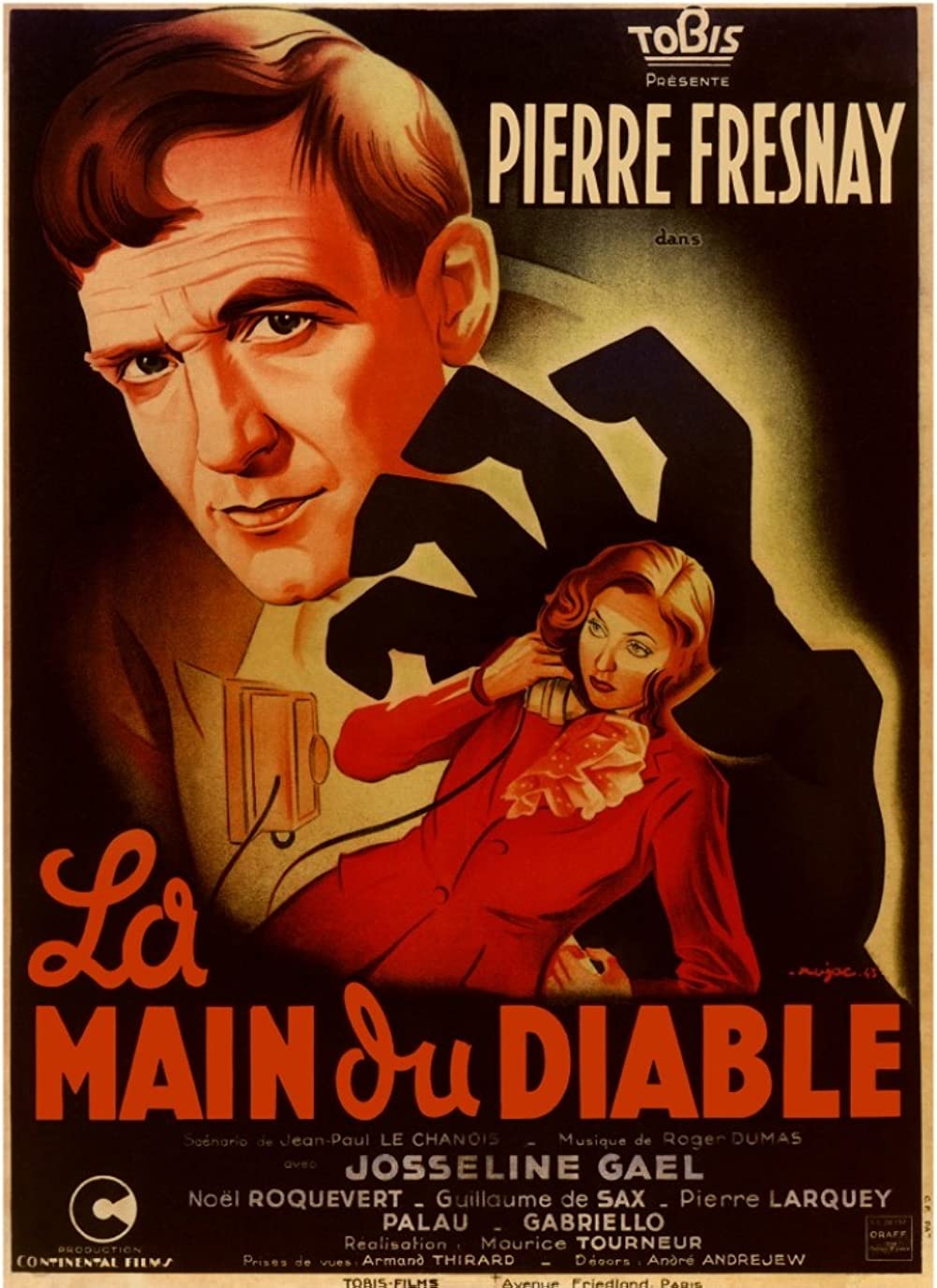 This film has the original French title La Main du Diable and a more directly translated title but since this seems to be the main English title it’s known as, I figured I’d role with it. I haven’t seen too many French films but the ones that I’ve seen usually have very intriguing premises. This one is no exception as it’s effectively a take on Pandora’s Box and how greed will doom you right from the jump.

The movie starts with everyone enjoying a nice dinner at a hotel until they hear some shooting outside. Shortly afterwards a mysterious guy named Roland shows up and he’s missing an arm. The guy is rather defensive about it as well and he’s carrying a box. The guests all wonder what’s in it but don’t want to mess this guy and go about their business. A few cops even show up asking about a man in black before rushing off. Roland doesn’t seem to be the one they’re looking for but the whole thing is suspicious. Just then, darkness enshrouds the room and when it lifts, the box is gone and a few guests were attacked. They remand answers from Roland and he decides to tell them a very grant story.

See, Roland was a painter who wasn’t very talented at his craft. Despite this, he had a lot of confidence, so much so that he asked out a girl named Irene. Unfortunately she wasn’t thrilled with his paintings either and began to ridicule him quite cruelly. Roland was depressed but then the chef Melisse said that Roland could buy his magic box for a single penny. It would grant him all the skills he could ever need and make Roland a living legend. The whole deal was fishy and inside of the box was a moving hand but Roland was desperate and made the deal. Unfortunately it’s like a chain letter or a pyramid scheme and Roland was the last one.

He does get the talents and skills so that wasn’t false but he has to give the Devil his soul. The only way around that is to pay him the money back but it doubles each and every day. The Devil is also fully willing and able to cheat at this game in order to make things tougher for Roland. You can bet that this won’t be easy and Roland must hurry or all is lost. The plot itself is so unique that it takes a few paragraphs to really get it out there.

We can blame all of this on Roland though. He absolutely was aware of the main stakes in how fishy this was when he saw the moving hand. Also, why would this guy be so willing to sell the magic box for a penny if it was so good? It’s all so obvious and yet Roland still tries to go for this. It’s one of the biggest sucker moves that I’ve seen in a long while. You even have a guy named Angel telling Roland not to buy the box because it’s cursed but he doesn’t listen.

Roland makes a lot of bad choices throughout the film though like when he keeps going after Irene. She made it perfectly clear that she didn’t like him throughout the constant insults and was through with him. She only changes her mind after the box because now Roland is skilled and making a lot of money. Now that we’ve established that she’s only here for the money, you’d think that Roland would realize this but that doesn’t happen. He’s just so happy that she’s with him that he overlooks all of this. Then as the stress continues to grow he realizes that he made the wrong call but it’s way too late for that.

He lets his emotions run wild with him all the time and comes across as way too desperate. If he wants to be a great artist that’s fine but then he should not want to take any shortcuts. Where is the satisfaction if you are getting all of your skills from a box? It’s clearly not his own abilities so that should take away from the happiness. The worst part is that Roland has several opportunities to give the box back, the devil even gives him one chance to mess with the guy but of course Roland makes the wrong move either way.

The movie could not have made it any more obvious to Roland through a variety of characters that he was on the wrong path but he persisted anyway. This guy was extremely annoying the whole time. Then you have Irene who is definitely as mean as can be. I still found her less annoying than Roland though because he should have been the one to get out of there instead of just taking it the whole time. He was courting misfortune the whole way.

Likewise, Melisse was crooked in passing the buck onto Roland but Roland should not have fallen for it. Melisse just wanted to save his own skin at that point and he certainly succeeded. If you think about it, almost everyone is an antagonist here. Then you have the Devil who is obviously the biggest villain around. He is all about manipulation, the whole thing is just a game to him. Of course there is no way to beat him flat out as he has all kinds of powers while these characters are only human. The best way to win the game is not to play at all which is a lesson that Roland could have used. The Devil gets quite a bit of screen time as he mocks the lead and messes around a lot. I thought he made for a very intense villain.

The writing is on point and the pacing for the movie is good as it all goes by rather quickly. The only weak part here would be the romance and of course as a result, the main character as well. I also did miss the present time a bit. I know ultimately that was just a way to set up the flashback but the whole time I was ready to see what they’d think about all of this and how it would go. Unfortunately, by the time the movie goes back to the present it is almost over so there isn’t a lot of time for them. That’s why most of the film is set in the past which makes sense but another 15 minutes or so would have been really good.

Overall, Carnival of Sinners is a rather intense film. It’s mainly scary in the sense that the main character has to slowly come to the realization that he is doomed. He bit off more than he can chew. There aren’t big jump scares here or anything like that. The Devil is not fighting him mano a mano or summoning giant monsters. He’s winning with superior financial resources and a debt that keeps on growing. It’s a very unique way of putting despair in Roland’s heart. I’d recommend this film so long as you don’t mind watching a film with subtitles. (Unless you know French of course!)