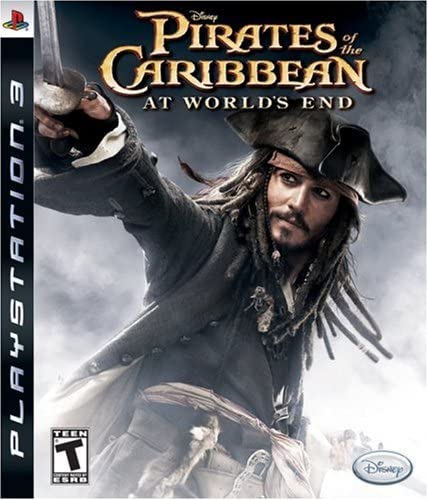 It’s time to check out Pirates of the Caribbean! This one sat on my backlog for ages because I technically already played the PSP version a while back so I didn’t want to effectively replay the whole game too soon. This way I gave it enough time where it pretty much felt like a brand new experience. It’s a fairly solid cash-in. It suffers from some of the issues you’d expect like some of the mechanics not being thought through all the way but on the whole I would say that the game is fairly fun. The length is decent for this kind of game and since you can probably get it for just a few bucks, it’s not a bad deal.

The game’s main plot deals with Jack being in trouble once again but after being betrayed by a close ally he is actually destroyed this time. He is now in Davy Jones’ locker which is sort of like another dimension. The land of the dead is like an endless desert and so the characters decide to quickly go back and save him. They’ll need to save his life once and for all before finally taking down the heart of Davy Jones. Can they really handle this kind of pressure against such a dangerous opponent?

So the gameplay is your average 3D platformer. You run and jump across levels while occasionally using the action item to operate levels and such. The levels mainly feature a lot of combat as you take out scores of minions that try to get in your way. Most of them you can beat in a single combo so for the ones that you cannot, you must beat them with one of your super attacks. Otherwise they will continue to get up endlessly while also summoning an army of the undead along with them. You’ll want to always target the super fighters right away because otherwise the fights really are endless.

Since there is no EXP system here there isn’t a value in fighting against those extra enemies so you’ll definitely want to keep it moving. You can even try to skip enemies when the level is in a platforming section but at least beating those is very quick so that shouldn’t be a big issue. The best attack to use is two sword strikes, one punch, and then a sword strike. This 4 hit combo will defeat any enemy so it’s really good to memorize it. As you can probably guess, the combat itself will be very repetitive in the end as a result since that’s what you will be using in each level over and over again.

There are 11 levels in the game and each one is around 15-20 minutes long. After that there is no replay value though because there is no level select or anything like that. It’s too bad since there are secret collectibles and treasures in each level but you’ll need to play with a guidebook because otherwise just missing one would mean that you have to play the whole game over again. There aren’t any trophies to try and earn either so you don’t really need to worry about that.

The soundtrack has all of the usual Pirates themes within it so they can be catchy enough. The game does a good job with the constant cinematics as well. If you haven’t seen the movie there are a few parts that will likely confuse you as the game will randomly skip some things but otherwise has a good amount of detail. In that sense I thought it had a bit more of a budget than the average movie-tie in. Perhaps not by a lot but I’ll take what I can get.

I enjoyed the combat quite a bit during the levels and the platforming wasn’t bad. Pro tip, make sure you turn off motion controls. There was one level where I was stuck for ages before finally turning that off in the settings and then everything was real smooth. Motion controls are almost definitely not worth it and this is a classic example of that. You have to balance on beams and such so with motion controls it was a bit too delicate. There is one big gameplay weakness either way though.

The boss fights! So the way these work is a bit different. You’re playing a reaction game where the opponent hits high, medium, or low. You have to quickly swing the joystick in the direction he does to counter it but the timing is incredibly precise. Often times you will feel like you made the move in time but it just didn’t work. This happens again and again and when you lose you have to usually watch a quick unskippable animation. I died many times to one of the boss fights and had to watch the death scene countless times.

I do like that the game always respawns you close by but the boss fights didn’t feel well designed. The reaction windows are way too small and when you’re attacking it all seems very chance based. Sometimes you can land a lot of normal attacks without waiting for supers and other times the computer will block every strike. The boss fights just aren’t fun and are the only thing that really felt like there wasn’t enough time put into it. If the boss fights had been just like the normal fights then I dare say this would have been a blast. It’s just a shame that this was not the outcome.

Be that as it may, the boss fights are a small part of the overall experience so as long as you have fun with the other gameplay styles then you’ll have a good time with this one. It definitely adds a bit of a difficulty spike to what’s otherwise a very easy game. For the most part you’ll be breezing through everything so this will at least prevent you from beating the game too quickly. Just in a very artificial way.

Overall, At World’s End definitely plays better on the PS3 than the PSP. I feel like there were also a lot more cutscenes and depth here so it really is the definitive version. If you’re going to get this game, make sure you get it on the home console. It’s so cheap that it’s worth a purchase and you should walk away fairly satisfied. I’m not the biggest fan of the pirates series but in a video game any franchise can shine so long as the gameplay is on point. I suppose we’ll see if there is ever another console pirates game in the future.