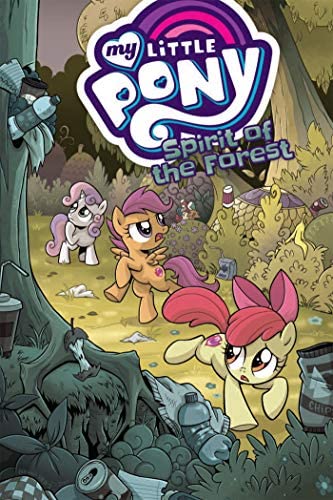 It’s sure been a while since I read my last My Little Pony adventure so it’s good to be back in the mix. This is a fairly low stakes adventure starring the Cutie Mark Crusaders but it hit all the right beats that made the series big in the first place. It has good writing with likable characters and a satisfying conclusion to the adventure. The issues go by very quickly and you’ll have a good time reading the stories so you really can’t go wrong here. Just like the trio would low key have some of the more enjoyable adventures in the show, that ends up being the case here as well.

The Cutie Mark Crusaders are having a good time as usual when they notice that there has been a big increase in the amount of junk, trash, and litter that has accumulated in the forest. They start cleaning it up but every day it appears again so they have a stake out. Well, it turns out that this is all caused by Filthy Rich’s workers as they are doing a big project in the forest which is cutting down a ton of trees. The trio try talking him out of it but Filthy Rich explains that his hands are tied because he needs money and the Ponies need goods so it all works out. Even the Mane 6 say they are powerless against the world of big business so the Cutie Mark Crusaders have an idea. They will create a ghost Scooby Doo style and scare everyone off of the property. If they can succeed then the forest will be saved. The means may be less than legal but these are desperate times.

If you really think about it, the trio are basically playing the role of your average Scooby Doo villain which is a nice change of pace. I’ll give them props for trying to change things the legal way first but they just couldn’t make a strong enough case to make that work out. It doesn’t help that even popular opinion is against them as people like the forest but they prefer having their furniture and other perks of the trees being cut down. Even the Mane 6 felt a little halfhearted with their assistance.

You can’t say that the CMC don’t try hard here. Ultimately they are able to get pretty far in their tricks and only run into trouble when the Mane 6 get involved. So this was another part I enjoyed a lot because it’s like we got to see an episode from a different POV. Off screen Filthy Rich asked them for help in stopping the monster and of course they said yes. It makes sense that they would help and as good as the CMC are, the Mane 6 are naturally more experienced. Their winning the fight made complete sense and it was a satisfying conclusion.

Another check in the comic’s favor is that the problem was rather nuanced without making Filthy Rich extremely evil as the average cartoon would do it. For example, he is certainly the antagonist but he’s not laughing as he breaks down trees or acts disrespectful to the ponies the whole time. No, he treats them as mature ponies and explains his position. It’s not even an awful position because he explains that he did get permission from the village, signed the right papers, and got to work on giving everyone what they wanted. Yes, the Forest would be removed but he didn’t just start chopping, he had a complete plan first which everyone signed off on. He didn’t cut any corners or break the rules in any way.

In fact when the heroes mentioned the litter to him, he had it solved that very day. He went up to the workers and told them to stop which worked. I enjoyed Filthy Rich here as a result. He just seemed way more reasonable than your average rich villain would be in this circumstance. That only becomes even more true in the climax when more characters including his daughter Diamond Tiara talk to him. Ultimately he sacrifices a little wealth in order to make everyone happy and that was a big move on his part. Definitely a fun character to have around.

Diamond Tiara also looked good here. She has come a long way from being the bully like back in the old seasons where she would just show up to mess with the heroes. Now she is actually helping out and trying to make a difference in her community. Bravo to her I say, that’s definitely not easy. I would even say she ended up outshining the main trio here. It may be a bold take but she was able to make a difference without skulking in the night or using any dirty tricks. Of course she has a connection that the main 3 did not since she is related to Filthy Rich but she merely used all of the tools at her disposal in order to save the day. That’s all you can do at the end of the day righgt?

The main trio were fun as always though. They’re always very lively and have a lot of great plans. The plans may not always work out but they don’t give up and that’s the most important thing. Hopefully they get some more adventures in the future as well and having another battle with the Mane 6 could definitely be fun as well. The Mane 6 may have won this time but who’s to say it would go the same way in the next round?

The art here is really solid and colorful which also makes blasting through the comic easy. It’s easy to see what is happening at all times and the character models are on point. On a technical level there is definitely no issues with the comic and I already mentioned how good the writing is. It’s a story aimed younger but written so that grown ups can enjoy it as well with how rational everyone is and it really works out well.

Overall, I would recommend checking this comic out. It’s a lot of fun and has something for everyone. If you want a fun adventure with good characters then you have come to the right place. It sets a high bar for the rest of the My Little Pony comics that’s for sure. I’ll have a review for another one up fairly soon but I can unfortunately say that it doesn’t quite match up to this one. The bar really was set too high this time and that’s just the risk of being super solid.