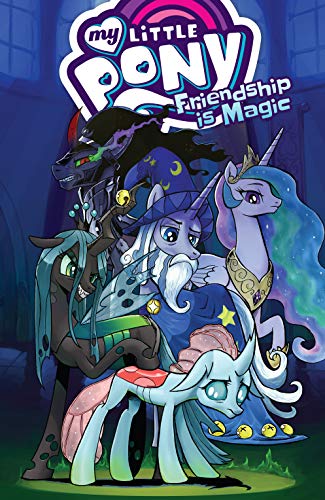 The next My Little Pony volume is here now so it’s time for more fun stories. As I suspected last time when Applejack didn’t get a story, she gets one right away here so the balance is really on point. It’s another fun assortment of stories that all flow by very quickly. As always the series succeeds giving you a happy feeling about the whole thing after you finish the story and succeeds in what it has set out to do.

Apple Bloom is one of those ponies who is confident that she isn’t scared of anything but this is put to the test when she is trapped in a web by some kind of jumbo spider. This also happens to Applejack but Bloom is just small enough where she should be able to escape. Unfortunately the only way to do this is to relax and not be so tense so you slide off of the webs. Bloom is too scared and won’t admit that she is scared so Applejack decides to to tell her a story from back in the day. She’ll need to tell the story quickly though.

It’s a good issue and Applejack is good at getting ponies to face their fears. Her honest approach is the right match for this problem. Her story of being scared of the water is also intense and it’s easy to see how that could have happened since her falling into a well was really traumatic. Big Mac got to look good here as he looked out for Applejack just like how she looked out for Apple Bloom. What goes around comes around and it’s just a nice dynamic. Scaring off the spider at the end may have been a bit cheesy but on the whole I was satisfied with how things turned out. The moral was good.

Another story focuses on the next generation as the changeling student really wants to do well on the final exam. Twilight Sparkle wanted to make things easy on her students so she said that they could do whatever they wanted as long as their project showed off what they learned about friendship. Most of the students figured they would do something easy like just talking for a few minutes while showing off a rock or something but she wants to do something more drastic. She’ll use her transformation skills to appear as over 300 characters in the span of 10 minutes to relive the history of Equestria. It’s an ambitious project, too ambitious you might say. It’s just not possible to pull off that many transformations in such a short period of time.

She’s not too nice about this either but fortunately the rest of the students and Twilight Sparkle get her back in line. It’s a fun story but I always prefer for the Mane 6 to be the main characters instead of supporting. It just feels more exciting that way. If you need variety then this is probably the smoothest way to do it though. Of course the occasional story about the villains is definitely another way to do it too.

Then we have a story about Pinkie Pie and her sister Maud. Basically it is time for a huge party and this should be easy since that’s Pinkie Pie’s thing but she is stuck baking a cake for another party. So Maud has to help another pony set up the party in her stead but this is well outside of her comfort zone. Can she really pull this off or is she merely setting herself up for failure? This is a story about doing the right thing even when it’s hard and it’s a solid story.

Maud tries her best right from the start and really does a great job with the preparation. She even has a little sugar to boost up her stats and liveliness which is really going the extra mile here. It’s easy to be proud of her here and what she has accomplished. There aren’t a ton of characters who would have been able to pull this off. At the end of the day Pinkie Pie did her best to help out as well and even out ran the train which was impressive. Maud is good as a change of pace pony as I don’t think she would be able to hold her own stories too often as her humor style may quickly become too one note but stepping in like this it works out pretty well.

Finally we also have the two part adventure with the big race. Rainbow Dash is ready to test her mettle as this is the toughest race in all of Equestria but then some guy shows up who is being really passive aggressive to Big Mac. It turns out that Big Mac used to be an expert racer but he was too good. His old friend got jealous and ran off so Big Mac decided never to race again. As you can probably guess I blame the friend 100% for this. He is the one who wanted Big Mac to race and then got heavily salted once Big Mac was winning? Yeah I should just call him the “Friend” for now since that’s not how a real friend acts.

So the story is divided into the flashback of the original race and the current one as the contestants all get set. There is also a subplot about a group of thieves who are on the run from some dragons and have accidentally put the stolen item in Rainbow Dash’s car. The subplot felt a little random and dare I say unnecessary but I still enjoyed the race. There’s a lot of action to enjoy here and who doesn’t like a good competition right? It’s always great to see Rainbow Dash taking charge and just getting out there. With her speed this should be beyond easy after all but to keep things fair she seems to be holding back. The competition episodes in the show tended to be some of the stronger ones as well so I wasn’t surprised that it was really good in the comic as well.

The art is pretty solid here as you would expect. The colors are nice and vibrant and there is a large cast here but they all stand out. It’s been pretty consistent throughout the series which is always nice to see and it makes reading the comics nice and easy. Mix that in with the good writing and you’ve got a solid foundation for the series. It’s easy to see how it’s lasted 19 volumes.

Overall, This was another good MLP volume. We got a nice assortment of stories here and I wouldn’t say any of them were weak. The racing one was probably the best although I was hoping that Rainbow Dash could pull out the victory. The way I see it she earned it for sticking up for Big Mac and setting the stage. At least she was a good sport about the whole thing though and didn’t let it drag her down. If you’re a fan of the series or just want some wholesome comics then this is a good collection to pick up.