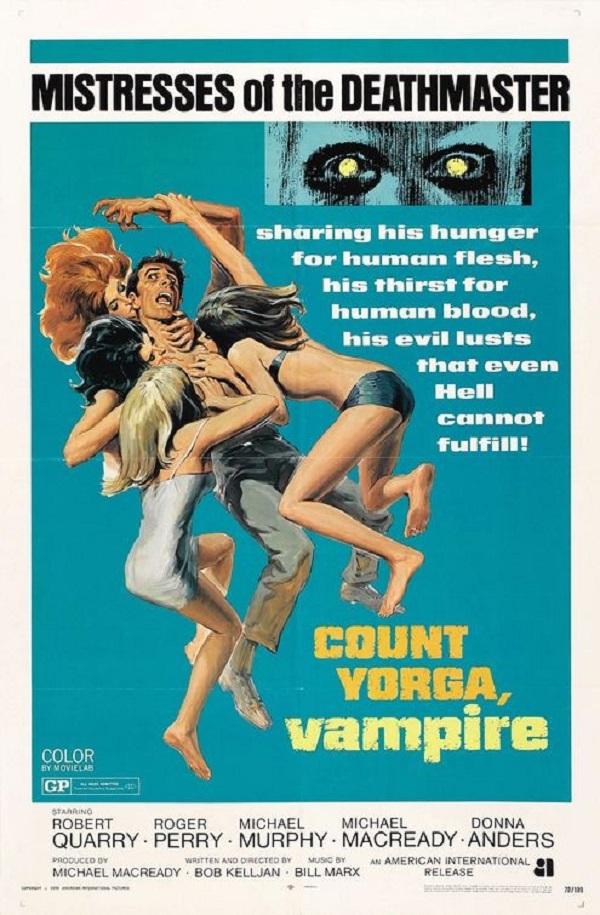 Now this is an awful film so prepare yourself. Dracula already set the bar extremely low with all of those installments but somehow Yorga is even worse. The film’s extremely annoying with characters not making the right moves and it goes for being gritty for no reason. They definitely want to show that Yorga is as demented as possible but he’s the Count so we already knew that.

The movie starts with the main characters doing a seance so that Donna can see her mother again but unfortunately the whole thing doesn’t go well. It just gives Count Yorga a chance to mind control Donna a bit. He scurries off but later on Erica and Paul end up driving the guy home which is a big mistake. Now the Count has them in his sites and things get tricky from there. Will the count be taking everyone down or can Dr. Hayes be brought in to stop this?

So where to even start with this one? We’ve got the usual blood sucking everywhere but that is really the least of our worries at this point. Where the film really surpasses its limits here is it decides to also give the Count a sidekick. This guy is basically desperate to have a lady of his own and so he ends up attacking one of Yorga’s mind controlled victims. This is the scene that absolutely should have been cut out of the film. It’s off screen but he basically has his way with her.

It’s purely here for grit and shock value because it has nothing to do with anything. This guy has no business being in the film in general. We’re here for the vampire, not the right hand man who is messing around here. The film was basically doomed to be a 0 from this point although that was rarely in doubt.

Yorga is also shown to be one of the more perverted villains as the guy has fun commanding the victims to mess around with each other while he watches. You wouldn’t see this kind of behavior from Dracula who at least kept some dignity most of the time. This guy also can’t handle himself in a straight fight. Half the time he has the mind controlled zombie vampires go in to fight for him. Near the end Yorga is confronted so he immediately runs off.

Then he has the element of surprise along with his supposedly superior vampire physical abilities and yet he gets rocked. The guy has no defense to the stake but he also doesn’t have the speed to dodge or the strength to mess with the aim? He just looks so weak by the end that it takes away from his tough talk the whole film.

I’ll just give him one thing, I liked his banter with Dr. Hayes. It’s the only good part of the film as they both subtly threaten each other. Hayes hints that he knows Yorga is a vampire while Yorga advises him to leave while he still can. I like these threatening conversations like this. It keeps things interesting and you keep wondering which character will back down first.

That is the only good part of the film though as the rest goes back to the film just being awful again. Why do the heroes decide to attack only once it’s night time? I suppose they still thought there was hope to save some of the captives but they really took forever and should have attacked at the crack of dawn when they had to leave early. That would have definitely been their best play here and it would have taken Yorga by surprise. Once it was night time the deck was stacked against them.

Another issue with the film is that none of the characters are particularly likable. Donna doing that seance didn’t help matters and everyone was rather rude about it the whole time. Just don’t participate in it at that point. Paul and Erica were messing around too much in the van and didn’t keep their guards up.

The only good character here was Hayes and unfortunately things don’t go very well for him there. He definitely should have prepared himself a bit more but at least he did last for most of the film so I’ll give him some props there. It’s not like he had a whole lot of help in the film anyway.

Michael was the only other one to fight and unfortunately he lets his guard down a lot too and was too slow to help in the end. We do get the classic jump scare at the end of the movie though. It may not be the most impressive one but it gets the job done. You’d expect nothing less here.

It’s hard to make a vampire film that’s all that good but you could absolutely do one that’s way better than this. Make the Count someone who needs to drink blood to survive so you keep his cocky attitude and have him take everyone out but he just destroys them instead of keeping them alive to play with. Remove his right hand man and make the main characters a little more likable. Have them be more focused on trying to figure out what the Count’s deal is and cut out the half hearted romances squeezed in for no reason. Then without all of the shock value scenes perhaps this could actually be a decent movie…perhaps.

Overall, Count Yorga is a huge miss. It’ll end up sinking the vampire genre to new lows for you so I’d advise you to just skip this one entirely. There’s no reason to check it out at all so instead watch a Dracula film if you have to but of course I would advise just completely not watching a vampire film as it is. It’s just very rare that they end up being good anyway so why bother right? I doubt anyone will remember Yorga in a few years though. The guy is already over the hill.