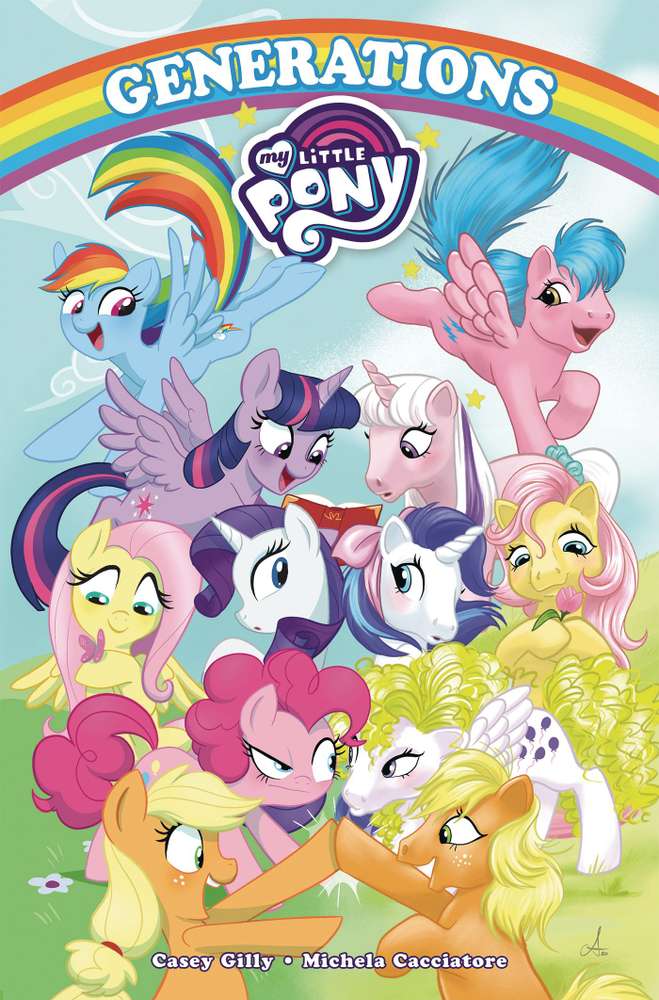 Generations seems like a title that just works well for crossovers. It makes sense because it really signifies how different eras are coming together. Unfortunately this one isn’t very good and is the weakest MLP comic that I’ve read. It’s not bad but it shortchanges you on the actual crossover aspect which is a shame. The highlight of the comic is when Twilight admits that Starlight Glimmer is still more powerful than she is and that was a nice throwback to how Starlight is supposed to have the most powerful magic in the verse outside of maybe Tyrek. There isn’t a lot of action here though so it’s more about the adventure the whole time.

Grackle and Dyre are bored eating popcorn and hanging out at the Witch cave one day when they decide to attack the Ponies. They want to impress their family by doing this so they quickly send 3 evil “Ponies” over to make a mess of things. It’s good timing for them as Starlight Glimmer and the school are completely overrun by the students so they’ll take anybody. Starlight welcomes these 3 in as teachers but things start to get a little iffy when she notices that they are teaching ponies the wrong things. Their curriculum is basically anti friendship but Starlight isn’t sure how to fire them without making the ponies feel bad. Something’s not right and if the heroes don’t find the answer soon then they will be doomed!

The OG Ponies don’t show up until around issue 4 to help out. Most of this story is really about the evil ponies causing a mess of the school and really messing with the friendship students. At least this might help Starlight realize that even the current teachers weren’t doing great if the students could be led astray so easily. You’d expect them not to buy into the fake lessons but they do so right away. The Mane 6 not ending this threat in an instant because they are all busy is a reasonable way to keep the story going.

So this all sounds rather decent, why is it not getting a super high score? Well the main issue are Grackle and Dyre. They’re easily some of the worst villains in all of MLP. I dare say they are the worst but in case I’m missing someone I figure I’ll just say one of the worst. Every scene with them in it is dreadful. They’re super lazy and not even remotely a threat so they aren’t interesting. I think you could properly have some humans in an MLP adventure but you have to do something to really justify their existence. Just having them hang out and complain the whole time gets repetitive very quickly. They finally jump into the action themselves near the end but even then they don’t do a whole lot. They just hold the story back.

The evil ponies are okay I suppose. Violet Shiver, Shadow Storm, and Black Belle are the 3 evil ponies but they start to have second thoughts about the mission. After all the ponies are so nice to them and all. It may feel a bit odd to see them change their tune so quickly but you could say it’s because the spellcasters weren’t that strong so they didn’t properly create “Evil” ponies and just made Mean” ponies instead. As a result they strayed from the path. Focusing on just one of them would have probably been a lot more effective than having all 3 of them if you ask me.

There just aren’t a lot of interesting things occurring here. The plot itself isn’t super engaging since it focuses a bit too much on the students and the Mane 6 are missing out. I always like seeing Starlight but she isn’t really able to get involved much here either since she’s busy as principal. It’s just a very odd decision to have the story structured in this way. But you would immediately make the comic many times better if you just cut the two witches out of this. Remove them from the comic and substitute with any other villain and this would be an improvement.

The artwork is decent. At times there can be a lot of text that takes over the screen like when the two witches are talking but when it’s just the Ponies it works well enough. I wouldn’t say it looks nearly as good as the main series though. That one definitely got a much higher budget and of course the writing is also a lot more impressive there. On a technical level the comic isn’t bad though, it just doesn’t really pop out at you. There is something surreal about seeing the old Ponies together with the modern ones though.

Overall, My Little Pony: Generations isn’t quite able to match the hype of the concept. Its biggest issue at the end of the day is just that it can be a bit boring at times and that should never be happening in any kind of crossover. It should have been really great with all of the ponies getting together and teaming up but the originals don’t do much at all. They help with a cure for the evil energies and flowers that the villains plant but that’s about it and you could have easily done that without them. That’s a big reason on why they don’t stand out. It’s because they are very nearly filler in their own crossover and that’s always a bad thing. A crossover should maximize the talents of all characters involved. Still if you like the franchise a lot then it’s still worth checking out but you will likely be disappointed based on the premise.