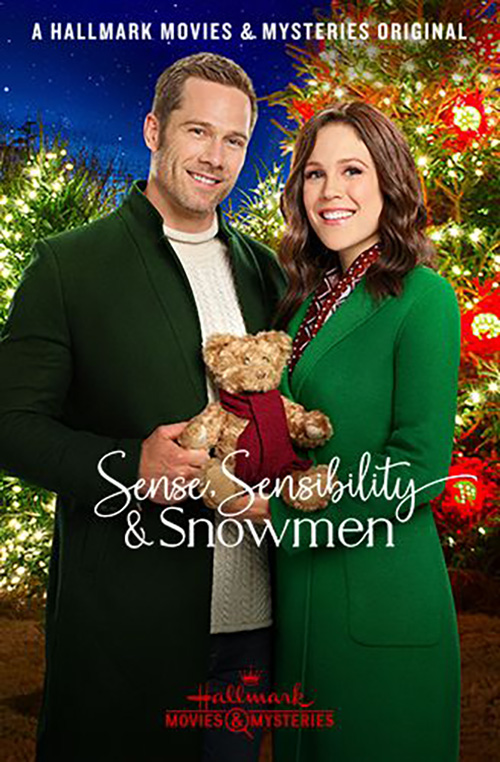 It’s time for the next Hallmark movie installment! As always it’s a solid experience all around and Hallmark is quite consistent with that. I did have some issues with the film relative to the others so this would not be one of the strongest ones but at the end of the day when your writing is on point and the film has good pacing, any issues tend to be quite minor ones.

The movie starts off with Ella messing up on another big Christmas decoration party by not following through and making sure that the musicians were set. Her sister Marianne is frustrated because apparently this happens a whole lot. They are co partners in their decorating firm but Marianne has really been doing all of the work. Ella is determined to make it up to her by nailing a big party this time on her own. She happens to overhear a CEO named Edward talking about a party and volunteers her company to complete it. Edward very reluctantly agrees and now it’s up to her to make this a success but is she really up for it?

On Edward’s side, he is the CEO of a really big toy company but ever since he took over the reigns from his father, it has not been going super smoothly. For some reason he just doesn’t seem to have as much of a knack for it and he’s confused since he is going through the data. He has to land this one big account or the company is finished and in the spur of the moment announces that the company will have a big party. Of course that isn’t true but he has to change that and this is where Ella comes in. So now they must hurry to make this deception work out.

I just saw a Hallmark film about lying to the boss so this plot happening again so soon is quite the coincidence. The main characters need to learn not to just lie to the boss when they get stressed out. Trust me on this when I say that it is absolutely not a good idea and will just get you into trouble every time. As for Edward not doing very well as the boss, it definitely makes sense from what we see. He’s been completely lost in his spreadsheets to the point where he cancelled the teddy bear that the company was known for. He said it was not selling well but the problem is that the company’s very identity revolved around the bear.

The company’s whole origin was based around it so getting rid of the bear was absolutely crazy. He seemed a bit short sighted with that decision and early on he is even debating making a toy worse to save some money. You do have to make some tough calls when balancing the checkbook and all the right funds but this was not the right way to do it. Not saying you have to get super emotional but he really wasn’t seeing things through. Even the scene where he nearly tells Ella he’s not interested in her doing the party was not a good move since he had no backup options at the time. This was a moment where he let his emotions get the best of him.

In general you know that he needs to improve a lot. I also thought his mild outburst at the father during their Christmas meal was a bit uncalled for. He did want to set straight that he would be leading in his own way…but in every scene we saw it would usually be Edward trying to impress him or running some numbers by him. I felt like his dad was always eager to help and offered advice (Which was usually very sound advice) when he was around but I didn’t get the vibe that he was super overbearing the whole time. So it felt a bit dramatic when I think his father would have understood right away either way.

As a final note, I also thought Edward badmouthing Ella’s group was a bad look near the end. Of course he has a reason for it but it was very presumptuous. You would want to let Ella make the call at the end of the day and you could let her know why you think it’s not a good idea. But the way he handled that was quite poor so I could see why Ella got upset. Ella jumped the gun quite a lot near the climax so I don’t fully agree with her but that scene was a really bad look. I’ve been taking lots of shot at Edward but at the end of the day he’s still a good guy. His voice is super deep which makes all of his scenes rather entertaining but he also goes out of his way to help Ella out with her future plans and you could say this was before he got super interested in her.

He handled the decorating situation well once he was pressed into it so he still had his good moments. As always I do feel like the romance was a little rushed though. You definitely don’t want to go after your head of party planning when you’re already so busy with the big party coming up. Going for a quick fling during the holidays seems like a recipe for disaster and you need a lot more time to have a quality romance going. That’ll always be a bit of a weak link in these films because there just isn’t enough time to properly develop a romance.

The film even tries to balance a second one here with Ella’s sister Marianne and Edward’s cousin Brandon. I didn’t think this one really needed to be here but at the same time I preferred both characters to their main counterparts. This is a case where the side characters were just really solid. Brandon was always ready to help out and didn’t jump to conclusions. If not for him the whole movie wouldn’t have even started. Meanwhile you totally get why Marianne gets upset in each instance since it’s not like Ella let her down once, but apparently it’s been a whole pattern of incidents. So you’re not so quick to forget when it happens over and over again.

Perhaps it got a little too serious by the end with them not talking to each other for a bit but you know eventually they’d get along again. As for Ella, she’s a good heroine but the party business may not be for her. She has a lot of fun in the moment but because of that she will do things on a whim rather than planning things out. It may have worked out here but that doesn’t mean it always will. It feels like a much more dangerous strategy than the structured way that Marianne has things. Of course with Edward being a very methodical person that should help them find a good middle ground.

Overall, The movie may not have always handled the drama aspects super well at times which is what made this one a bit weaker in some way but at the end of the day it still gets all of the fundamentals right. There are fun Christmas songs here and great scenery throughout the movie. It’s always got a fun vibe and a good amount of replay value because it’s just a nice film to watch on Christmas. Some scenes may make you wince just a little bit with the romance but you’re still in for a good time. I’d recommend this to anyone looking for a fun Christmas title. It’s just solid fun.