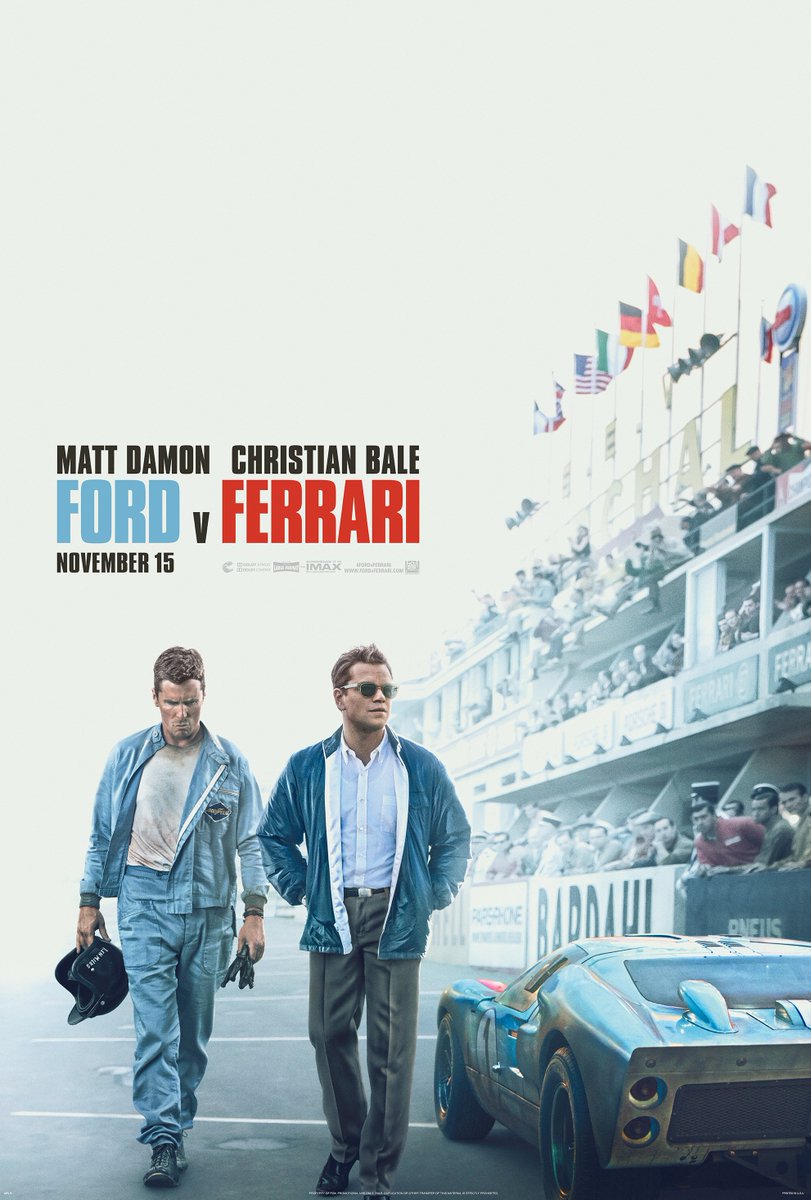 I remember this film getting a ton of promotion when it was first coming out. You couldn’t walk a few steps without seeing some kind of advertisement or poster. I can see why since everyone loves cars and you would definitely at least now about both companies. I can’t say that I ever followed the competitions much though so at least whoever would win, I wouldn’t know the outcome much. It’s a pretty good movie but one that is hampered by a pretty bad ending. I suppose it is usually difficult to change any parts of the ending when you’re based on a true story but if there was ever a time to do it, this would be it.

The story effectively has two main characters. First you have Shelby who used to be a great driver but unfortunately he can no longer race at high speeds anymore. His heart just can’t keep up with it and so everything gets really blurry. He now works as someone who repairs and sells cars. One day he is approached by Iacocca representing Mr. Ford. He wants Shelby’s help in creating the ultimate race car so they can win Le Mans. Shelby figures this is pretty much impossible since Ferrari has such a strong hold on that race but they are willing to spend anything so why not right? He knows just the man for the job.

The top racer around is Miles. He has won many races over the years but unfortunately they don’t pay the bills very well since his bad attitude often costs him any shot of getting a sponsor. So he’s retired from the business at this point but Shelby pushes him back in. Perhaps by having the best racer and the best car they can actually have a shot at this. There are corporate suits trying to get in the way though, specifically Beebe who didn’t get along with Miles when they first met and now has a huge grudge. The grudge is so big that he would rather lose than see Miles come out on top here.

There is definitely a lot of drama here. I don’t know enough about the historical events to say how accurate it is or not but either way it is very entertaining and that’s the important part. I like the feud between Ferrari and Ford. It makes for a good reason as to why Ford is trying to hard to win this one. He feels like he absolutely has to win this or all is lost. That’s why Mr. Ford is a bit disappointing later on as he seems to lose that fire in favor of the suits calling the shots. Even leaving the race midway to go out and eat seemed a bit odd. I know it’s 24 hours so you need to go somewhere but have the 5 star food go to his suite or something since it’s so important to him.

Allowing Beebe to be the head of the race division again after telling Shelby that he would have no boss was also an odd move. It just seems like Mr. Ford’s mind can be easily changed and his big speeches don’t amount to much since his mind can be changed so easily. It’s not a great look for a man who considered himself to be a real power player. He gets manipulated with ease so while Beebe is a worse character, Ford just looks weak. Beebe being so petty that he would sabotage his own team is just an awful look for the guy. He’s really lucky that he wasn’t fired at this point.

The only executive I actually liked was Iacocca. He was one of the few guys who would stand up for himself and did well during the first board meeting. He didn’t let Shelby deter him the whole time and he had a voice with a good amount of power. Ultimately he still won’t try to rock the boat so at best he will give Shelby a heads up and then dip but I appreciate his doing at least that much. I don’t think most of the others would have done that.

As for Miles, he does get himself into a whole lot of trouble by being so emotional. Shelby tries to help him on several occasions and Miles usually find a way to get himself into trouble. I don’t blame him for being upset at being put on the bench at the last second though. That did feel like a betrayal so I don’t blame him but other scenes like throwing the wrench and causing a scene at the race weren’t good looks. His wife certainly has a hard time of it with everything going on but ultimately she did good to be very supportive when it counted. I thought she was a really fun character and helped to flesh out his side of the plot.

While Miles had his issues off the track, he certainly lived up to the hype on it. He was the best driver without anyone being even close. He knew the right turns to take and breaking all of those records was really impressive. I’d say a good part of why the film is good was due to him being one of the main characters. Additionally Shelby did a great job on his side of things and I would say that he was the best character.

Shelby knew how to play the corporate game while also making sure that things went well on the track. He would stop people from trying to sabotage his racer and he also played some tricks on the rival. Shelby was a big time competitor and his only mistake I would say was being passive with Miles at the end. He should have just told him to race hard and keep going as normal. Ultimately he gave Miles a choice but in a way that still made it seem like slowing down was the right call and I can’t say that I agreed with that at any point. Even if the person suggesting this idea wasn’t trying to mess the heroes up, it just makes no sense. It’s super risky to slow down and don’t you want to go as fast as you can to set more records? That would have been the right way to do it.

Ultimately a lot of characters share the blame for the ending. In the end I suppose Ford was unable to get past the bureaucracy no matter how much the leader thought he could. Ford is still a very top to bottom organization in this film and that does prevent things from being done efficiently and in the right way. There is a time and a place for it but it certainly came as a detriment in every possible moment during this movie.

Overall, Ford V Ferrari is a solid movie. It’s well written and has a lot of good characters. The pacing is good so you are really engaged from start to finish and don’t really notice the length. I did not like the ending of the film which definitely does sour the experience and takes away most of the replay value though. You probably wouldn’t want to watch it again after the first showing. I would still recommend you watch it at least once though. It’s clear that a lot of effort was put into this and they really did a good job of creating this film from top to bottom. You definitely get to experience what it’s like to drive really fast.