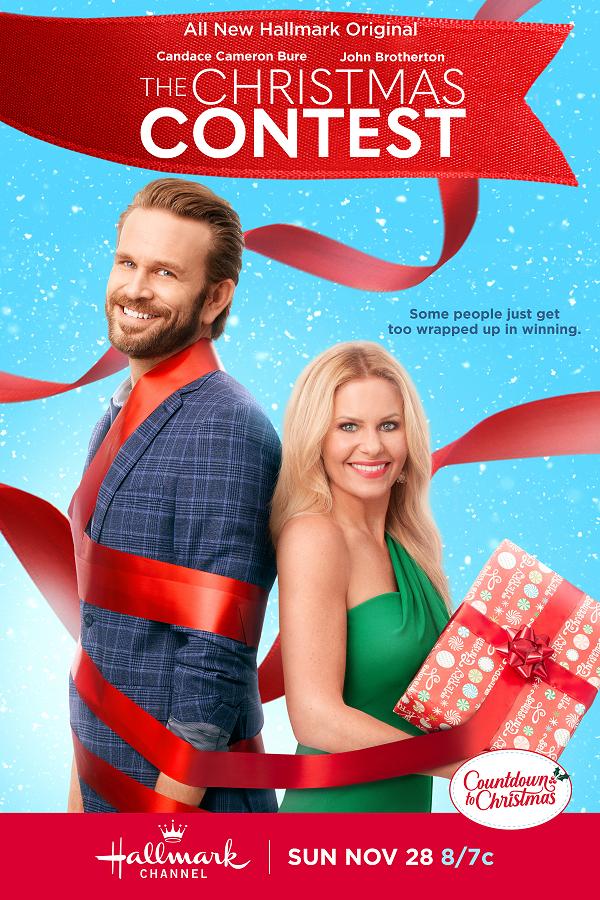 It’s time for the next Hallmark Christmas movie! This time we get a contest between exes who did not split up on the best of terms. As a result there is a whole lot of bitterness in the air and you can tell that things are going to get a little tricky for these two. I like the premise since a contest is always fun and it’s a cool change of pace. Some parts of the film definitely don’t work as well as they could have but at the end of the day it’s still a wholesome movie with a lot of fun parts.

Lara is a girl who is too busy for Christmas nowadays. She’s a super successful business person now and has even become the COO and she just doesn’t look back at the past. Unfortunately she will need to confront it now as her mother asks her to enter a Christmas contest. So she reluctantly enters and of course her ex Ben is there as well. Now she really needs to win this contest to make sure that he doesn’t get the last laugh but it won’t be easy. This guy is also really good at Christmas trivia. Still, if she doesn’t defeat him then she will never know peace from her past.

The contest has different phases. The first round was a quiz show, then you have the baking competition, a singing competition, and the final one is to decorate a Christmas tree. I actually thought it made for a fun contest even if some parts of the contest weren’t too well thought out. For example, last place gets the same prize as third place which is $1000. Why would that possibly be the case? What’s the incentive to coming close to first? That was a bit of a mistake if you ask me because there is just no way that this should be right.

Then towards the end the film starts to get a little cheesy as the characters feel that competing at Christmas against each other isn’t something that they want to do and it really feels like they are throwing the contest under the bus. These guys worked hard to set up this Christmas contest and did their best to make it a lot of fun. You’re going to throw it all out just like that? That’s just bad sportsmanship and the company shouldn’t have let them get away with this. Sure, it’s likely that the contest was rigged by the time the finals were around since the check was already printed with both of their names but it just doesn’t feel deserved.

If I was the guy in charge of the contest, I’d have handed them an empty check. If they don’t want to properly complete the contest that they signed up for then they don’t get to have any real money. It’s as simple as that and it would have been 100% justified. That’s the crazy part here. It’s still meant to be a feel good moment of course but I was a little salty on behalf of the competitors who tried their best but lost out. They didn’t lose just to see this happen.

It goes without saying that the romance is on the weaker side here. Lara and Ben were already together and it didn’t work out. Sure they’re both feeling festive for the holidays but that’s even more reason to think that this won’t last and this is just them being very emotional. It’s a super risky move to restart the romance again and I actually think it would have worked a lot better if they had just stayed as friends. Trust me on this, the whole movie would have really been executed to perfection if that was the case. Just make it a fun competition and they see that they get along really great as friends. It was never going to happen but I can dream right?

After all the best part of the movie is when they are having a lot of banter at each other. The two characters can’t help but constantly take shots at each other whenever they’re on screen. The shots never go too far though and it’s just enough to keep them on their toes. Lara may have been reluctant to enter but ultimately she does a good job and makes for a solid heroine. She really wants to win and ultimately stays classy about it like not badmouthing Ben in front of his mother when her cake gets sabotaged.

Then we have Ben who is a little more openly manipulative like with getting kids on his team to win brownie points from the audience. That’s why it took me a little longer to realize that he would be the main love interest and not the mean ex who gets defeated by a childhood friend. Gradually Ben starts to be a little nicer and I guess we can just interpret it to his being desperate to win. It still makes for an odd subplot though because it’s hard to root for Ben since he doesn’t seem to care about the kids nearly as much as he should. Not exactly the role model of the year right? Well he knows his Christmas knowledge at least.

One of this film’s strengths though is that it takes up a decent amount of time to give the side characters some development as well. I could have done without the subplot for one of the kids who was worried that he would mess up and cause trouble for everyone. The plot barely went anywhere. Then we had Ben’s mother who was always very set in her ways and didn’t want to make friends. This was a good story arc as Ben shows her that you’re never too old to shake up the routine and have a good time. I’m not sure I picture myself making any new friends when I’m older but you shouldn’t be cut off to the possibility.

Then we have Lara’s mother who was always very business focused and tried to get the heroine on that path. I thought she was solid and at one point Lara is too dramatic with how she tells her off. This is a trend I’ve seen in more than one Hallmark film where the leads blows up on the parent(s) for being too controlling but the problem is that the movie never showed them being anything other than super nice so the moment kind of falls flat a bit. It doesn’t feel as earned as it could have been.

As always the film is fairly short and with so much going on the pacing is on point too. While I had some issues with the film, you could say it’s also because I was really invested in this one. I always love contests and the writing was really good here. You still get your usual Christmas backdrops and baking but with the addition of some fun banter. I’d say there was a lot more of it than usual due to the story and that was a big plus.

Overall, The Christmas Contest is a pretty good film. Hallmark delivers as always and even if you know how the film will play out, you will enjoy the journey there. At the end of the day that is always the most important part for any movie since you need to be able to enjoy it. I’d definitely change the ending but would still recommend it to anyone looking for a fun Christmas movie. You may even learn some Christmas trivia. I assume the trivia here was legit but you’d probably want to look it up just in case the movie is messing with you.