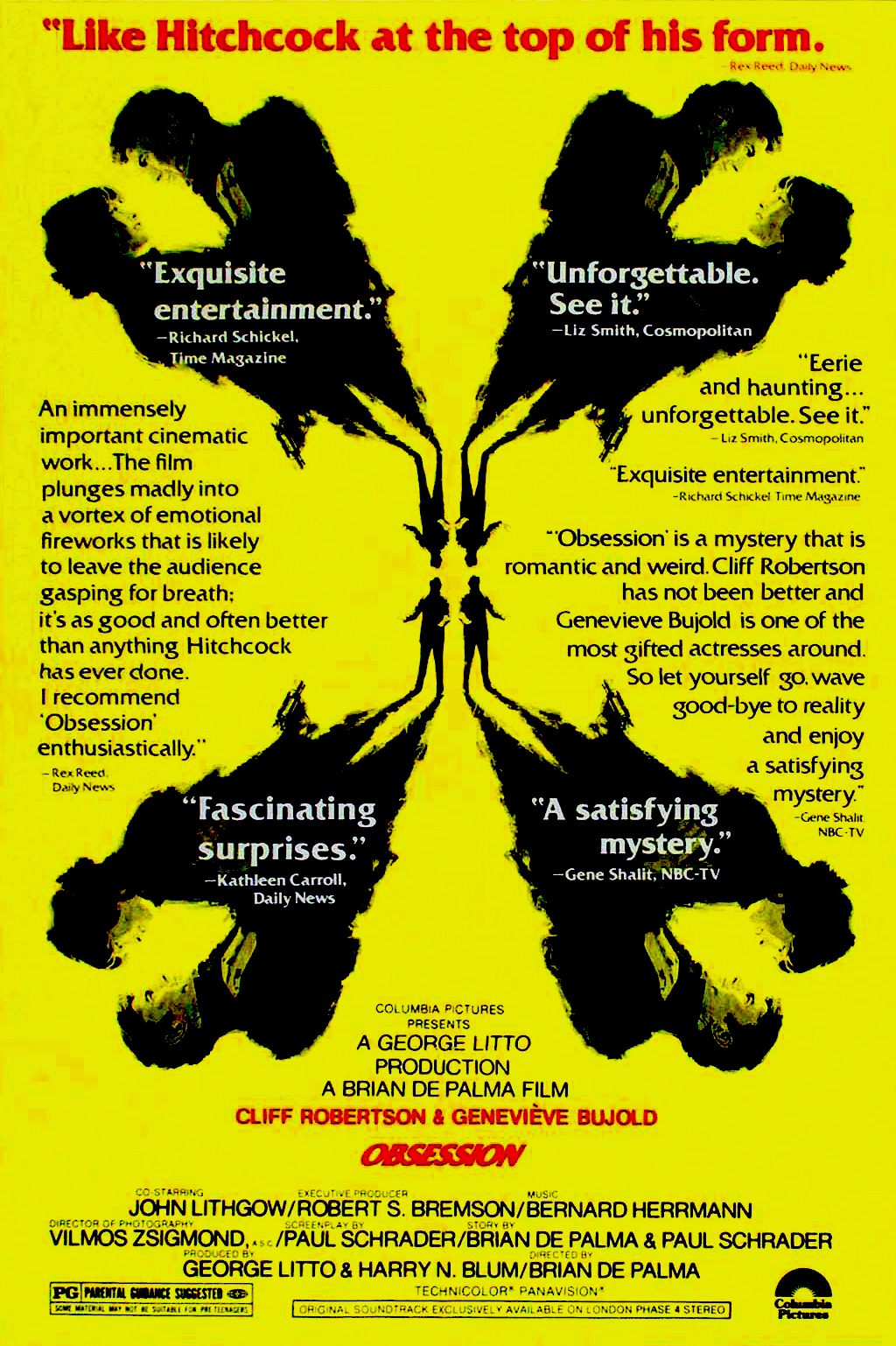 Obsession is a pretty interesting mystery/thriller. Things get a little trippy at times and there’s a whole lot going on. It’s got a very unique vibe to it where you just don’t know if you’re expecting a happy ending or not. It’s got that retro atmosphere to it that works well and while the final twist is big and yet not, I wasn’t sure how to feel about that one. It makes some earlier scenes a bit iffy. So all in all….this film is all over the place and you won’t be forgetting it at least.

The movie starts with Michael going through a big tragedy as his wife and daughter are kidnapped. There is a ransom but the police tell him not to pay it so he grabs a suitcase of plain paper and tries to fool them. This doesn’t go well as there is unfortunately no good plan here at all. The cops follow the villains to the base but beyond yelling “Hands in the air” don’t seem to know how to protect the hostages. The wife is murdered in the car crash while Michael’s daughter Amy was left in the house and then vanished. She is presumed to be dead though.

Many years later Michael is trying to restart his life and things are going well on the job at least. On a trip to Italy he meets a lady named Sandra who looks a lot like his old wife. He figures that this is a perfect chance to go on the rebound so he asks her out and the two are getting along really well but is this almost too good to be true? He starts to get obsessed into turning her into his wife as he searches for the part of his heart that is still missing.

You could maybe go deeper into the plot but I like to think of this as the general synopsis before then plot goes deeper or any twists in there. One thing I liked about this one a lot more than Vertigo which had a similar plot was that the main character doesn’t seem as deranged. Yes Michael starts to really go off the deep end here as you can see with him asking Sandra to start walking and talking like his late wife did. The difference is that it doesn’t seem as threatening. In Vertigo you felt like the guy would snap at any second while here I didn’t get the impression that he was downright dangerous. It’s a thin line of course but I don’t think he crossed it.

It does make him look bad regardless though. Michael is clearly still going through a lot of trauma and this is how he’s coping but it’s not a healthy way to go about it. Then of course he also has a lot of regrets about how he handled the original kidnapping case by not bringing the money and wants a chance to do it right this time. The climax gets really intense for him in this angle. He makes a lot of mistakes but you can sympathize with how rough things got for him as well. If he could have kept more of a clear head then the movie would have likely gone very differently for him.

Then you have his business partner Robert who is doing his best to keep the company afloat. He wants Michael to move on and hopes this trip to Italy can help. He’s always rather understanding even when Michael is starting to go crazy but Robert does put the company first. He gets a fairly big role in the film and makes for a very intense character. I would say he is one of the standouts here. The guy does very well in his role.

Finally you have Sandra and of course she is a pivotal player here. The romance may seem a bit easy and she definitely gives Michael too much leeway in ordering her around though. At first things were okay so the instant he started to be a little off she needed to call him out and put a stop to that immediately. You can’t let things escalate and then you’re on a good path. She barely even knows this guy too so letting him take too much control would put things in a really bad place.

Now of course the twists at the end of the film can change some or a lot of what I’ve put in below as far as context goes. I won’t give away the big twist here but basically it was a very longshot plan. Things had to happen just right for this film to really happen. One character in particular had to look very bad unfortunately. I’d say the romance itself also got very iffy by the end of this. The ending is memorable with more explosions and tension than I was expecting though. The film really ended up having a grand climax.

In general deciding whether to give the kidnappers the money or not is always tough because if things go sideways then you will wish you had done the other thing. No matter what option you pick, there is no guarantee that things will go well and that’s what makes it a tough choice. So throughout the whole film you have that undercurrent of regret. The movie is well written and my only real issue would be the weak romance and how Michael starts to quickly deteriorate as a character. On the whole it’s good though.

Overall, What you think of the twist will likely impact how effective the film is for you. Personally I do think the movie tipped its hand to the twist really early on if you pay attention to the opening scene but the good part of that is the film isn’t pulling this twist out of a hat. So it really makes sense both in the moment and in hindsight. The writing there is solid and at the end of the day you will be intrigued by what’s going on. There was a lot of planning here in the movie and it would help in a re-watch as something to think about. Maybe not the greatest thriller out there but I would recommend it to see what you think. It’s a cautionary tale on why you don’t want to ever get to obsessive over anything or anyone.