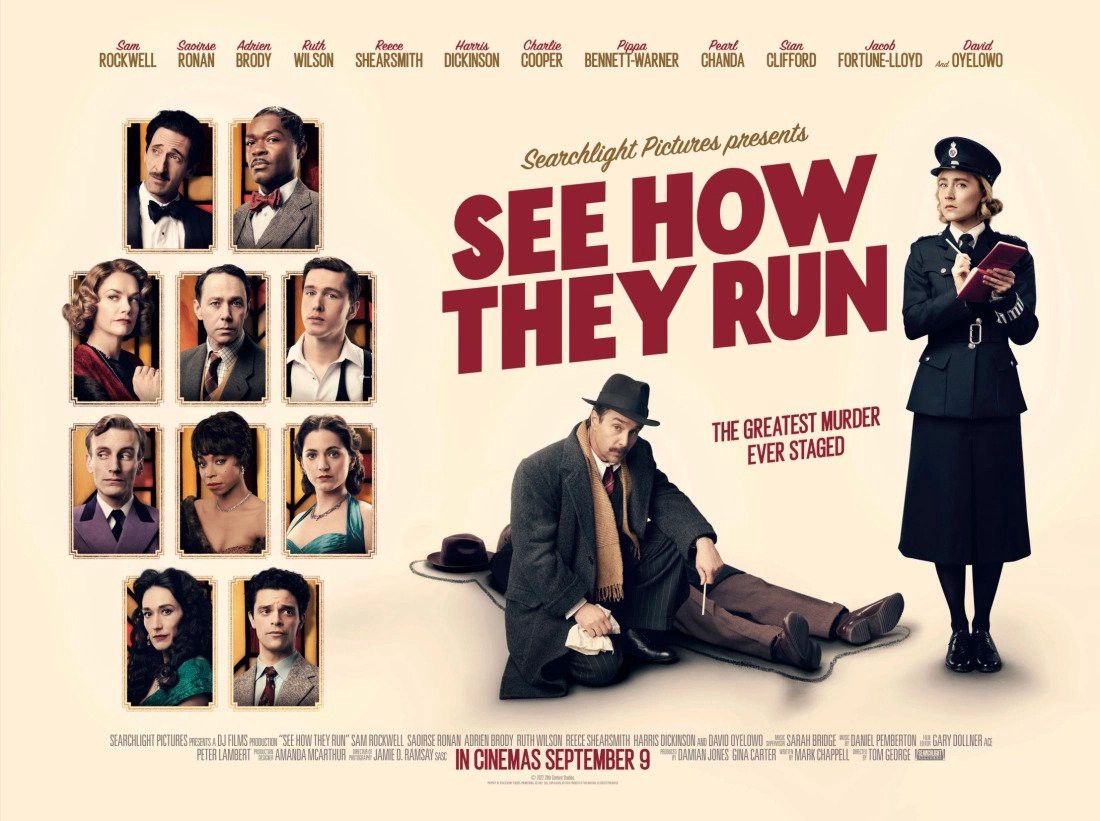 See How They Run was a really fun mystery film. It’s poking fun at the genre a bit while also delivering on a very solid murder mystery. You’ve got solid music here and a really solid opening. Throw in the good cast and this is a movie that you don’t really forget. You don’t see a ton of mysteries compared to other genres so it’s always fun to pick out a winner. I’d definitely recommend checking this one out.

The movie starts off with Leo narrating as he talks about how the murders are always predictable and he takes a ton of shots at “The Mouse Trap” which is a play that’s being turned into a movie. The guy holds nothing back but then he ends up being bumped off himself. It made for a nice twist since the film had been leading him up to being the main character but that wasn’t the case. Instead Inspector Stoppard and Constable Stalker are the main characters as they take on the case. Yes, Stalker is actually her name which was another bit of fun by the film. Can these two solve the case or will their differing styles come between them?

The Inspector is a hardened detective type who likes to slowly gather the clues and figure things out. That’s his style and he’s rather good at it. Constable Stalker is more about quickly gathering the clues and jumping to the ending. She likes the thrill of the chase and means well but tends to jump to conclusions as a result which annoys the Inspector a lot. This makes for a fun dynamic with a whole lot of banter though so I definitely enjoyed that. A big part of why the film succeeds is because of these two characters who really steal the movie.

The Inspector has a whole lot of obstacles in his path like the police commissioner who is more worried about optics than what is actually going on. That guy is easily caught up in jumping to the end as well and gives promises that he can’t keep so he’s not exactly the highlight character here. The Inspector has to succeed in spite of him and does a good job. Even Stalker tends to get in the way sometimes but at least she also has a large list of contributions to offset that.

It was a bit underhanded that she wrote down a private conversation between the two of them and used it against him later on though. She nearly got the Inspector in a whole lot of trouble. Yes she was just trying her best to do the right thing but that’s why it’s important not to jump to conclusions. That nearly got very dicey for sure. At least she doesn’t let it get her down though, Stalker never lets her enthusiasm for the case wane.

Then we have Leo who may have died early but keeps a large presence in the film through a bunch of flashbacks. Basically every time the characters meet a suspect we get to see how this guy did something mean to them. Leo is basically as antagonistic as possible. He messes with the characters, tries to get characters to cheat with him, is full of himself, etc. He goes out of his way to antagonize every character in the movie which is impressive…but of course that is also what led to his end.

It was also fun to see Agatha Christie also get to appear here. For a bit there I thought they were going to keep her off screen throughout the movie but she actually has an active role in the climax and gets to interact with the characters. That was definitely a really intense moment and I like how she picked up a few things from her murder mystery novels. She actually came close to having the villain on the ropes.

As for the actual villain, of course I can’t say who that was, but the reveal worked well. The villain had a good motive so you can see how the villain cracked in the end and started bumping everyone off. There is something almost funny about the explanation too and how it led to all of this. It’s true that the reactions to the murders in a way incentivized them to keep on going because the intended effect wasn’t working. “The Show must go on!” is a powerful mantra that is used a lot but of course if someone is trying to stop the play then that means they will have to keep on going over and over again until it actually stops.

One thing I have to give the film a shout-out for are the visual techniques that are used here. You constantly get different boxes on screen at the same time so you see the moment from different perspectives. It’s almost like a comic book in some ways and it’s not overplayed. These moments always just help to enhance the scene and make it more memorable. It’s like going the extra mile for the actual mystery.

You also have a fair chance to try and guess who the murderer is. All of the characters have a good amount of screen time and have definitive personalities. If you’re really paying attention to the dialogue then you should have a good chance here. My pick ended up not being correct so we’ll see how it goes for you. The film is always ready to throw you a few curve balls as well.

Overall, See How They Run is a great mystery film. It’s got a lot of replay value and the fact that the movie is able to tie it into the original play while being different was very clever. The climax uses this really well and there was a lot of detail put into this one. The writing never falters and it works really well in being a bit self aware on what usually happens in murder mysteries while still taking itself very seriously. I was quite impressed with how this went and if we ever get a sequel that could be fun.