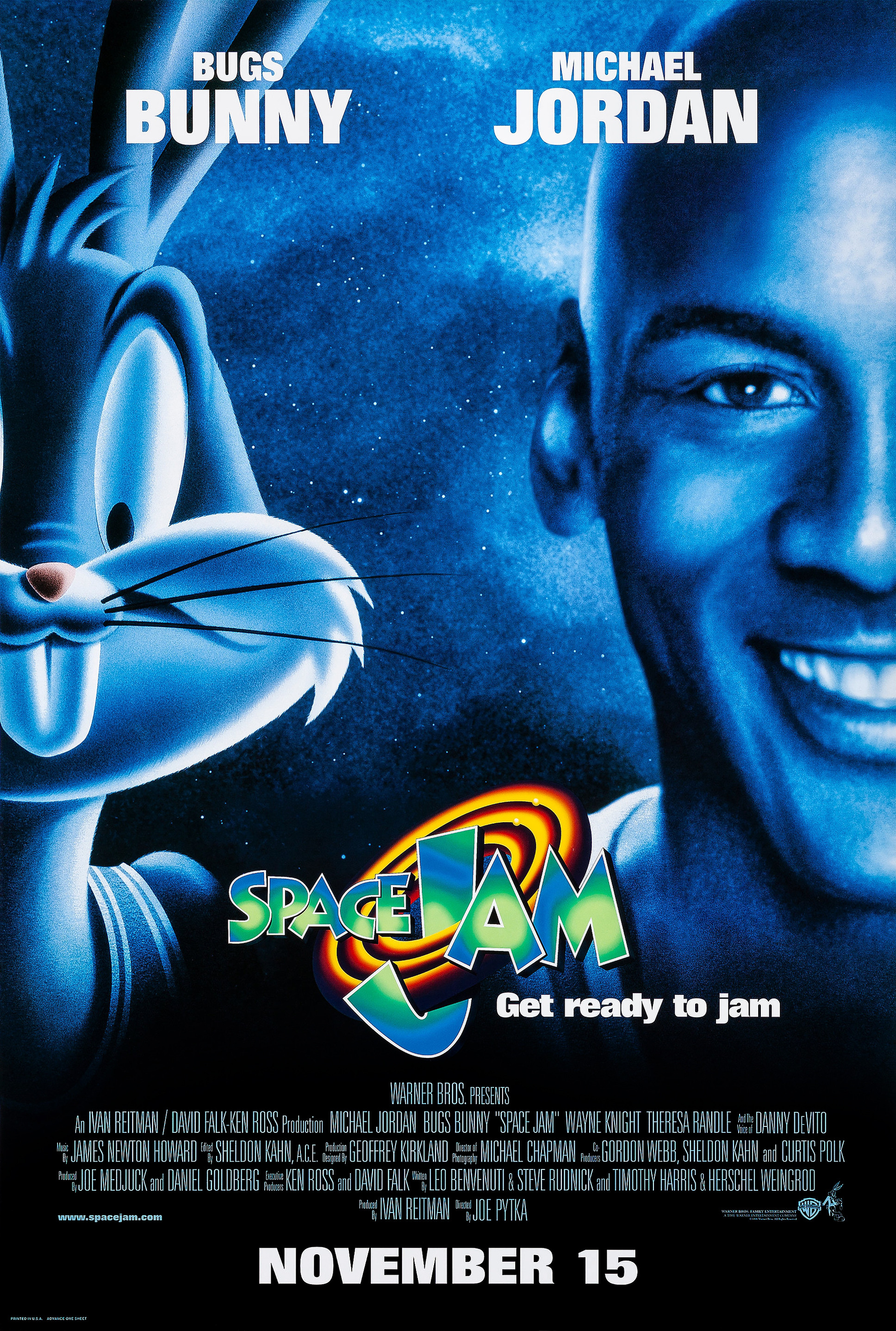 It’s time to revisit the original Space Jam. This film was always a lot of fun as you got to see all of the Looney Tunes running around and everyone played in a really intense Basketball game. You do have to overlook some parts of the premise since we know that the Toons wouldn’t get crushed so easily though. They would have easily beaten the Monstars even without help if you ask me so there are some power level concerns here but ultimately you still get a lot of fun. The movie balances the serious and comedic moments well.

The film starts off with Michael Jordan retiring from Basketball and pursuing a career in Baseball but unfortunately it isn’t going very well. One day while playing golf he is sucked into the Looney Tunes world. Basically Bugs has called him in because they were getting decimated by a group of alien invaders and the only way to save their lives from being eternal prisoners is to defeat them in a basketball game. It won’t be easy though as the invaders have stolen the skills of some of the best Basketball players in the world and now they’re all around 15 feet tall. Can even Michael’s skills be enough to turn the tides against them?

So of course this is what I meant about the Looney Tunes looking a bit weak here. No way they would lose to the aliens. These guys are multiverse busters who can do the impossible and yet they are on the losing side? I have a tough time buying that one even if it is a comedy so you can’t take it too seriously. We see the enemies crushing them during the game as well with raw power and they just don’t respect the power of the Looney Tunes all that much. Once the heroes go crazy they start to even things out though.

Part of what makes the movie work so well is that the Basketball game is absolutely on point. You have a lot of good plays here and a good attention to detail was put on every scene. This actually felt like a real game and I have to say that this is important. You want it to feel real (As real as it can be with the Tunes) because it adds more drama and stakes to the game. You definitely don’t have many penalty flags as the villains get to do whatever they want but beyond that they’re still following the core rules.

Each character also gets their big moment. Someone like Daffy is usually the center of the jokes but he does help by buying into the secret stuff real quick. Bugs is still the mastermind here who tends to get the last laugh the whole time. Lola looks great as she’s one of the only characters with real basketball talent who can hold her own without using Toon Force. Then you have everyone else doing their best to contribute so it’s a real team effort. They may get beat up a whole lot during the game but they keep going.

Meanwhile Michael Jordan makes for a good main character. He’s got a lot of skills and is a confident main character. Even when the heroes are losing big at half time he keeps his cool and tries to think of a new strategy to win. At the end of the day he’s just doing his best to play and save the world. It’s not like his personality is super deep or there’s a lot of character here but he executes all of his scenes really well. He’s just a guy trying to do the right thing and sometimes that’s better than trying to make things overly complicated.

Then you have Stan who is doing his best to keep his job by making Michael happy. His direction is clear, he has to make sure nobody messes with MJ and that’s exactly what he does. He’s one of the main comic relief characters here and I’d say that he does a great job of that. You’ll usually crack a smile whenever he’s on screen. He’s got a good dynamic with Michael. Then you have Bill whose role is small but he makes the most of it. You have to love his absolute confidence when he takes over the field and he isn’t worried about the monsters at all. He even had a total plan for the heroes if they were on offense but unfortunately it turned out they were on defense.

Those are just some examples of the fun dynamics and solid comedy throughout the movie. I wouldn’t say that every joke landed of course and that will always be par for the course for any comedy title but for the most part they were able to land and that’s what counts. Then it helps that the characters are just fun. The Monstars aren’t particularly notable that’s for sure but they did get a high budget transformation which was intense. They actually looked really strong so you had to respect that and they delivered on the pain.

The animation really holds up well to this day. You could tell me it came out in the 2000s and I wouldn’t bat an eye at the animation. There are some areas where you can tell that it’s a 90s film like with the song selection but in a very good way. The songs were all pretty solid and we got a lot of very fun montages here. There’s a ton of replay value to be found here and you can watch the movie several times. It’s all very fast paced with something going on at all times.

If there’s any small issue I’d have, it’s that I’d like to see the Looney Tunes get to show off their individual talents a little more. Road Runner’s speed should be incredible in Basketball after all so lets see that. Daffy may usually play second fiddle to Bugs but he’s usually still in the conversation when it comes to Toon Force so seeing him get more big moments and plays would have been nice. I do like the rivalry that they still have here though and that’s something you want to keep. Bugs gets a big moment here and there but I would like to see him dominate the court more. Of course you don’t want them to be winning too easily but I’d say you should just scale up the villains a bit more and then it all balances out.

Overall, Space Jam is definitely a very unique movie and one that knew exactly what it wanted to do. At its core it’s all about having a crazy Basketball game with the Looney Tunes and the film never forgets this. Space Jam actually takes itself rather seriously which is also very important. The stakes are high after all and then there’s even the subplot in the human world with the players trying to get their skills back after they were stolen. There’s just a lot to like here and Space Jam is a great movie all around. It’s not carried by the Basketball scenes or by the Looney Tunes, but a lot of effort was put into it. I’d definitely recommend this to any film fan that wants to watch a fun flick.