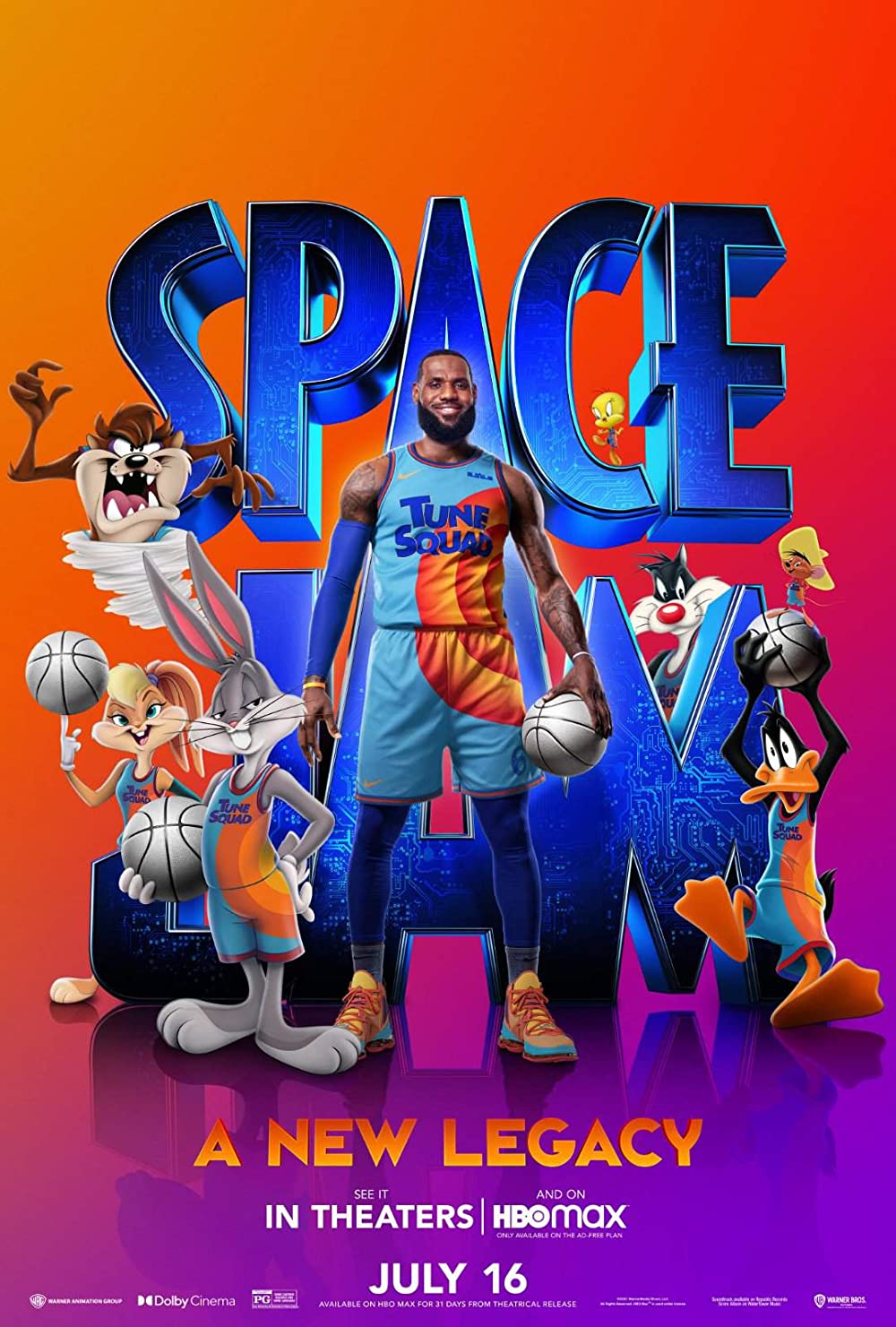 After revisiting the first Space Jam it was time to take a look at the sequel. In many ways the sequel reminds me of Airplane 2. It’s still a good movie but it’s really just trying to copy the first movie without really trying to stand out on its own. As a result it misses a lot of the soul of the original and instead of being a great movie, it ends up being a solid adventure that will always be overshadowed by the first.

The movie starts with Lebron trying to get his son Dominic to focus on Basketball more but this ends up turning the kid away from the sport. What he really wants to be is a video game developer and at a young age he has already developed a reasonably sophisticated Basketball game. It’s actually rather impressive but the big video game designer camp takes place on the same day as Basketball camp which Dominic had already committed to. Lebron doesn’t wan to let him drop out so Dominic runs away to a server room and the two of them get warped into the digital world. Now Dominic is being held hostage and tricked into teaming up with a villain group known as the Goon Squad. Lebron will have to assemble a powerful team in order to stop them but is there any way to beat such a group? He may have to call in the Looney Tunes.

Unlike the first movie we do have a full act where Lebron goes around recruiting everyone to his cause. Initially he wants characters like Superman and King Kong to be in the group but Bugs tricks him at each corner and ensures that Lebron only gets the classic Looney Tunes. It was nice to see cameos of Superman and the League with the DCAU artstyle and a lot of other quick movies during this period but that’s really it as far as cameos go. None of the heroes really get to leave their respective worlds except you may see them in the background during the game. So this goes back to the classic Space Jam plot of the basketball game.

The biggest issue here is that the game is using Dominic’s custom rules meaning there are special abilities and all kinds of crazy rules. It reminds me of when Mario wrecked the Tennis game series by making the latest entry so gimicky. This basketball game has style point rules so the amount of points you score is completely arbitrary based on how many points the writers need the characters to score. In the first film the villains were up by around 50-100 points at halftime so this time? They’re up by 1000.

The sequel is trying to make everything bigger and bolder but in doing so they did wreck a lot of the tension of the game. The first movie actually had a lot of danger throughout but with this one since the rules are so fake you didn’t really get that. It’s not as fun to see the game when everyone is cheating. It gets so bad that the Algorithm is even able to negate points just because he wants to. That was the biggest moment of cheating by far and went way too far. Like cmon, you’re just going to hack the basketball game and say that points don’t count? Then that means the Algorithm could have been doing that all time or he could have just made their points to go to 0. There’s no reason for him not to cheat further when he can do it so the whole climax doesn’t make sense anymore.

The humor is also not nearly as funny as the original. You don’t have the laugh out loud moments that the original had and in a way the Looney Tunes just don’t have as much personality or enough to do. I’d say the best moment low key was when Bugs reflected Marvin’s laser back at him. That was the kind of hype Bugs moment you’d expect from the guy. I also liked the fakeout with Michael Jordan but how cool would it have been if he actually showed up? That would have been great!

The animation is good but I dare say the original looks better which is a little concerning. It’s been over 20 years since the original after all but no shot compares to when the villains powered up in the original. The characters were just more substantial and of course when they turned into CG at the end they really couldn’t keep up. Even the live action moments felt more movie budget quality in the original. I think that may be at the heart of things here, the sequel just didn’t feel as much like it got a theater budget and was just a fun movie to bring the characters back.

Finally there’s one scene that just feels like it was mishandled in the worst way possible. So the villains have someone with Dame Time, an ability that freezes time for 3 minutes because that’s how fast he can move. So when the villains bring him onto the court, Daffy brings out Road Runner who proceeds to get absolutely destroyed and can’t move at all. Why? It would have been so much better for Dame Time to be wrecking everyone and then Daffy brings in Road Runner for the second round. Say he can move so quickly that even time stop can’t completely stop him. Would have been one of the best moments in the film but instead he gets absolutely devastated in the fight and the old lady has to use some vague Matrix abilities to stop him. Not nearly as satisfying when you think about it.

As you can see, when comparing the film to the original it definitely is doomed in every area. That said, if you look at it as a stand alone film then it isn’t bad. It’s still a lot of fun the whole time and the pacing is on point. The game has a lot of good moments and I do like the visuals. There isn’t an area of the film that I would say is particularly weak when looking at it in a vacuum. The movie can hold its own for as long as it takes even if you see the missed potential of how the film could have been a whole lot better.

The human plot for example isn’t very interesting. Dominic is extremely annoying the whole time. It’s one thing to not want to play Basketball and to be upset at Lebron but he handles everything very immaturely. For example when Lebron tells him that the Algorithm is fooling him and lives are at stake, Dominic refuses to believe him. You’re saying he is going to listen to a computer program he’s known for an hour at best compared to his own father? That was an awful moment. He also tries to make decisions on his own without letting Lebron knows which naturally makes things tricky.

As for Lebron he could be a lot more tactful with how he handles the situation. He did try to play the game before it glitched out though and if Dominic really did already commit to the basketball camp then I can see why he wanted him to go there. Ultimately the drama is mainly Dominic’s fault the whole time but I think they could have done a better job of adding some more interesting elements to this. The Algorithm and the Goon Squad also aren’t particularly interesting. There’s not a whole lot to them. I think the Algorithm at least had some potential but by the end you just wouldn’t have much to say about him. He’s manipulative and knows how to cheat but that’s about it.

Overall, Space Jam 2 has already started to fade away in everyone’s minds so it doesn’t have the lasting presence of the first. Still, if you wanted to see all of your favorite characters again then this is a solid one to pick out. It would have been nice if the characters who made a cameo could have appeared more though. Go all out with the premise and actually have Superman on the basketball team. That would have been a lot of fun and might have even made more sense with the Goon Squad. Everyone could be using their special abilities the whole time and it would have elevated the film to new heights. Maybe they’ll try that for the third game though.