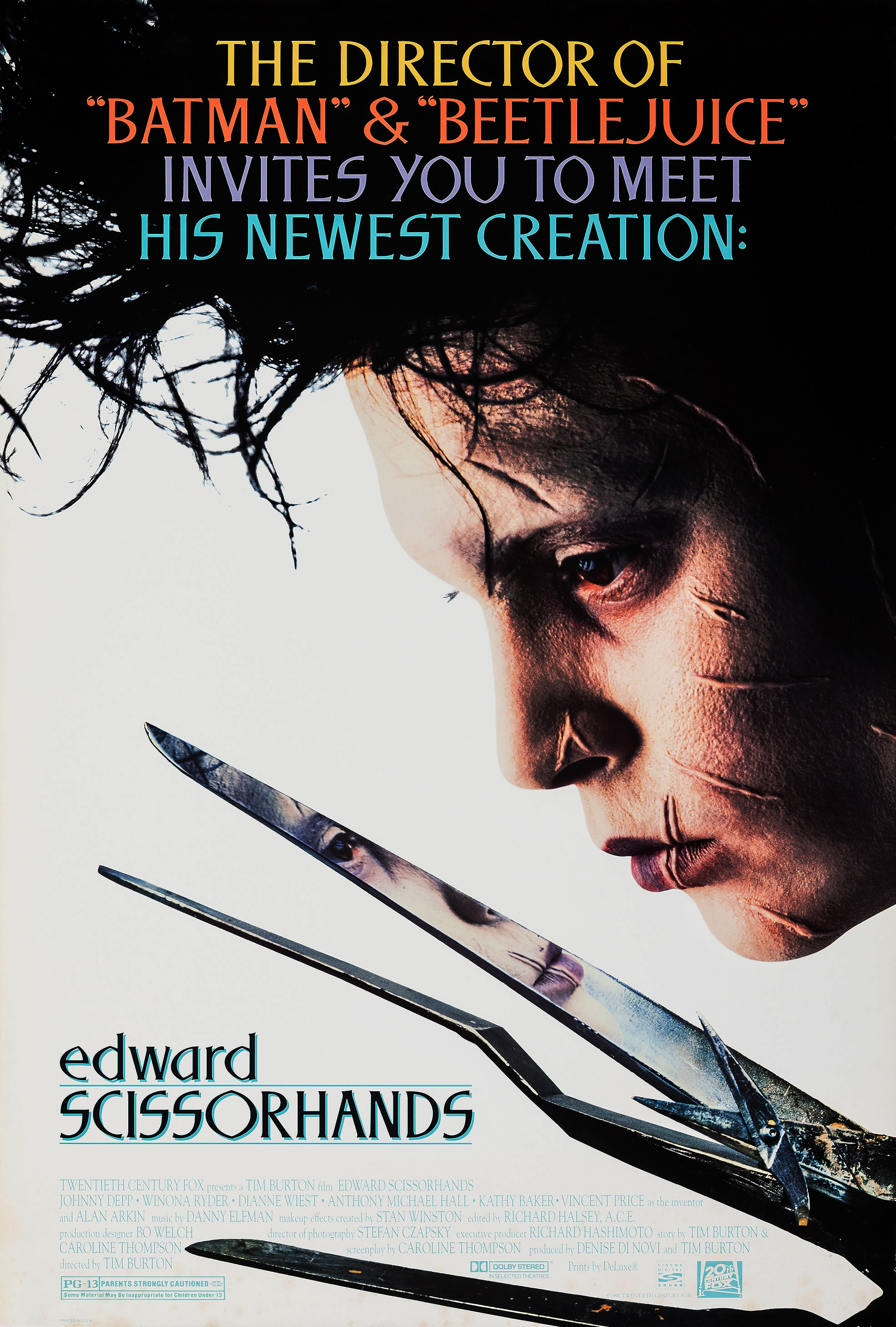 Edward Scissorhands is a film that’s actually quite a bit different from my mental image of how the film would play out to be honest. I wasn’t expecting a horror per say but I was expecting something very dreary the whole time with a lot of dark lighting and jump scares. Okay….so I guess kind of a horror. Instead the film is like an odd slice of life taking place in a happy town. It’s maybe more of a surreal comedy. Either way I thought it had some good ideas but ultimately I wouldn’t say it was particularly good.

The film starts off by introducing us to Peg…actually it starts off by revealing that this is all a flashback first. That’s still one of the absolute worst story telling devices if you ask me. For one thing it guarantees that the person survives. That’s more of an issue with action titles compared to one like this but it can still be annoying. Additionally you’re always more engaged with the present than the past so automatically it makes you want to jump back to the present again instead of being stuck in the flashback. No matter how you slice it that just makes this a very questionable decision.

Back to the story though. Peg is a saleswoman so she goes around trying to sell products but everyone knows her already and nobody wants to buy anything. That’s when she heads to the creepy mansion…for the first time I guess? It seems like Edward has been here for a while so I guess she just chose not to go to the castle but she doesn’t seem scared or anything. Maybe the film mentioned she had moved in recently or something…but this actually makes less sense the more I think about it. Hmmmm……well she goes in there and meets Edward who as the title suggests has scissors for hands. She invites him to live with her since that seems tricky. The town like him at first but gradually you realize this will not stand because humanity is always really tough on any superhero/monster/creature in these kinds of things. No way it stays peaceful for long.

Right away I can tell you that my main issue with the film is really just that Edward constantly scarring and cutting himself always feels rather painful. It’s hard to look at the guy directly with all of the scars that he has. You just want to turn away and as he is a main character that’s not exactly an option here now is it? The movie does a good job of showing just how hard it would be to live like this though. Every single action you take now has to be thought about very carefully because a slight slip of the hand could cause serious injury. In an instant your very life can be changed and it’s not like he can take them off either.

In general Edward is also not a character who is used to the ways of the world and so he can come off as a bit naïve and new to everything at first. He has to be taught everything as if he was a kid and that’s usually not my favorite character type. If he was a little more sharp it would be more difficult for the characters to put him in tricky situations or gain the upper hand. There is a pretty solid twist involving his character though which was good. I thought that it landed rather well and if they ever want to do a sequel to this film it would certainly make things really easy. I would like him to have learned from this experience though and be a little more knowledgeable in general.

There’s one neighbor here who is desperate to get together with Edward but in general she seems to be desperate for anyone. Her very first scene is about trying to seduce the pipe guy but fortunately he stays strong…is how I interpret the scene tbh. We don’t see the climax of this. The scene of her trying to get Edward is certainly a bit painful particularly since it’s not like he even understands the concept of romance yet. In general all of the romance in this film is particularly weak for that reason. I don’t see how you can build a proper relationship when one of the characters doesn’t really know what is going on beyond the most basic part of the concept.

I do like the set designs though. The town looks fantastic with how colorful it is. Everything really stands out and it’s a perfect contrast to the dark castle which is as ominous as ever. Tim Burton is definitely good at maximizing the visuals or anything that he does. In a way he probably did too well on the parts that are hard to look at like the scars and all but otherwise he should still get full props on the town.

The main character in a way is Kim as she grows to know Edward and like him but I wouldn’t say that she was great. She’s another character who falls to peer pressure and allows her boyfriend to trick Edward and get him into trouble. She doesn’t realize the full scope of the plan at first but she still did know that she was helping to commit a crime and was getting Edward into trouble when he didn’t know any better. She took advantage of the fact that he would help her do anything and that wasn’t a good look.

Meanwhile Peg did well in bringing Edward into her home and doing her best to help him out. She worked hard on learning how to apply make-up to hide his scars and treated him normally from the start. If the rest of the town was like her then things would have gone well. Her husband Bill was also good and very nonchalant about the whole thing. Nothing could ever phase him and that’s what I liked about the guy. It would be very easy to panic at what’s going on but he just takes it all in stride.

I liked how in general all of the characters acted like this was actually a bit of a normal thing. It’s a really great break from the usual panic and all of that about how they’re in danger. Just see this as a positive and keep it moving. The movie has a lot of fun light hearted scenes as well like with Edward giving everyone and their pets a haircut. He is really great with those scissors and you would expect him to be since he has been using them his whole life. You still get a little anxious whenever he’s cutting the dog’s fur at such high speeds though. I feel like even if I knew he was an expert I wouldn’t be able to let him give my dog a haircut because I’d just be stressed out. Like the 1 in a million chance of something going wrong would happen to me.

Overall, Edward Scissorhands is a very unique film. I think it deserves a lot of credit for going in a different direction than you would expect. It is fun and also fairly ambitious. At the same time it’s not really for me. The scars just make it too hard to watch Edward in any of his scenes and I also thought the ending was a bit of a downer. It’s not a satisfying way to close things out with some characters looking awful and ultimately nobody stepping up. In a way no character looks good by the end and they all should take a massive part in the blame. Given that this is all a flashback we can assume that nothing changed in the present either which is really terrible when you think about it. Perhaps a sequel could lightly retcon some of that if it takes place a year or two later or something like that.