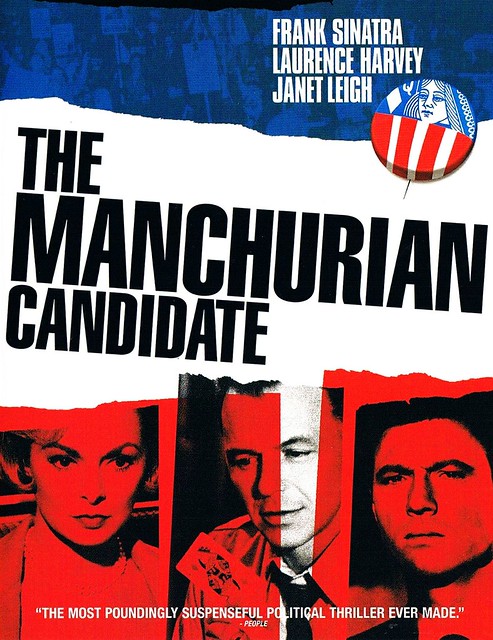 Considering a certain event in the new Captain America series and the general plot of the Civil War film, it’s a good time to look at this film. Unfortunately, it was quite terrible so don’t go in expecting me to tell you how great it all was. It’s a very sad film where the characters continue to make mistake after mistake. The brainwashing is advanced enough that it completely clobbers a whole group of people and America doesn’t realize how many undercover fighters are around. Can the country stop these guys before it is too late…or is it already too late!?

Marco was with a platoon behind enemy lines. Unfortunately, his group was captured and brainwashed by the Soviets and forced to murder each other. One member of their group was turned into a sleeper agent (Raymond) while the others were allowed to return to the country. Why weren’t they all turned into sleeper agents? Who knows! Anyway, Marco starts having odd dreams and realizes that something is not right. He starts to uncover the truth behind Raymond, but what can he do about it. Few believe him and even fewer have enough power to do anything about this. Marco’s going to have to go with his gut instincts here, but it may not be enough.

Typically, you’d think that the film would try to make Raymond likable so we’d actually be sympathetic to his plight right? Well, this film decides to take the opposite approach and makes him a guy who is not likable in the slightest. This is why Marco suspects that something is up since the brainwashing forces every member of his platoon to like the guy. Even once Marco finds out that playing cards are the key to stopping Raymond, he decides to leave the agent alone for one more night with his fiance. Big mistake.

As a result of Marco’s blunder, Raymond destroys her along with her father and claims many more innocent victims along the way. He even gets one last murder as the film ends because nobody was fast enough to stop him. One subplot that is also grating from the start is that he and his mother don’t get along at all. This leads to a series of insults and sob stories as we find out that she is the one controlling him. Raymond can only watch as she takes out the playing cards and brainwashes him once again. No worries, he is partially cured by the end so he remembers enough to take her down, but naturally he doesn’t take any prisoners.

Not that this film needed any more subplots to destroy the momentum, but after a “Miller Time” moment (Downing a lot of beers) Raymond remembers an event from the past. He met a girl and instantly they fell in love, but his mother warned him to get away from her and he made sure to listen. The flashback felt like it just kept on going for ages and ages. It barely even mattered in the end and just added two more individuals for Raymond to murder in the end. Civil War definitely handled the concept better, but I suppose that this goes without saying. Even the fight scene between Marco and the guy who worked for Raymond wasn’t any fun, but I suppose that I should be grateful to have a fight scene at all.

The bottom line is that this film just wasn’t any fun in the end. My films need to at least have some entertaining aspect to them, but there was none of that to be found here. I felt bad for everyone that Raymond destroyed, but not quite as much for him. The police should have had the election guarded a lot better, especially considering that Marco knew that Raymond might try something. Letting him go on his own was definitely not their best strategy. Of course, they did foil the Soviet plan, but apparently there are many more of them hiding in the country already. The film doesn’t end with a whole lot of hope for the Americans, but at least we know that they won in the end. I tried to think of a silver lining here, but I really can’t. This is the kind of film that will have you staring at the clock on the wall for its entire duration. There are no positives or saving graces here. I suppose you could at least make the argument that it could have been worse though.

Overall, The Manchurian Candidate is another critically acclaimed film that ends up falling completely flat. None of the characters are likable and most of them are only introduced so they can be destroyed later on. The brainwashing was way too complete and unbreakable. Especially since it has already been years that have passed, I find it hard to believe that it would be so effective. Just looking at a deck of cards is basically enough to stop Raymond. The whole thing was just too easy for the Soviets from start to finish. I don’t really blame the government for not believing Marco since this is all a rather unbelievable story, but it didn’t make his job any easier. I definitely do not recommend this film so watch it at your own peril.