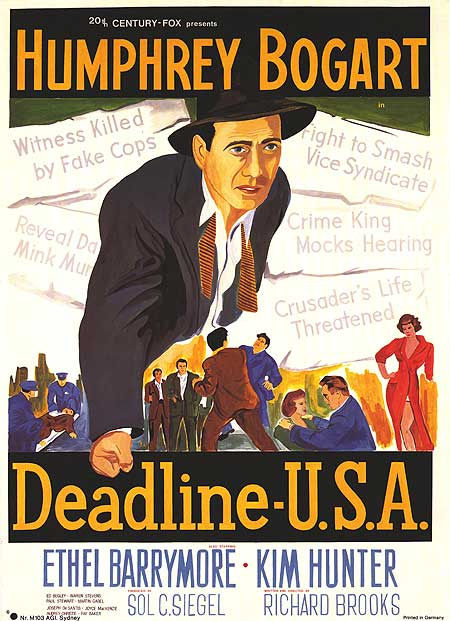 It’s time for an old school mafia/gangster film. I haven’t seen too many of these yet so it’s nice to add another one to the list. It’s handled pretty well and makes for an interesting movie from start to finish. I think the main character could have been a little better to make it easier to root for him, but I suppose it was trying to show that he was just an ordinary joe who wanted to stick up for the paper. Bogart plays the role extremely well as always and it’s a film that has certainly aged well.

Hutcheson is a proud newspaper man. He’s never gone for sensational clickbait over the actual news. He goes for the facts and just that. Unfortunately this means that his paper is losing sales and a competitor wants to buy him out to crush it for good. There’s not much Hutcheson can do about it since the board of directors are okay with the sale. He has enough time for one last scoop though and decides to attack the vicious gangster Rienzi after one of his reporters is attacked for following the story. Nobody gets to take down one of his staff, not while Hutcheson is still on the case.

With all of the fake stories being spread around and alternative facts used instead of actual ones, this film is a good reminder that you have to be careful what you believe. All of the papers in this film were either paid off by Rienzi or were too scared to attack him. This meant that Hutcheson and his crew had to dig up all of the dirt on their own. Luckily, these guys are some of the best in the biz and were ready for such a challenge. Hutcheson is also a pretty confident and bold person himself so the villain’s threats never get to him. He defies the villains right up til the end and even if he is taken out of the picture, the facts have now been released for everyone.

The film has a very sudden ending, but one that works well. You can reasonably draw your own conclusions from it and they are positive ones. While we may not have gotten an epilogue, you can see how things will go from here. It may have all come together a little too well in some cases though. For example, Hutcheson’s one flaw is that he’s typically drunk and a little crazy. He forgot that he was divorced to his wife for a while because he had one too many beers and once he remembered, he wanted to call it off. It was a little late for that as she already found the rebound guy. It turns out that the guy didn’t have any dirt on him even though Hutcheson tried to find it. By the end, the ex-wife realizes that she doesn’t want a new man and comes back. It’s nice for the lead of course, but that part was maybe a little over the top. It was the one subplot where I couldn’t sympathize with Hutcheson at all. He’s a great newspaper man, but that was part of the problem for his social life. He had very clear priorities and his ex-wife was apparently not one of them.

As you’d expect from a newspaper film, the plot is very intricate and there are twists upon twists. More elements continue dug up by the reporters and then you get the full story at the end. It’s definitely a sad story all around, but one that will keep you guessing. It always seems like a fair mystery with my only issue being that some characters look really similar. For example, the rebound guy looked just like one of the gangsters so I was waiting for that twist. Rienzi is a decent main villain although he doesn’t get to appear all that much. He’s clearly a lot smarter than his minions, but it wasn’t enough as he gets outsmarted by the newspaper the whole time.

The court scenes were pretty fun. There wasn’t much that the heroes could do there since the paper’s owners had already given their consent, but it was still nice to see. The court rooms definitely haven’t changed much at all as it looks like an exact replica to the one I sat in a while back. The Judge made the right call since an appeal to emotion isn’t the right way to win a case. One of the executives did stand up in the end though so the paper got to have a happy ending thanks to that. Hopefully sales pick up so she can gain back her money.

Again, old films like this one are so good because of the dynamic writing and plot. The script is leagues ahead of anything you’ll see in the modern day. The characters all feel very real and professional. While this may not always help Hutcheson, it does work well with the film. The plot was good and handled well as we got to see how a lone newspaper can deal with a gangster threat. They may have fallen for the fake cops gambit, but they controlled the game otherwise. All of the reporters were very good at their jobs and everyone brought something to the table. The only plot that the film should have cut out was the drama with the ex-wife. It didn’t eat up too much screen time though so at least it wasn’t a huge issue, just a minor thing that would have made the whole experience even better.

Overall, Deadline USA is a good film. It’s certainly one that I hadn’t heard of before so it was a nice hidden gem to find. The film’s not very long so the pacing never slows down. As one of Bogart’s final films, I can safely say that it was a good decision to be a part of it. The film certainly would have lost some charm and charisma without his inclusion. It’d still be a film, but some leads were just made for the roll and he did a good job here. For once he didn’t even get knocked out despite getting in a car with the villains. You definitely have to love that confidence. I highly recommend checking this film out.