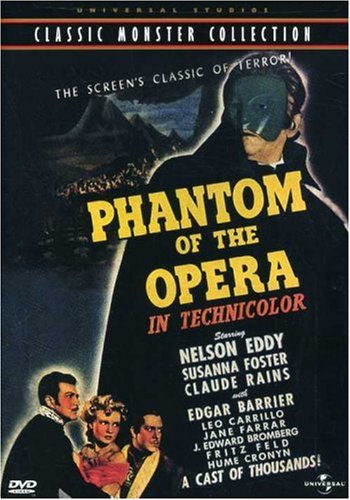 It’s time for a retro film that is rather iconic. I guess I should say that the Phantom of the Opera is rather iconic to be precise. It has had many adaptions on just about every medium over the years, but this is the first one that I’ve checked out. (Pretty sure) It’s a decent enough story with some fun characters and okay dialogue, but it doesn’t stand out as one of the all time greats or even as a super solid story. It gets you through the film all right and the pacing is good, but I would have liked the main character to have stopped leading everyone on by the end.

The story starts off with the Phantom being kicked off the opera because his hands are going bad and he can’t play well anymore. While he should have been rich since he served for 20 years, he spent all his money getting lessons for a girl named Christine. She doesn’t even know that he is providing the lessons for her and believes that she is getting them for free. While the Phantom is at least 20 years older than her, he wants her to be with him, but lacks the courage to say so. In the meantime, he will help her as much as possible from the shadows so she will owe him later in life. He realizes that if the opera won’t let her be the lead singer on their own, he’ll have to take the top singers out of the picture and threaten the opera into making the switch.

It’s a classic story of a villain thinking that since he is doing nice things for someone, they have to reciprocate. The whole situation is also his fault as he mistakenly thinks that someone stole his song and murders a guy for it. (Not even the guy that he thought stole his song) As a result his face is half burned off and he is forced into hiding. Fortunately for him, the Phantom is a master of hand to hand combat and has a surprising amount of physical strength. He murders a bunch of people with ease and the film hints that he could have taken on the two male leads as well before losing to a cave in. He’s not a very good/interesting villain, but at least the design worked rather well. Who doesn’t like the simplicity of a cape and mask combo? It’s why Batman got so popular.

I do have some issues with the main heroine though as she was annoying throughout the film. Christine has a lot of admirers as you can tell by now. The main two are Anatole and Raoul. She knows that they are both interested in her, but decides to play the field. She goes out to dinner and accepts flowers/gifts from both of them. She notices that they constantly fight over her, but seems to thrive on the attention. It’s rather inconsiderate of her, but that’s consistent in the film. She is not upset at all to learn that the main singer was poisoned and even celebrates in front of everyone since she will now have a chance to be on the big stage. There’s nothing really heroic about her and she even feels bad for the Phantom at the end. Sure he murdered a bunch of people, but he liked her so he couldn’t have been a bad person. You have to take a double take at her reasoning there since it’s rather outlandish. She was glad he got to hear his music one last time while I think it would have been poetic if he had gotten caved in before hearing it. That’s just me though.

While Christine is leading them on, I can’t feel bad for Raoul and Anatole since they know it. It’s hard to say who the better character is, but I’ll give Anatole the edge. At least he does know music and is a professional. He’s polite and ultimately has the better plan which ends up capturing the Phantom. On the other side, Raoul’s plan ends up failing and he seems to enjoy her musical career a little less. He basically wanted her to retire when he first showed up which instantly signals a bunch of warning bells. Fortunately, one of the higher ups told Christine that music is more important than anything else and it seems like she has decided to follow that advice.

The character roster is small, but that means they all got a lot of screen time. The film’s writing was pretty solid as well. While I didn’t care for the characters as much as in some of the other retro films, the script was still on point. I enjoyed all of the sarcastic/passive aggressive banter from all of the characters. Most of them did not get along in the slightest, but they were very subtle about it. The humor may not have been a great success, but it was also handled very mildly so it didn’t get irritating or go in the way of the story. The main comedy angle was that one character believed that a ghost was causing all of the trouble and would constantly describe him by pulling out his nose and imagining a beard. I forgot why, but he would never want to refer to the ghost by name. Perhaps he thought people would make fun of him, but the ones that he did tell took it pretty seriously for the most part. There was only one guy who disagreed and that’s not bad considering that I thought everyone would make fun of him for it.

Overall, This is a fairly good film. It’s not the greatest out there, but it was enjoyable during the run. As I mentioned, it’s rather short as well so the pacing is on point. It’s cool to see just how large an opera house is. I imagine that it would be difficult to find a criminal since there are 2500 rooms and he can keep hiding in different ones. Hopefully this will teach the Opera staff not to put the Master Key in an unlocked drawer in the main room that anyone can break into. Especially since their ex staff member was the main suspect of a crime and everyone knew about it. These guys just didn’t think ahead. The actual plays in the film didn’t seem all that interesting, but fortunately they never got all that much screen time at all. With a better cast, this film would get another star. As it is, I’d recommend checking it out. There’s not much to the film, but sometimes that makes it easier to watch. The plot is as simple as can be so you can just follow the journey from start to finish without thinking about it much.