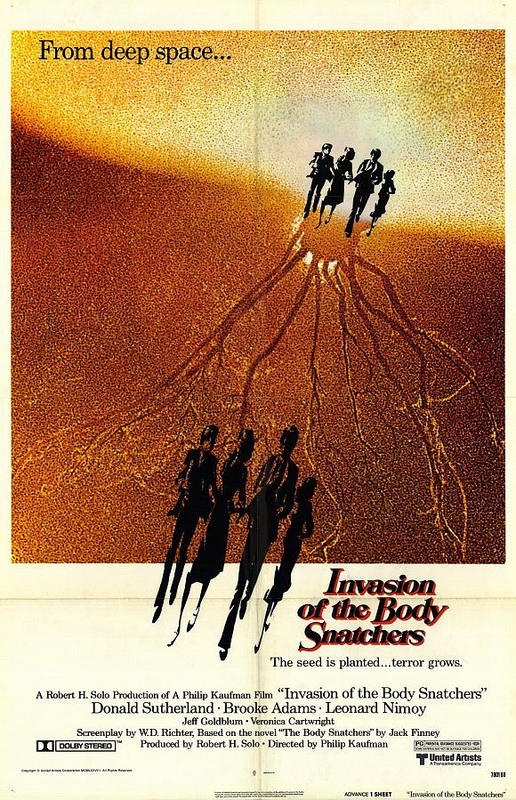 Invasion of the Body Snatchers is one of those sentences that wouldn’t have much meaning without the iconic films. That being said, the idea is certainly an interesting one that has been used time and time again by several films. After all, what would you do if someone you knew was replaced by an alien and nobody else knew about it? It lends itself well to horror plots because of how frightening that can be. The film does a good job of keeping that tense atmosphere.

Here’s the plot in a nutshell. Elizabeth notices that Geoffrey has been acting strangely all of a sudden. It’s like he became a new person over night. The same thing starts to happen to a bunch of people outside and the few others who notice quickly change their tunes just as quickly. Elizabeth finally realizes that this is an alien invasion. She finds a few other people like Jack, Matthew, and Nancy who learn about this and have not been turned yet. The only issue is…what can they do about it? It’s not like they can defeat these aliens since they are just as strong as humans and all of the government and law detection forces have already been turned. Is it best to just submit and let themselves be taken?

From the start of the film there isn’t a lot of hope for the characters. What little bit there is gradually deteriorates as the film goes on. The worst part is that the characters can’t even sleep if they are next to any of the aliens. If they do, an alien copy is produced and sucks the life out of the person. The only way you can fall asleep is if you’re next to a friend, but what if that person has actually been turned? You can only trust your comrades so much in this kind of situation. The duplication is a long process but it might as well be instantaneous since it’s hard to awaken once you’ve been tagged.

Naturally, Matthew does just that. He walks to the backyard and decides to take a nap. I get that he’s sleep deprived, but did he have to make it so easy for the aliens? He even let his hand dangle to the ground so that the alien plants could grab him and start the transfer. Matthew had his moments, but I can’t say that he was a good character. He was a little slow on the uptake and not as resourceful as the others. His short romance with Elizabeth also hurt his chances of being likable.

Elizabeth is a reasonably good lead for the majority of the film. While it takes her a while to really do something about the situation, it isn’t a problem that can be solved easily. That being said, her rushed romance with Matthew was pretty bad. Her man may have been snatched, but moving on so quickly isn’t really in good taste. You can say that it was the stress of the situation or a moment of passion but I just see those as excuses. Both characters suffered from this moment. I’m inclined to say that Elizabeth is still the better character over Matthew, but it’s close.

The side characters range from being average horror characters to actual thinkers. Nancy in particular was surprisingly good as she got behind the idea of the plant being the problem right away. There wasn’t any doubt or a plan to go visit the alien head quarters for kicks. She was the first to figure out that the aliens could be fooled and just brought her A game the whole time. Jack was a lot slower as he would fall asleep or get tired every now and again. He did his best once he got serious, but Jack just wasn’t quite as prepared for this. There’s also the suspicious doctor, but he’s so obviously suspicious that I wouldn’t trust the guy with a 10 foot pole. Remember though, this invasion isn’t happening. He claims that it’s all in our heads.

Back to the “Surprisingly intelligent plans” section, the heroes even decide to board a boat to another country. Sure, it may not get them away from the problem entirely but it’ll buy them some time. Unfortunately, it’s too late by the time they get there, but it was a good plan. At that point, the only other thing to do would be to just try and live normally while feigning no emotion. It’s not too clear on how the aliens know if you’re sleeping. It’s possible that you’ll be okay if you sleep so long as there are no aliens around. The problem is that they are microbe sized and have infected just about everything. Your house would have to be germ free to escape their influence.

I have to give the film a lot of credit for the ending. It’s handled quite well and is pretty unexpected when it occurs. The moments building up to it are just as solid and the execution as a whole is what makes it work. Depending on how you look at it, this could make for a fun sequel. It would be a last stand kind of film with one character trying to take out an army. That being said, not having a sequel let’s you play out the various scenarios in your head.

I want to say that the film had a good soundtrack, but it’s been a while and I can’t remember the tunes. I’m sure they were reasonably good tracks that worked well with the visuals though. Speaking of which, the film definitely had some disturbing visuals. The plant monster/alien bodies looked real weird before they turned into human duplicates. The dog with the interesting face was also something else. At least the transition of being turned into an alien is painless so that’s nice on the humans. It’s a sad fate, but at least it could be worse.

Overall, Invasion of the Body Snatchers is a horror film done right. The human characters don’t all talk like bad cliches. The plot was well thought out as well. While the film doesn’t have a bunch of “jump scares” the overall atmosphere is more effective anyway. The place is usually cloudy and even when the characters are in a sunny environment, it never really feels like they’re safe. It’s simply a break from the dangers that are all around. I’d recommend checking this movie out. It’s pretty fun and good survival stories are hard to come across so you want to pounce on the ones that turn out well.

3 thoughts on “Invasion of the Body Snatchers Review”