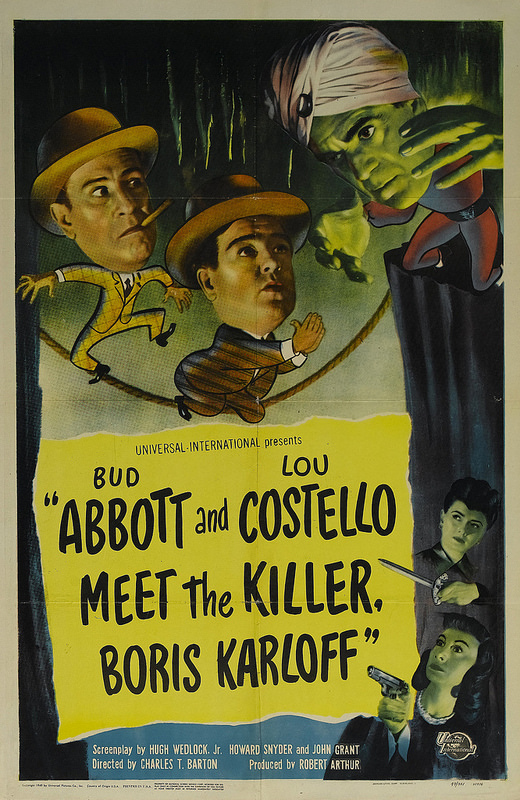 Abbott and Costello are back in yet another adventure. The two of them always make for an entertaining experience and this film is no different. While it may not be their best outing it still hits all of the right notes. It’s a timeless classic that most modern comedy films can learn from.

The film doesn’t really try anything new so it is all the same gags that you have come to expect from the series. That can work well for some and others may find it too predictable. For me, I’d say that it still worked well since if was executed well. Even if you know how various jokes are going to play out, it’s still fun to see them unfold. I’ve always liked Abbott and Costello’s joke style. The only joke that probably didn’t pan out was Freddie cross dressing and getting hit on by a random hotel guy. It seems like comedies love to use that trope at least once.

As this film is essentially a parody, most of the suspects are rather crooked. While there is one main villain who murdered the hotel guy, the rest of the suspects had wanted to do it, they were just beat to the punch. As such, this made it difficult to actually question anybody since they were all covering for each other. The detective certainly had a hard case on his hands.

Casey is the voice of reason here and probably the best character in the film. Even when he would be betrayed or woken up in the middle of the night he rarely lost his cool. Towards the end of the film he finally started to lose it but it was hard not too. He had a stroke of bad luck when he slipped and sprained his ankle in the cave. That part was so sudden that I definitely had to wonder how genuine Casey was. Was he actually in on the threat or did he want to finally get some sleep while Freddie wasn’t around?

Freddie was the main character though and he was pretty good. He doesn’t drink and does his best to think about what to do next. Thinking isn’t his strong suit so it’s nice to see the effort. He takes the initiative on putting the bodies on the elevator after all. He also knows what he saw even if everyone else doubts him. The guy may panic a lot and resort to stammering gibberish but we can’t all be super brave. His one iffy moment was when he kept on doubting Casey and putting him on the spot.

To Freddie’s defense, I also suspected Casey for a few minutes there. It seemed awful convenient that he had to head back home immediately after such a small fall right before the villain showed up. It was a pretty good red herring. I also wouldn’t have minded if Casey was actually evil. It would have hurt his character for sure, but it could have been the ultimate twist. It would explain why he is always so cool under pressure. Casey has a natural air of confidence about him as he talks with the cops and the suspects. Nobody ever makes him back down and he laughs at bullets. While he may get too enthusiastic about the murder at times, he always means well.

Even beyond that, it was just hard to guess who the guilty party was. Everyone had secrets and many characters in the film tried to write Freddie out of the picture. There were dangers around every corner so he was never really safe. The most dangerous situation for Freddie was either dangling from a rope in the cave or being stuck in the sauna. Both were tricky. I guess no matter who you chose as the guilty party, you’d be right to an extent since pretty much the whole cast was evil. Still, it wouldn’t count unless you got the person who was apprehended at the end.

The film teaches you a valuable lesson about how it is never wise to hide evidence to save your own skin. For a while there it was hard to even know who to root for. The heroes were just looking out for themselves after all and Freddie was practically asking to be arrested. Of course it may not have gone well if they had showed the bodies to the inspector but it would have been the right call.

As you would expect, the writing is quite solid here. I would expect nothing else from a retro film like this one. The witty banter between the characters is fun and makes Freddie’s character work. If the writing had been bad or halfhearted then he probably would not have been all that funny. You need solid writing for films like this one and I can only imagine what a disaster a modern version could be. There’s no language here and no dirty jokes. Try selling that in Hollywood nowadays, it would get tricky.

Overall, This film holds up really well. The gags are as solid as they ever were. The film moves pretty quickly and you’ll barely even notice the time as it whizzes by. The film doesn’t really make any mistakes either which is certainly hard to do. With the writing being on point as well, this is a film I can totally recommend you check out. It’s not quite as good as Who Done It as that will probably always be their best film, but I’m pretty early on with these team up films so it’s hard to say for sure.