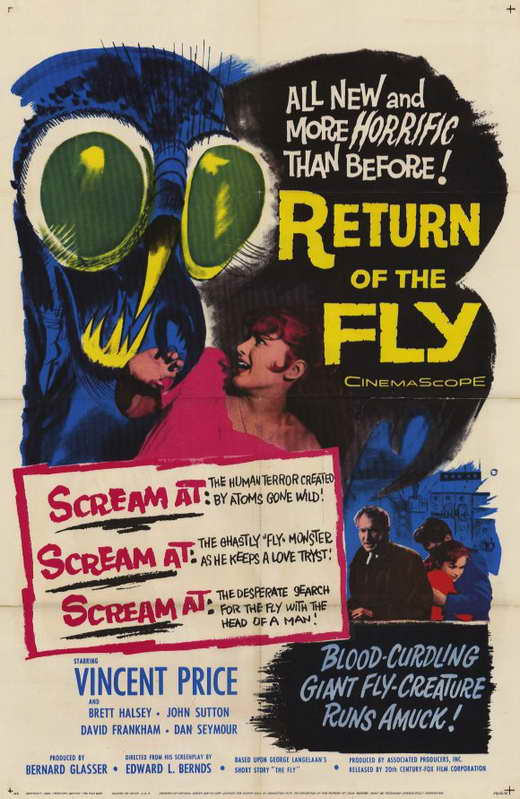 It’s time for the sequel to the original Fly movie. For the most part it’s not bad as the film goes on. The pacing is decent and the plot is fairly good, but the film ends up falling into a massive pot hole with an animal violence scene. Beyond that, it can also be annoying to see the heroes lose so badly to one opponent the whole time. It’s certainly a rather unique film and while you feel bad for the main character, you also can’t help but wish Francois could have said “I told you so” at one point.

Phillipe is in shambles over what happened to his father. After all, how can anyone take the fact that their father turned into an insect and died? Francois warns him not to go down the same path, but Phillipe laughs him off and decides to rebuild the experiments room and do the exact same things his father did. He wants to prove that the concept is sound and his father grew careless. He hires Alan as an assistant and they decide to live in the house of his child hood friend’s house and they’ll work in her basement. She doesn’t seem to mind and even though a romance may be lightly hinted, the film never takes that anywhere. I was pretty impressed although, that’s probably because the main heroine and her mother barely appear at all. They’re in the film, but their role is quite small. You wouldn’t be wrong to say that they were filler characters.

So, lets get the elephant out of the room first since it is of massive importance. What destroys the film is a scene with the rat as he grows human hands and feet. Alan ends up crushing him in a very long, drawn out death scene that is shown to be exceptionally painful to the rat. Animal violence is one thing and animal death is another, but a scene this intense and long is something else altogether. The film was in the grave from this point on in the film and it’s not as if anything could possibly save it. Even if the film was decent otherwise, it was doomed at this point.

Still, lets look at the rest of the film. The Alan subplot felt wildly out of place to be honest. He’s actually an international fugitive who earns money by ripping off inventions and giving them to local crooks. The cops have been after him for years, but the guy is too slippery. Fortunately he got a steady job over here just in time to rip Phillipe off. One of the cops did a good job of finding him, but ended up choking his accomplishment away by getting shot so easily. That was definitely not a great moment for him. It’s too bad since the cops never seem to win in these things. Ah well, at least he tried. Things don’t end well for Alan in this film but he still looked a little too good during the middle. He took down the cop, Francois, and Phillipe back to back to back. It was a little too much hype for one guy, but I can see why he evaded capture for so long.

Phillipe isn’t a very likable main character since he intentionally decides to bring the experiments back. He knows that they were the end of his father so why go through it again? It seems to be more about pride than anything else so it’s hard to say that his soul was really in it from the start. As such, it’s a little hard to sympathize with him at times. I suppose he gets his revenge and a pretty happy ending though so he probably won’t regret it much. On that note, the ending was surprisingly happy. I certainly wasn’t expecting that, but it’s a good thing I’d say.

The film didn’t really have a role for the two heroines or Francois. Francois offered words of advice, but Phillipe ignored them all and then Francois spent the rest of the film getting wrecked and blackmailed. It wasn’t a very flattering appearance for him. The design for the fly monster and the mini fly wasn’t bad. It’s certainly interesting even if it doesn’t make for a downright epic design. I suppose we’ll take it since it’s fairly unique although almost the same as the first film.

Return of the Fly’s main issue aside from the animal violence is pretty much that nothing happens for large chunks of the film. It’s very dialogue based which isn’t a bad thing, but it comes across as more uneventful than deep. We didn’t need more action, but more likable characters. All of the dialogue just doesn’t feel like it’s going anywhere and since none of the characters are developed, we don’t need to hear about their childhoods. I also don’t get why Phillipe is so scared of flies when he didn’t actually live through the events of the first film. It would have made more sense if Francois was the one who was scared of them.

Overall, Return of the Fly suffered from one major scene. It’s a bit of a shame for it since it probably could have scored a 5 or a 6 otherwise. It can be a little dull, but the writing was still fine and it didn’t make a bunch of mistakes. It could just be a little annoying to watch Alan trick everyone, but seeing Phillipe connect the dots was fun. That would certainly have helped to an extent. Still, the rat scene was in very bad taste and one of the worst animal death moments I’ve seen in a very long time. That sunk the film all the way to the bottom. One scene can absolutely change a film and this one is living proof of it. I highly advise staying away from this film and never looking back!