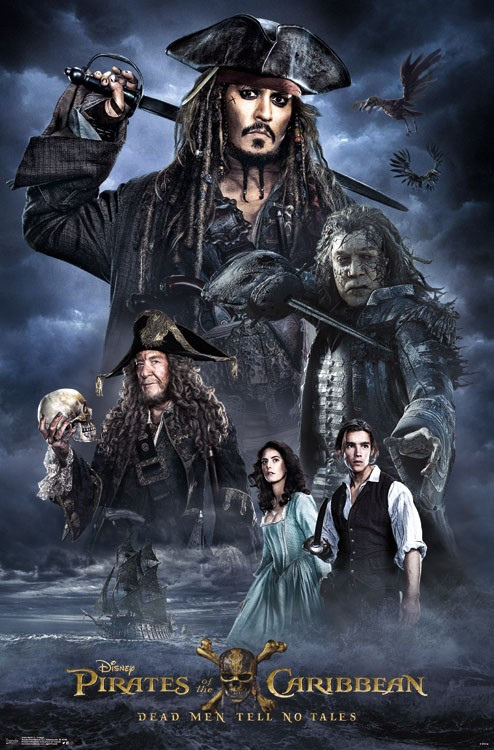 It’s time for another Pirates of the Caribbean film. This series has never been synonymous with quality and this film certainly doesn’t change that. It’s a bad mash of characters trying to be funny along with crude humor. I’ve never been able to get along with the franchise and at this point I don’t see that changing anytime soon. It’s dead in the water at this point. I like to think that the sequel will be better…but it won’t be.

The film starts off with Jack attempting to rob a bank. Unfortunately it seems like he let the door hit him on the way out so he fell asleep while getting drunk inside. The cops open the bank vault and notice him, but don’t do anything about it so Jack gets away. He gets kidnapped and captured several more times after this until he eventually runs into Henry and Carina. Carina wants to find this legendary treasure and Henry wants the treasure so that he can bring his Dad back from being an undead zombie. Jack just wants a good beer. Meanwhile, Salazar and his crew are hunting for Jack. They want to destroy him once and for all since Jack defeated Salazar back when he was just a kid. The race is on!

Yes, we finally get Jack’s backstory. It doesn’t add anything to the film though so we can skip that. Jack is still a very terrible character. He’s always drunk and everyone ends up pushing him around. He can fight to an extent, but usually just remains alive due to plot armor and writing shields. He helps people cheat on their significant others just because he can and seemingly has no morals. He’s always joking but since the writing isn’t good the lines don’t work well. It’s just a mess and that’s putting it lightly. There really isn’t anything likable about Jack.

As for the other main lead, Henry is fairly generic. I guess it’s admirable that he completely ignored Salazar’s threats and went to go get Jack anyway. Saving his father is a noble goal as well, but getting mixed up with these pirates may not have been his best move. He didn’t do a great job of saving Carina either. Henry is a huge step up from Jack, but he’s just pretty generic and there aren’t any really great character traits that he possesses to make him memorable either. You’ll just remember him as another pirate with a sword.

Carina talks a good game as the main heroine, but can rarely back it up. The defiant personality trope can be quite good when handled well, but you can’t just talk the talk. She insults everyone and is constantly bragging about how smart she is, but at the end of the day she doesn’t contribute a whole lot. Her inclusion into the film seems to mainly have been for fanservice and iffy dialogue so I definitely don’t think the film used her all that well. As with Henry, she can just be rather generic.

Next up is Salazar, the main villain. He tries to toe the line of being a funny villain as well as a super evil one. Unfortunately he falls down as a result. His funny scenes aren’t very funny and while he does murder a bunch of people, it’s hard to enjoy him as a villain. Between his design and the fact that it has taken him forever and a day to get revenge on Jack, you have to wonder what he’s been doing all these years. An old villain/rival, Barbossa shows up as well and gets his character arc. I wouldn’t say it’s a great one either as I just don’t like the character. It’s probably a good thing that he didn’t mention the plot twist out loud because that would have been very shocking for all parties involved.

This franchise may try hard, but at this point it’s probably going to need a full reboot to get good. One of the main problems as I mentioned earlier is how there is so much crude humor here. The characters are all rather grotesque. It’s not as extreme as in previous films but enough to make you shake your heads. The designs for the villains prioritize looking dead and old as opposed to scary. The writing is very bad and that ends up hurting the film as well. Throw in the fact that the film is super long and you don’t have the most pleasant of experiences.

I mean, the film also takes place in the olden times for extra salt. Can’t I at least have cool buildings to look at in the meantime? Part of the problem is that pirates aren’t interesting and this whole historical period isn’t very interesting to watch. Everything is very old and dirty. The ocean looks the same after a while and I just miss my neon glass towers. At least we did get an evil ship that had fangs and ghost sharks. Those were interesting enough I suppose. Jack and friends probably should have died during the encounter but the villains can’t catch a break.

There is an after credits scene so if you actually watched the film then I guess you should stick around for it. It seems like the MnMs villain is back which isn’t very exciting. Again, it was a crude humor gimmick where he litters everywhere as he walks with old candy and stuff. I guess they’re going for a horror element with that ending, but this series won’t be able to pull it off. It’ll be back to comedy mode before you know it.

Overall, The writers for the Pirate series must like playing it safe. I feel like just about every Pirates film is the same and they just don’t do anything new. It’s the same old story of Jack making a mockery of everyone and somehow managing to live into the next film. It’s a cycle that just never ends and the films keep making money so that’s not going to stop anytime soon. I just don’t even remotely see the appeal of the franchise and until I do, it’s probably a lost cause for me.