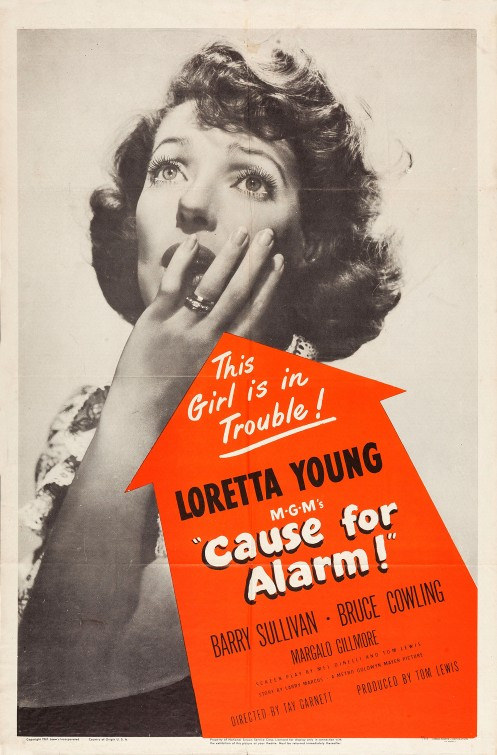 It’s time to look at a very old school thriller. This one may not have a bunch of explosions or guys running around in cool suits, but it does have a letter that could potentially destroy someone’s life. It’s a smaller scale thriller to keep you at the edge of your seat. It’s certainly aged quite a lot as the main heroine would likely act a whole lot different if this was made nowadays. I wouldn’t really call it a bad film, but it can make for an annoying watch and definitely doesn’t have a whole lot of replay value. This is one of those films that you only watch once for the suspense and then move on.

The plot follows a lady named Ellen. She used to go out with a doctor named Ranney but then she rebounded with George. They married very quickly but then George got injured and was forced into early retirement. He has now gone mad with paranoia that Ellen is cheating on him and that along with Ranney she plans to end his life. His only course of action is to try and deliver a letter to the mail man but he doesn’t have the strength to stand. He has to give her the letter to mail and then the government will come to protect him. Ellen doesn’t realize what danger she is about to get herself into if she delivers the letter. Who will win this battle of wits!?

The annoying aspect of the film is Ellen basically being at George’s beck and call the whole time. She has essentially made the wrong choice in getting together with him and has been paying for it ever since he was discharged from the army. As he grows meaner and meaner she still stands by him and tends to his every need. You just want her to throw him out or just ignore his various demands after a while. It doesn’t appear as if he can do a lot about it since he is supposedly bed ridden. That’s why a great plot twist would have been if she was actually trying to destroy him. That would have completely changed the dynamic of her character and turned her from a pushover to a tactician. It may have meant that she wouldn’t be as heroic, but at least she would have taken a stand against him. George couldn’t die soon enough.

Even in the flashback when George first appears he looks pretty bad. He basically tricks Ellen into being with him for a while as a lot of misunderstandings led her to believe that he was a sick man who needed cheering up. Either way she should have left the room the instant he started flirting since at the time she was with Ranney. Ranney didn’t seem to care much considering his stake in it so I can at least see why she left him. The guy definitely didn’t have much personality and didn’t seem to think about the situation much. Even in the present he doesn’t actually contribute much. It is more reassuring to have someone supporting you, but it’s barely better than nothing when this guy is involved. At least he did get Ellen to tell him what was going on rather than just taking what she was saying at face value.

George’s mother appears to also reinforce the notion that he was always a bad guy. She explains that he never really wants to see her and closes himself off from the world. All of this still makes me wonder how he got together with Ellen in the first place. Was it really just because he was an air force pilot and that’s supposed to be super impressive? You’ll just have to suspend your disbelief for the whole movie on that front. So, part 1 of the film drags on a bit as all of the George scenes will just have you rolling your eyes as you wait for him to die. I suppose this may be different if you didn’t know that he was going to die, but it was in the movie summary so you know that the plot can’t start moving until he does.

Part 2 of the film is significantly better as Ellen tries to challenge the postal service. The mailman is a stickler for the rules who refuses to give back mail after he has taken it, even if it is the same person who gave him the mail. He tries to spin it as company policy but I just think he had some beef against the main characters. I’ve never heard of such an outlandish policy and considering what a small town this is I hardly think he would have gotten in trouble. He has a legal leg to stand on I guess, but it doesn’t make the guy any more likable. Ellen doesn’t really do a good job of confronting his superior though. She does come across as really unreasonable from the guy’s point of view. She should have either tried to falsify the statement at home with the forms he gave her or just thrown in the towel and start to prepare a defense. Instead she keeps trying for the letter until the guy promises to put it through. You always have to be thinking of what tactic to use for discussions like this instead of just looking desperate.

Part of the irony in the film is that Ellen is making George’s job very easy. She runs around everywhere which looks suspicious and won’t even talk to the neighbors. It’s too bad since the neighbor seemed like a nice enough character who probably would have been able to help. The kid wouldn’t have been a very good witness though. He’s not a bad character, but who would believe a kid? He also seemed rather greedy with how many cookies he was trying to eat the whole time. You’d think he would have been satisfied with 1 or 2 when they were offered.

I have to finally question George’s plan one more time. He wanted Ellen to deliver the letter, but lets face it. If she really was going to murder him why would she possibly deliver the letter? She would have read or burned it instead because you wouldn’t take such a chance when the plan is so close to being complete. George’s plan only works if Ellen was innocent which really makes it a poor plan indeed. Fortunately for Ellen things work out all right. While there will probably still be some questions and inquiries they will be a lot easier without the letter. In this case destroying the evidence actually turned out to be a good thing.

Overall, Cause For Alarm isn’t the best thriller because it only works thanks to a lot of conveniences. The main character had to be a wall flower and also one who isn’t very intelligent for this to work at all. If she hadn’t been overreacting the whole time the letter may not have been very effective anyway since she would have been able to convince the world that George was crazy along with Ranney. Ranney was involved so him being a doctor wouldn’t end the discussion but it would still help. I have a feeling that a lot of George’s cohorts would have been able to have given supporting testimony as well. If you still like to see a tense film where it seems like the walls are closing in on the lead then I suppose this is a decent thriller to watch. At the very least the writing is fairly solid except for George’s cringy villainous rants. Otherwise, I’d say stick to other retro films. There have just been many that were better than this one.