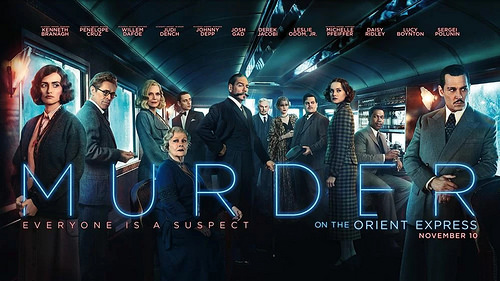 Murder on the Orient Express is definitely a classic book turned into movie format that was a lot of fun in its original version and keeps the same level of quality in the remake. It’s a pretty faithful adaption as while it does take liberties it doesn’t do anything that drastically changes the outcome or the way that the story unfolds. If anything the first change helps legitimize Poirot as a great detective who can predict the actions of the villains pretty well. We didn’t actually see much of that in the original version and had to take their words for it. I mean, he did solve the main case so we know that he is good, but seeing him solve a real case at the beginning was a really good move.

The plot of the film is about the world renown detective known as Poirot who is finally on vacation after having solved a bunch of tough cases. He is interrupted though when a case pops up overseas so he quickly snags a ride on the Orient Express. Once aboard however it turns out that a new case is on the horizon and this may be the most difficult one yet. A bunch of suspicious characters are aboard this train and they all have secret agendas. They all insist on lying to Poirot directly as well which doesn’t make his job any easier. He needs to solve this case fast since the train will be up and running again within 2 hours which isn’t really all that helpful to him.

Poirot is definitely a fun main character. He definitely is very smart and I’m glad that he isn’t afraid to admit it as he even states for the record that he is the greatest detective in the entire world. That’s quite the claim and I like how bold he is. Poirot also shows that he has kept in shape despite being quite old at this point as he chases someone across the train tracks outdoors and actually manages some pretty good jumps and agility. It may be a bit of a stretch, but I guess if he uses his tactics to know where to jump and how to corner the opponent it is a little more believable. I’m guessing he found out about the money stealing himself in the original or it was just admitted instead of actually chasing the man down, but either way works pretty well.

One thing I always have to give credit to the film with is that they don’t go into the actual murder case much. It’s a pretty dark case for sure so we just need to know of its existence, not any actual details. That would certainly be a jumping the shark moment for the film so I have no qualms with this part. It also gives everyone a pretty good motive here so that makes them all good suspects. Even if the ending might be well known I won’t spoil it here in case you don’t know about it.

Now, I guess the question is how you feel about the ending? I definitely agree with Poirot’s initial response which is that there is good and evil and ultimately the guilty party made a choice. There is nothing left to do but to take this to the cops. Taking revenge is a pleasure in itself so of course it makes sense that this would come with some kind of repercussions. They may have felt justified about this in the end but it doesn’t change anything about how the action was wrong. 2 wrongs don’t make a right after all and that’s one of those facts that cannot be changed. So, my view on the ending is that the guilty party should be arrested and that’s the end of that. On that note the ending isn’t all that satisfactory, but it wouldn’t hurt the score all that much. Now, if the villains had actually destroyed a few more people or something then that would have been an issue. I also think Poirot should be holding a little more of a grudge considering that the doctor was very close to murdering him in the end. It’s fortunate that Poirot’s friend was here.

Poirot’s friend certainly was the best character in the film. He came through when it counted and really felt dependable. He got Poirot a seat on the train last minute like he said that he would and was just a great backup the whole time. It would have been extremely difficult if Poirot had been on his own so even having just one person around to help him out was absolutely crucial.

The location looks pretty good as the scenery of the mountains is quite realistic and I do like the scenery. After seeing a bunch of films take place in hot environments the cold is a great contrast. I’ve always been a bigger fan of the cold as well so naturally that appeals to me more in films as well. The actual train looks quite refined as well and while I am not a fan of taking a train overnight like this I wouldn’t mind on this one as long as the Wifi is good. The food should really be complimentary if you ask me instead of purchasing everything once aboard. Of course, I’m sure that this is how the railroad makes the bulk of their money.

Usually I would talk a bit about the suspects, but they don’t really stand out all that much. There are so many of them that each suspect only gets one scene to themselves for the most part. Of course with a train this big it makes sense that there would be a bunch of suspects. If anything I have to question how there aren’t more suspects running around. They did say that the train was filled to capacity after all and I feel like a lot more people would have fit on the train based on how large it was. Perhaps that is just how it was back in those days though as adding more people would potentially sour the experience.

Overall, Murder on the Orient Express is a solid remake. Fans of the mystery genre will certainly enjoy it even if everyone probably already knows the ending at this point. It’s fun seeing everyone try to give Poirot the run around. There is even a teaser for the sequel at the end of the movie which should be interesting since I am not familiar with any of the other Poirot books. It’ll be tough for the Nile to top this film, but maybe it can pull it off. The thing is, this film didn’t really make any actual mistakes which makes it tough for a sequel to possibly top it since not making a mistake is incredibly difficult. Of course I would still recommend you watch the original version first, but both are very close overall.