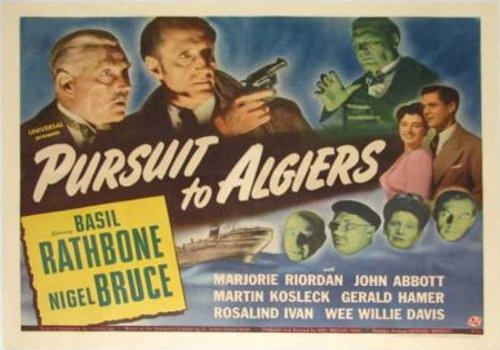 Back to back Sherlock Holmes reviews? Yes, it’s time to jump right back into the land of mystery. This one throws the cast on a ship which means that there isn’t a lot of room to run for both the heroes and the villains. They will have to execute their missions with a lot of strategic planning in order to come out on top. It’s a pretty fun film and probably has the most direct confrontations between Holmes and the villains that we have seen in quite a while.

The film starts with a mysterious group luring Holmes and Watson to an abandoned house. They want Holmes to guard Prince Nikolas by getting on a plane with him and acting on an escort. Holmes accepts but there is no room for Watson so the sidekick heads on a boat to meet up with Holmes again later on. Holmes pops up anyway though and tells Watson it was all a trick. The problem is that 3 Russian spies come aboard and want to destroy Nikolas. There is also a mysterious lady named Sheila who always panics at the sight of Holmes. What secret is she hiding and why should she be terrified of Holmes? Time to find out!

At first the film plays out like your typical mystery as we are introduced to a bunch of suspicious characters and naturally they are all very sketchy throughout, but then we see the actual villains come aboard the ship. This means that either one of the suspects is an accomplice or they were all red herrings. Either way it makes for a fairly tense atmosphere. Also, the boat has a lot of people on it so in theory that makes it hard for the villains to try anything, but it can also be hard for Holmes to protect Nikolas without making it too obvious either. A lot of mind games are had here.

One such moment that worked really well was when the villains challenges Holmes and Watson to a game of curls. Throughout the match they use game lingo to attack the other person’s strategy about how to deal with the Prince. Holmes ends up doing pretty well in both arenas while acting innocent as he always does. Holmes likes to put up a humble facade even while he is smirking on the inside. He is fairly aggressive here as he breaks someone’s wrist and certainly doesn’t back down from the opposition. He even steps in to save the prince from an untimely swim when Watson proved unequal to the task.

This was definitely one of Sherlock’s better appearances. I’m also glad he was pretty careful about not actually getting on the plane that was pretty obviously a trap. He was maybe a little too trusting in even getting into such a situation, but I have to assume that he recognized the people he was dealing with right from the start. I’m also confident that he wouldn’t have fallen for a certain voice trick that was near the end of the film.

Unfortunately this was not one of Watson’s better appearances. He has a little too much fun with Sheila and forgets the situation too quickly. He’s a man on a mission right now so you think he would show a little more urgency. He also doesn’t guard Nikolas too well and tendsto let the guy out of his sight a lot. An old lady is also able to deter him from arriving as soon as he would have liked by putting him in the opposite direction. He was just really careless here and of course that tends to happen when you are the comic relief character of the series, but most of the other films put him in a bit of a better light than this one.

Of course, Nikolas still deserves most of the blame. He knows that everyone is after him but still makes alot of rookie mistakes. When Sheila asks him to go onto the deck with her to hang out he should have realized that this could be dangerous. Despite that, he seems rather oblivious the whole time and doesn’t even look for traps. He goes awful close to the water and just doesn’t show any common sense the whole time. His final scene is just as bad as all of the others and I was almost expecting his end to be a rather tragic one as a result. The guy just clearly doesn’t put too much stock in his own life.

Sheila’s subplot is probably the only one that just isn’t very good here. It’s just unnecessary and taking her out of the film would have put more focus on the actual case. She makes for a good red herring most of the time, but even then her motivations don’t seem all that consistent. From the three villains, Gregor was probably the best one. He is essentially the Moriarty of the group who likes to attack the heroes with carefully thought out plans when they least expect it. He isn’t as quick to act as the other two. Of course, waiting so long has its weaknesses as well, but I can’t say that there was any real fault with Gregor’s plan. It was actually really sound.

Mirko is the most aggressive one in the group and his knife throwing skills were on point. This guy is definitely a fighter. Naturally that’s not enough to take on someone like Holmes though. The detective is always ready for him. Then we have Gubec who gets the smallest role of the 3. That’s likely because he can’t talk so without any lines it was hard for him to be quite as memorable as the other 2. He still does his best though and isn’t bad I guess, but there’s just nothing all that likable about him.

Overall, This was a pretty solid Holmes film. The boat actually made for a great backdrop to the story. It was nice seeing the heroes and villains all stuck on such a small object like the boat. The film maybe spends too much time on red herrings, but at least the suspects are believable enough where you might suspect them for a while. Of course, the more Watson is sure that one of them is the culprit, the more confidence you will get in that just not being the case. It’s almost a little sad when you think about it.