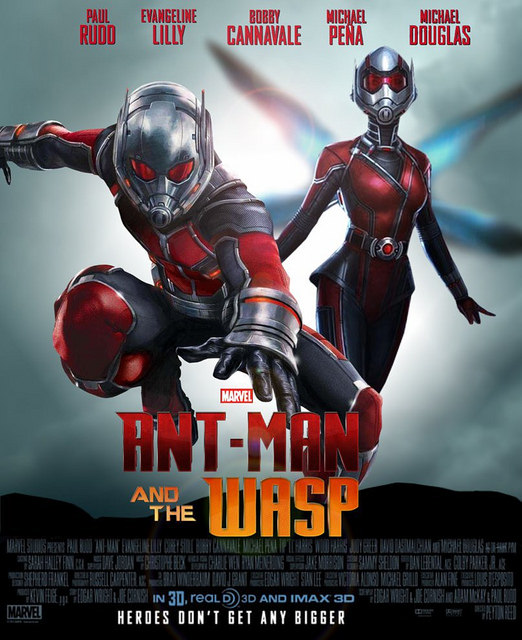 The first Ant Man film still ranks as the worst MCU film of them all. It’s a shame since the film was a lot of fun but just squeezed in too much animal violence which certainly wasn’t necessary. This one is a big improvement mainly since the insects don’t get to do a lot here. There are a few casualties used for an unsuccessful gag but for the most part this film avoided making the same mistake as the last one which is good.

The film starts off by showing us how Janet made the ultimate sacrifice to save the world. We then cut to Scott trying to do his best to make it off house arrest. He just needs to stay in the house for 4 more days which should be fairly simple. Unfortunately he then has a dream about becoming Janet which leads Hope to kidnap him for answers. An Ant is left in his place but Scott has to solve this case by the end of the day or else the cops will grow wise to him. The mission: Save Janet from the Quantum Realm. The obstacles: A mysterious being known as the ghost and a couple of thugs with guns. Looks like it is time to suit up!

This film always did look promising from the first trailer. Mainly I liked the music and Wasp’s confidence that she would have changed the outcome in Civil War. I don’t doubt it either as the only opponent that she would effectively be powerless against would be Vision. Everyone else would be taking damage from her blasters and size shifting combos. Honestly Scott should have brought her along and I would like to see her fight more powered fighters. She is definitely one of the best characters in the film and one thing she is really good at is adapting on the fly. Even with her first encounter with the Ghost she was handling the phasing abilities pretty well. Attacking the instant that the ghost would appear and using her own size shifting to counter it.

Then we have Ant Man who is ultimately a normal guy without too much fighting practice aside from some moves that the Wasp taught him. Considering that he does a pretty decent job but he does spend a large chunk of the film getting thrown left and right. It makes sense since the Ghost is far better trained. While he may not be the toughest fighter out there, Scott’s definitely a good guy and is definitely trying his best to help everyone out.

In particular I thought that one of his earliest scenes was pretty impressive. Since he is locked in his own house he had to improvise to entertain his daughter. He builds an elaborate set up of boxes and figures to make her a mini adventure. I imagine that the film makers had fun creating that as well. He even learned slight of hand magic tricks which I would like to see him incorporate in fights. That kind of truck could be useful.

Pym is a little more on the annoying side though. Wasp has really valid reasons to be upset at Scott since they were rather close and he still ditched her without a word to get in on the fight. That is definitely very personal. Pym basically has the same complaints but you can’t put quite as much stock in them especially since he would have been very reluctant to help. They were fighting Ironman though so maybe that would have convinced him but as Scott I certainly wouldn’t have trusted the guy. Pym has his moments but at the end of the day he still isn’t the most heroic figure out there.

One area where the film shines is the fight scenes as I mentioned earlier. They are quite well done and the battles are very quick. I’ll take phasing over size manipulation any day but both techniques are great for dodging hits. We also get a lot of chase scenes with the cars and the heroes are always on the run. The film’s pacing is quite good as it never drags on and we get several climaxes each more intense than the last.

Meanwhile Goliath gets a bit of a role but he definitely isn’t a very good character. He has some reasonable motivations to work with but goes about them all wrong. Things would have worked out a whole lot better if he just thought things through more. Instead he just comes across as rather whiny the whole time. Burch also gets a bit of a role as he tries to force himself into the technology breakthroughs that the heroes are poised to get with their tech. You have to love his confidence I suppose, but the guy almost feels a little out of place here. He never actually does anything so if he was cut out I doubt anyone would have really cared.

Luis gets a decently big role as well and he handles the comic relief role pretty well. He never seems to be all that afraid of the villains and takes everything in stride. He is pretty good at designing traps as well and kept his company alive for quite a while. This guy is definitely not someone to be taken lightly. He’s better than most of the other sidekicks currently running around the universe that’s for sure.

The Ghost is one of the big characters of course since she is the main villain and it’s a role that she handles well. I like the design of the Ghost suit and she certainly mastered her powers to a good degree. As always SHEILD looks awfully shady here but that’s nothing new. Fortunately those guys are no longer in business in the movies (for now) so these people with powers can finally be safe. Towards the end her partner in crime kept chickening out so I was definitely on her side there. They’ve already come this far and he knows the risks so this change of heart comes across as very sudden especially since the Ghost is the one taking all of the risk. She’s one of the better recent villains.

We do get an after credits scene here that is actually plot important and taken seriously. There is a second which covers the comedy angle and that’s always good since if you just have one such scene and it’s a comedy one…then that’s much more of an issue. The first scene is almost tragic in a sense since aside from serious plot convenience it is hard to really see a way out of this one aside from a lot of waiting. I probably would have tweaked the ending a bit there but either way it is a solid scene.

Overall, This was a pretty fun film. It was a good follow up to the Infinity War and continues to show how modern effects can make a lot of different super powers pretty useful. Being able to change sizes may not seem amazing right off the bat but if you can do it with great speed then you will be going places. I’d recommend checking this film out if you’re in the mood for a solid action film with a good amount of humor. Now I’m ready to see how Ant Man will contribute to the team in the next Avengers film.

6 thoughts on “Ant-Man and the Wasp Review”