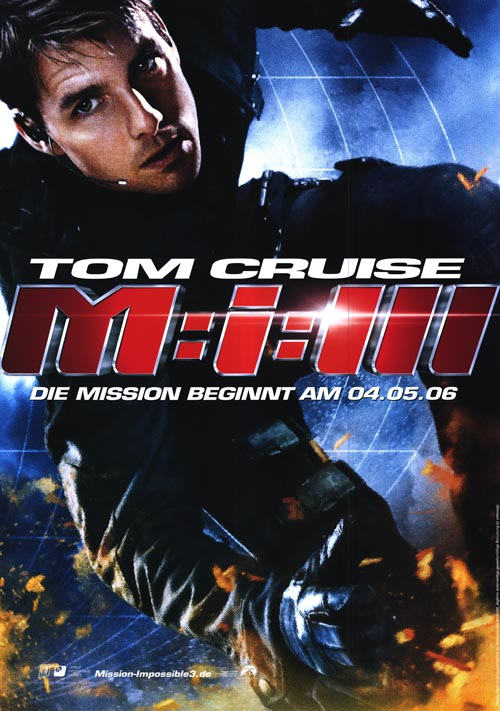 It’s time to look at the end of the first trilogy. It was definitely not as consistent a trilogy as the current one is so far, but it was still a fun ride. This movie is basically right in the middle of the other two as it manages to start its comeback tour towards being the best, but still isn’t quite up there yet.

Ethan has finally left the IMF at least when it comes to active duty. He recruits cadets, but for the most part he’s on his own. Unfortunately John brings him back for a mission when one of their agents is captured. Ethan tries to save her, but the lady dies. This all seems to be related to some kind of big conspiracy so Ethan tries to bring in Owen, the mastermind behind this. The thing is, Ethan isn’t alone anymore, now he has a family which the villains can use to get the upper hand on him.

This one does have the weakest intro out of all the MI films though. The first film had an excellent mission that quickly got serious when the heroes all started getting bumped off. Mission Impossible 2’s had a cool mountain climbing segment although depending on how far you go for the first scene then it loses after all. I’m never big on interrogation scenes so of course this one wasn’t really an exception. It’s always an interesting choice to have the film start off near the end as well since it really gives away quite a lot of what is going to happen next. It starts the film off on a much grittier tone than the other two which clashes with the happy opening theme that plays afterwards.

It’s time for Family Trope 101, the wife gets kidnapped. It’s always a shame that it has to be this way, but when a hero or a big secret agent with enemies gets a family, things don’t tend to go well. The wife/kids are always taken and then the villains have some power over the hero. Up til this point Ethan has been untouchable because he doesn’t really have anyone he cared about. Yes, there’s Nyah from film 2 who was dumped off screen, but that’s slightly different as they specifically sent her to the villains.

Lets also not forget that so far the IMF always tends to have leaks everywhere. Once Ethan gets a family the villains are all going to know about it. Since he didn’t even tell her about any of this, she can’t even prepare herself for how this is going to play out. Ethan is also surrounded by agents who don’t seem to give it enough thought either as Luther yells out Ethan’s name in front of the villain. Sure, Owen would have gotten the name anyway, but why make it easier for him?

Of course, Julia is a good character though. She seems like a very nice person who is very supportive of Ethan. She chooses to trust him instead of creating drama about his secrets which is definitely really nice to see. She also looks good in the climax where she grabs a gun. As Ethan says, it’s just about pointing and shooting. So long as you’ve played a good amount of Call of Duty you should be fine. It’s just still an annoying trope when we have Julia captured.

Interestingly the film uses this as an excuse to basically skip the “Mission Impossible” stuff this time around. Ethan’s break-in of the hero base this time is completely off screen as we have the side characters chat a bit instead. I don’t really understand the thought process behind this since I imagine that most viewers came in for the fun planning right? Well, if not then I guess that may not be something too many people cared about, but it certainly stuck out to me.

It’s good to see that Ethan has advanced so far that he is now an instructor rather than in the field. He’s definitely a solid character here and still hasn’t lost his skills. He does a good job of fighting off everyone here and always keeping the upper hand when hostages aren’t involved. The climax fight can be a little annoying since he takes quite a beating due to the bomb in his head but at least he adapted by the very end of it. I can definitely see why he is ready to go on a honey moon instead of another mission.

Owen is the next villain of the series and he wants to be rich! The guy thrives on plot convenience and the moles having every possible edge on the heroes. Ethan should have shot him down before running out of ammo if you ask me. Owen definitely likes making sure to destroy as many followers as possible. He’s pretty generic as far as villains go, but I suppose I’ll give him some credit for actually being able to fight.

John is one of the big characters from the IMF and he’s a fun boss. While he is a very layered character where you can’t take his words at face value, he can be handy at times. No matter what his end goal was, it would have been curtains for Ethan without his help. He always tries to talk back to his overconfident boss even if it doesn’t always end very well. Points for effort right?

Luther is still around and he is still the expert on all things I.T. He has a squad at the ready as well with several other characters. None of them seem to be very important though so I wouldn’t count on them returning. They’re all okay, but the movie never bothers to give them any character. They all end up missing the climax as well which speaks volumes. At least Luther spends the whole movie trying to give Ethan a bunch of advice even if the lead doesn’t really pay it any mind.

The soundtrack is still pretty solid even if the remix isn’t quite as inspired as the second film’s. It’s all still pretty action packed and the main theme is already good so the remix would have to be downright bad to make it sound poor. There’s not much to say about the effects in particular here as it all looks pretty sharp. The films pick really good backdrops to have the scenes in.

Overall, Mission Impossible III is definitely an improvement over the last one. It does forget the actual espionage part of the film quite a bit, but it’s still an interesting film from start to finish. The film could get a little dark like with the opening scene’s interrogation which pops up again near the end, but it doesn’t get as dark as you may fear. The film also has a happy ending for Ethan which they always do, but this one certainly feels very final. It would have been a reasonable way for the series to conclude although of course I’m happy that it ended up continuing since the next 2 films would be really good. I’d recommend checking this film out if you’re in the mood for a good action story. This film’s the complete package.