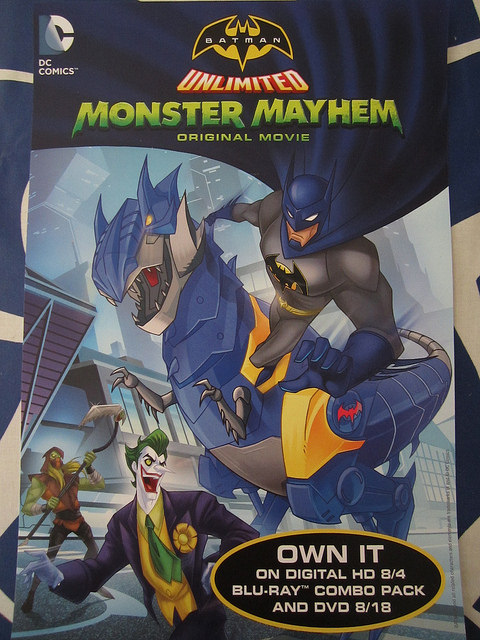 It’s time to look at the next Batman Unlimited film! The first one was pretty solid so I would expect nothing less from the sequel. It’s nice to have a Batman film that feels more like the classic days. It’s a bit of a cross between something like Brave and the Bold and The Batman in terms of atmosphere and character designs. It all works pretty well and the film delivers on what it promises, a lot of action with a good story behind it.

The film kicks things off with a new character who has joined the fray. Gogo is a genius who likes building VR games. Unfortunately he is confronted by his co-worker who tries to destroy him. Gogo quickly figures out that she is actually a robot who is pretending to be his friend, but this knowledge is not enough to turn the tables. Even Batman is unable to save him from this menace. It turns out that the robot is working for Joker along with other villains like the Scarecrow, Solomon Grundy, and Silver Banshee. For once Batman realizes that he can’t defeat all of these foes on his own so he decides to call in Green Arrow, Red Robin, and Nightwing. Together these heroes will have to save the world!

In a subplot, Cyborg is still adjusting to his new boosters. Unfortunately he doesn’t have much time to do so because a virus has infected the city and as Cyborg doesn’t have too many security firewalls he is quickly taken over. I’ve already talked at length about how Cyborg is a Teen Titan and not a Justice League member so I won’t go into that here, but this movie doesn’t help his case. I figured that the whole point of being half human and half machine was that the human side could help him fight against viruses and such. That never seems to be the case so he might as well be all robot then right? Technically Cyborg is very strong, but none of that matters if villains can just hack into him every day.

This film is naturally pretty light hearted as you may expect although it does get some serious scenes. The intro where the robot tries to murder Gogo is actually played pretty seriously. Likewise, the film isn’t afraid to have some real fights thrown in and the animation is pretty solid. It doesn’t really have any choreography and the fights do tend to get paused for quick one liners and such, but the film looks good when it actually tries. It’s a nice animation style and works well enough for the film. Unfortunately the soundtrack is basically nonexistent so don’t expect to remember any of the tunes by the end. This just isn’t quite that kind of film. The humor isn’t bad for the most part. It can feel a little forced, but it could be a lot worse. I’d give the writing a pass.

Then we have a nice Matrix homage near the end as Batman and Joker fight in the Cyber World where they each have to corrupt the other. It’s a battle of wills so naturally you’re never too worried for Batman. He’s not going to lose when it boils down to a fight of resolve. The pacing is pretty good for the film as well which makes sense since it’s so short. At most you may find it a bit redundant how the heroes keep beating the villains, only to have them escape for another round. I feel like this happened at least 3 times. The villains just wouldn’t quit which is admirable but then there’s no reason to think that the rematch would go any differently. Joker’s robot at the end was pretty cool though. If not for a serious amount of plot hax he definitely would have won in the end. All he had to do was actually try moving so Cyborg couldn’t hit him and then it would have been all over. Maybe deep down Joker actually wanted to lose. That would be quite the twist eh?

The movie also decided to go with a pretty interesting set of characters here. Batman is an obvious pick of course and likewise for putting in Tim Drake as Red Robin. While the latter is treated as comic relief a little too much, he still gets the job done. For Batman, while I mentioned that the animation is solid I have to admit that Bruce Wayne looks very off. It’s something about his human design that makes him look like a character out of Space Dandy or that crazy future 90’s aesthetic. Not a bad thing, it’s just different. Nightwing is another good teammate to have around and while there’s not much in particular to say about him, I do like how the film turned his trope of self doubt on its head. When Scarecrow tries playing the mindgames Nightwing doesn’t fall for it. As he said, he got over that a long time ago.

Then we have Green Arrow who does his best but as always he seems to be a step behind the others. After all, he’s just as rich as Batman, but doesn’t have the hand to hand skills or large array of gadgets that the Dark Knight possesses. As for Cyborg, he was getting mind controlled the whole time so while he is a nice guy there isn’t much to say about him either. As for the villains, Silver Banshee was fun. Her ability is always pretty lethal against most opponents since they will actually get older which can’t really be undone. Solomon Grundy is still the power hitter, but he’s never the most enjoyable villain since he isn’t too smart. The film did a reasonable job of not making him too annoying though and dressing up as the pizza man was smart. Scarecrow was pretty good here. He was a legitimate threat and kept the heroes on their toes throughout. This was also one of Joker’s better outings easy. He balanced out the humor and serious traits of his character well and as always his plan took Batman to the edge.

Overall, Batman Unlimited continues to be a solid series. I look forward to seeing how the third film fares. If you like action films or just want to see some light hearted fun then I would recommend this film. What you see is what you get so there are no real surprises here, but the plot is executed well. You’ll be kept entertained all the way through and since this is one of your only chances to see Red Robin in action, how could you miss it? With a solid blend of writing and animation, this is definitely a complete film.