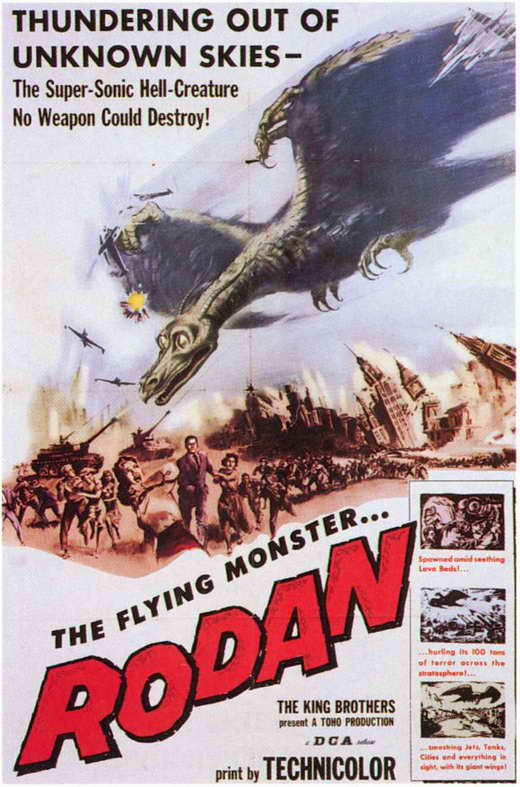 It’s time to look at one of the original giant monster films. Many believe that Godzilla is really what kicked off the Kaiju boom, but you have to consider the mass market appeal that Rodan brought with him. Rodan isn’t your average giant monster, he is one that can fly. In fact, if we took this version of Rodan unnerfed and put him up against the other giant monsters, he would crush them. Not even Godzilla would last long against such a threat. Rodan helped audiences finally take giant monsters seriously and still works very well as both a thriller and a Kaiju film. While the film does drop off quite a bit at the end, it’s not enough to negate the rest of the experience.

The film starts off with a group of miners heading to the caves. Unfortunately they are brutally murdered by a bunch of giant worms. The humans go for backup but none of their guns are all that effective. Fortunately that’s when Rodan shows up to eat all of the worms and claim dominion over the skies. Any jets that stay in the air are promptly destroyed. The humans realize that the only way to stop Rodan is to throw him into the volcano, but this task gets a little more dangerous once there are 2 Rodans on the field. What can they possibly do?

The short answer is nothing. There’s no way that the ending even could happen. What the film should have done was have the humans acknowledge that they can’t hope to stop Rodan. This would have been the signal for a very emotional scene to start as the humans team up to create a giant paper mache version of Rodan that they sail off to an uninhabited island. The Rodans would follow it and leave humanity alone for a little while. Even I may have teared up a little bit at such a spectacle. As it stands, the ending is emotional but in a sad way. I was rooting for Rodan the whole time and was looking forward to seeing him wipe out humanity. For that not to happen is simply tragic.

Enough dwelling on the ending though. I didn’t like it, but it wasn’t quite horrible enough to drag the film down too much. I have to give credit to the special effects here as they were handled a lot better than expected. I dare say that it even beats most of the modern films when it comes to depicting Rodan’s speed. In this version you actually can believe that he flies at super sonic speeds since we see him outmaneuvering a jet. Rodan may not have a fancy laser to shoot out, but with moves like that he doesn’t even need one! I also liked the size difference between Rodan and the worms. Since we already saw how massive the worms looked to the humans, it’s clear that Rodan is a colossal beast.

As for the humans…there’s not much to say about them. They’re around of course, but they don’t really contribute much to the story. The dub has fun with them as everyone gets in a few good one liners. It’s hard to tell if you’re supposed to take the characters seriously or not. On one hand, it’s not as if they’re making obviously bad decisions or anything like that, but on the other hand…they just don’t seem as invested into the situation as you would possibly expect. After all, having a giant monster around destroying everything is kind of a big deal right? I didn’t dislike the humans, but as with most of the old monster films I found them to be a tad forgettable. Granted, it’s probably because I’m focused on the monsters.

I will say that the writing was solid. These films definitely take place back in an era where scripts were actually handled with care and you didn’t have to cringe at every other line. The pacing of the film is good as well and it manages to cover quite a lot in a short amount of time. There’s not much that the film could have done to be much better in these areas as it was just solid. I can only imagine how impressive this movie must have looked back in the 50s. Whether you are currently a big Kaiju fan or just getting into the genre, this is a movie that I can definitely recommend checking out purely on a technical level in addition to being a monster film.

Overall, Rodan is a fun film. He’s always been a solid monster, but one who is probably a little over matched against the others. He’s simply too fast and strong so he tends to get nerfed quite heavily. I’m hoping that the upcoming American film has a good idea of how to use him, but I am going to be entering that film with a few reservations on the power levels department. No worries, it’s still going to be film of the year, but with all of these Kaiju running around I hope that corporate knows what they are doing. Still…when do they not?