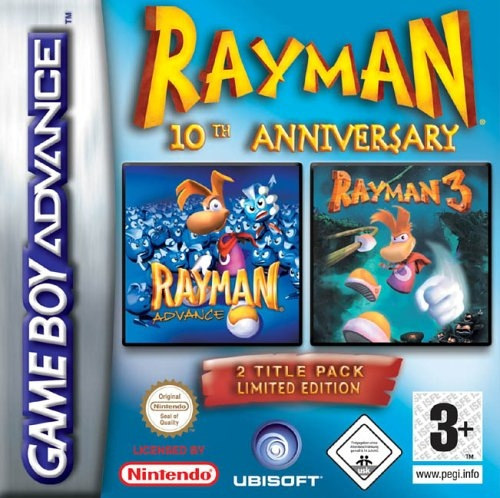 It’s time to take a quick look at the Rayman collection I recently beat for the GBA. This one made the interesting decision of merging the first and third games in the series. I don’t really understand why they would skip the 2nd game. Maybe it just wasn’t formatted in a way that would be easy to port to the GBA the way that the others were. Either way, it’s no big loss since I’m guessing it should be rather similar to the others. This is my first real venture into the Rayman series so that was neat. I’d say that it holds up pretty well though the third game definitely more so than the first. If you are a sidescroller fan then you need to check Rayman out.

The first game is pretty intense with how difficult it is. You get 10 continues and you have to be sure to not lse a life too easily. If you died too much on a level consider restarting your system right away so you can win without that hapening. I just barely made it as I finished the game with no continues left. Of course, if I was going for the secret ending by finding all cages then that would have been another matter entirely. The controls are good, but I can’t say as much for the level designs. There are a lot of blind jumps and cheesy sections where the game just stacks the deck against you. That’s fine, but then we should get unlimited continues like in most games. I never like when the game has a limit and then you just have to start over. That doesn’t seem very fair and will just become tedious after a while.

The plot of the game is a little weak though and that’s one thing that seems true for both titles so far. It’s just that Rayman himself isn’t nearly as interesting as most of the other colorful protagonists in these kind of games. I’m assuming he will get more personality soon but right now the cast doesn’t really jump off the page so to speak. They’re all just going through the motions so to speak. Since you don’t even get to see the ending without getting the 100+ cages then it’s not even much of a satisfying end. This game is fortunately supported by the next one.

Rayman 3 is a noticeable improvement in just about every way. For starters the gameplay is a lot faster and smoother. You really feel like you are in control this time around. None of the enemies scare you and if they ever start to get a little rowdy you can quickly take them out. Your lives are quite abundant and there is no limit on retries so no worries there. There is also more of an actual story this time as we get text boxes and the villains have more of a goal. The story still isn’t at the point where it could actually be considered as a selling point, but it’s getting closer which is the important thing. Just a few more steps and it will be ready for the big leagues. Regardless, this is a title that I could recommend a lot sooner than the other one. It’s just a solid side scroller and one that holds up well as it isn’t clunky.

The graphics for both games look pretty good. Naturally the 3rd game is a little brighter and more detailed, but it’s not a huge difference. Both games are quite clear and you can tell that effort was put behind them. Likewise the soundtracks for both games are pretty similar. There are some memorable tunes in there, but nothing super intense. Either way you’ll probably be too absorbed into the levels to notice much. The levels require a lot of concentration or you will be doomed to lose quite a lot.

As far as replay value goes I’d say there is quite a bit here. In the third game I was able to get most of the collectibles naturally so the bulk of your play time will be in the first game. The third one is also shorter in general, but every bit helps. It should last you a few hours. Then the first game will definitely last a few hours and obtaining everything will extend the time even more. Just keep a look out for those lives and continues since they are very previous. Once lost they will not be returned. That’s why the stakes are so high in the first Rayman.

Overall, The Rayman 10th Anniversary game is pretty solid. Since it brings 2 games for the price of one it is already a pretty good bargain. If you haven’t played the series before then it’s the perfect way to start I’d say. It may be tough goings for a little while but you’ll certainly get a lot of experience in how to handle a platformer by the end of this. It’s why I would be a little hesitant to recommend this to a kid but given enough time I’m sure anyone would be able to clear these levels. It’s just all about repetition and trying to learn some strategies. Now I can finally go and play some of the newer Rayman games. I’ll definitely snag them at some point and we’ll see if they can possibly match these two or if they are doomed from the start. No guarantees on just how soon “at some point” means though.