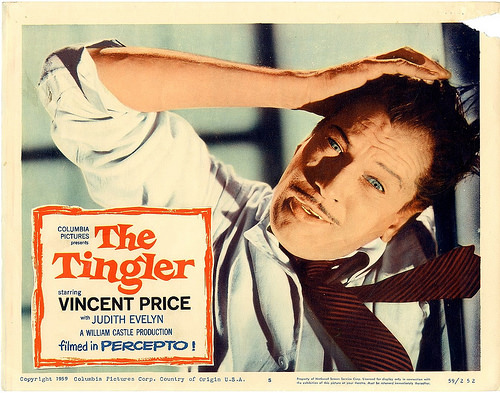 It’s time to look at an old film known as the Tingler. It’s a movie that will cause you to re-think everything you thought you knew about the notion of fear. At least, that’s what the film thinks. We even get an intro at the beginning where the writer is basically begging you to try and act scared during the film since the whole climax revolves around this. It’s a little rough since these films are hardly scary and you’d have to have a group of friends around to be bold enough to yell in the first place. All in all, it wasn’t the best film out there, but as far as horror titles go it could have been a whole lot worse.

So the movie starts off with Chapin figuring out that inside of every human is a giant worm known as the Tingler. It explains the back pains we get when we’re older. When people get super scared the worm gets huge and starts crushing us from the inside however as soon as you yell the noise vaporizes the creature. As such it is hard to capture the thing alive since this is the weakest monster in a very long time. Chapin tries to scare himself but he simply isn’t brave enough and ends up yelling. The effect also doesn’t work too well on his wife since she ends up passing out. No, he needs someone who can’t yell out. That’s where Martha comes in. She is mute and cannot let her fear out. She conveniently dies of fear and so Chapin gets a hold of the Tingler. Will this really make him rich and famous or has he done all of this for nothing?

Chapin is one of those eccentric main characters who wants to prevail in his scientific endeavors no matter the cost. Whatever it takes is what he will do, even if it means putting someone at gunpoint. He is rocky enough where the film is able to successfully pull off some misdirects with him. There are two times in the film where you think he is going to do one thing and he does the other. Both were unexpected and particularly the latter twist as it happens at the very end of the film. Even if these twists gave Chapin a little humanity I can’t say that he was a great character. Let’s step away from the moral ambiguities of even trying to capture a Tingler. Once he actually does have one he doesn’t even want to do anything with it. He decides that there are forces of nature beyond man. All I can say to that is it’s a little late for second thoughts at this stage in the game. At that point everyone suffered for nothing. Chapin is also rather naive.

In a subplot, his wife has been cheating on him for a while now and is trying to steal money from his employee’s fiancée. Chapin confronts her about this and then gets the gun ready. Later on she claims to have had a total change of heart and serves him a drink. He flips the cups thinking that he has outsmarted her but the plan was a little more intricate than that. What he should have done was not drink at all. How could he take such a big risk? The wife is naturally not a good character either. She’s basically just around to try and make everyone’s lives a lot tougher than they needed to be. The film never tries to make her sympathetic and that’s certainly for the best.

Then we have Oliver who seems a little unbalanced. He likes to drink a lot and just seems very off during the scene where he visits his brother’s body in the beginning. He wonders what it would feel like to be in the chair and stuff like that. Even Chapin has to cut him off a few times. Oliver never ends up becoming a decent character and if anything the lead was probably a little too polite to him by the end. At least Chapin is fearless I’ll give him that. Martha could be annoying at times since she would act very suspicious right from the start. She is clearly very connected to her money and didn’t want to let it out of her sight even for an instant. That being said, she is a little too rattled by basic things like a little cut. I suppose it can be unnerving, but all of this together just made her a little too eccentric.

As for the actual Tingler, it’s hard to the creature seriously. Essentially it’s just a big worm with pincirs. Once it has you in its grip then it’s all over. I can appreciate the threat that this would pose to most humans in this film, but he could have had a cooler design. At the end of the day it just didn’t seem that strong. The main characters seem to think that it cannot be destroyed, but they hardly even tried doing anything to prove that theory. As a result it is hard to really buy into that hypothesis. Where’s the proof?

The ending was certainly interesting with how we got a twist like in a modern horror film. Considering who was getting twisted you’ll be hard pressed to try and defend the guy. As they say, karma arrives awfully quick in most horror titles. Play the villain at your own risk there. I guess the film did a reasonable job of making most of the twists realistic throughout but it’s all still tragic for the victim. According to the villain the victim had tried similar deadly things on him off screen, but it’s hard to know if he was being legit or even if it matters.

Overall, The Tingler is a film that likes its plot twists. They actually did work rather well so I’ll give the film some props there. Still, the movie felt rather unfocused. I still can’t believe that Chapin would give up on his dream so quickly after being completely obsessed over the Tingler for many years. That is just too rushed. Most of the characters seem to be rather crazy as well so there’s no one to root for. Even Chapin’s employee is basically just going along with all of this for his paycheck even though he has a feeling that things just aren’t right at the moment. He may as well be an accomplice. He was also going to bring some animals to test the fear element on which is inhumane at best. No, the only character to root for here is the Tingler as it works to destroy all of humanity.

2 thoughts on “The Tingler Review”