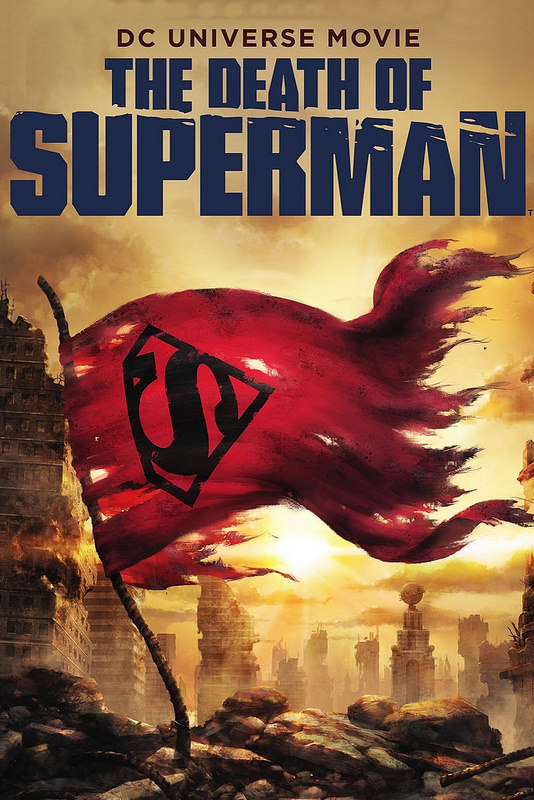 It’s time to look at this recent DC movie. Doomsday already got an adaption a long time ago, but now the New 52 lineup can give it a whirl as well. The animation and fights here aren’t quite as solid as the ones in the original, but I do think Superman got to use his speed a little more which is always cool. It’s a solid re imagining overall and will definitely have a lot of replay value for future watches. However, adding in the League also adds in a bunch of scenarios for the writers to have to deal with which the film doesn’t always put to full use.

The film starts off with a meteor heading to Earth. It busts through a space ship and falls onto Earth. Doomsday walks out and begins his murdering spree. He wants to destroy everything on Earth and slowly makes his way to the cities. The Justice League begin to track him, but this could take a while. Meanwhile Superman is debating on if he should finally tell Lois the truth or not. He better hurry because based on the title he may not have a whole lot of time left to live. Could this be it for the Man of Steel?

Surprisingly the first 40 minutes are used to focus on the Clark and Lois dynamic rather than getting us to the big fight. I think the Lois and Superman stuff have already been done to death, but I wouldn’t fault the film for it too much since I’m sure every writer wants a crack at this. Unfortunately I thought the film made Lois look really bad here. Granted, Clark isn’t in the right at every turn either, but my main issue is that Lois is just rather rude the entire film. She just doesn’t seem like a nice person and given how Superman is all about being nice it just seems a little off.

Case in point, Lois has a co-worker named Grant who is always trying to dig up the dirt on Clark for her. She seems like a really nice friend even if she’s a bit nosy and is just looking out for Lois. She even buys Lois a coffee. I think you’re not supposed to like Grant, but honestly she was just a quality character. Look, the gossip mill at work will always be going. At least she lets Lois know what the others know and gives Lois the option to control the information a little. Lois just brushes her off along with the others in the hopes that nobody will find out but that door has already been slammed shut. She just isn’t very open to talking about it. I also think this is an unfortunate aspect of centering Lois’ character around the romance. It consumes all of her scenes when she is typically supposed to be busy being an ace reporter. It’s probably one of her weakest appearances in the continuity.

Meanwhile Superman is nervous about telling her the truth which makes sense I guess, but if he’s getting serious about her then he should absolutely drop the bomb before the wedding. Doing it afterwards would just be super irresponsible. He was also a little too much at the dinner where he kept trying to silence his parents. The guy’s gotta be able to take a few embarrassing stories better than that. In fact, that would have been a good time to tell Lois that he was Superman. Would have been perfect to be honest. Well, the whole romance stuff certainly wasn’t the best, but the meat and potatoes of this is the fights anyway.

Once the fights start they are definitely a lot of fun. It’s always cool to see Doomsday going up against the Justice League because that isn’t a matchup you get to see often. The fights with them and then Superman are basically nonstop action so the whole second half is just a lot of combat. It all looks really solid and the film doesn’t disappoint. While I did mention earlier that it’s not up to par with the previous adaption I think calling the animation anything less than great would be selling it short. It’s still excellent and the action is enough to recommend the film.

Of course, I do think the Justice League seemed heavily nerfed throughout to make the plot work. That’s why sometimes films just cut everyone else out to avoid this issue. It becomes a case of if you’d rather have the audience suspend disbelief for no other heroes coming to help or having the heroes come and then be completely ineffective. This film chose the latter while the previous chose the former. Some characters like Hawkman are pretty accurate or if anything look too strong. That’s fine, but when we get to the big shots it gets a little tricky.

Case in point, The Flash. We see early on that Hawkman was able to land 2 hits that really sent Doomsday flying. Then Flash comes in and his attacks aren’t leaving a dent. When Flash goes at super speeds his hits actually increase in power tremendously. I think that’s one aspect of the Flash that is constantly overlooked, but at super speed he does have incredible amounts of super strength. That along with the Mace should have done considerable damage to Doomsday. Showing Doomsday taking a pounding and then adapting would have been good to see. Doomsday’s durability along with his regeneration is incredible after all and that would have made the fight so much better.

Then Green Lantern comes in and basically just plays defense. He tries trapping Doomsday and then making a barrier. Both are poor options. Blasting him from the sky and flying around a ton would have been far better options. Then he is knocked out in one hit. Keep in mind that the fight starts off in the early afternoon and doesn’t conclude until late in the evening yet none of the Leaguers wake up. I think the most accurate member was Wonder Woman. She actually gives Doomsday a long back and forth fight where she dealt quite a lot of damage. She showed off her super strength and combat experience. Superman will always be the real power hitter of the League, but I think having the others contribute in a similar way to Wonder Woman would have been good.

Also, the League completely forgot about team work or even fighting at the same time. Every leaguer waits until the other member is down to start fighting. Hawkman comes in first, then loses. Green Lantern then shows up and loses. Then Flash shows up and loses, etc. Martian Manhunter, Cyborg, Aquaman, Wonder Woman, nobody ever teams up at all. They seem to insist on fighting Doomsday 1 on 1 which makes no real sense. It also doesn’t make sense that Hawkman and Green Lantern would both have time to fight Doomsday before Flash arrives on the scene. With his speed even after saving civilians he should have been the first one on the scene. I think the main issue was having Doomsday take down the League while staying believable. Depending on how he beats them you could argue that either Superman has no chance or he suddenly gets power scaled way above the others. I think doing the latter would work just fine. Superman has always been the strongest member of the League and I would argue that typically it is by a fantastically large margin. That doesn’t need to change.

Showing the League hitting Doomsday with a bunch of combo attacks and the beast just refusing to stay down would have been very powerful. The film doesn’t even need to hold back on having him get extremely weakened or losing a limb or two and regenerating. It would show off his healing factor as well as his “adaption” ability. It would work similar to Amazo as their attempts to defeat him would only make him stronger. It’s a unique situation where they could show off all of the League’s talents and skills while still having Doomsday stay on top. I think that would have worked out really well and made the fight more realistic.

Well, that’s enough on the power levels. It isn’t really anything that would hurt the film but always something I need to note. Also, the League took way too long in finding Doomsday. He started murdering people early on and even took out Atlanteans, but it took at least a day to find him. Really? They should have found him within an hour or so after that. Just put the Flash on his trail. By the time they find Doomsday he had already murdered quite a few people. Which the New 52 lineup could be a little off an on with how violent they are. The first installments are quite violent and after that they started to dial it down a bit. This one is a little more on the violent side I’d say. It’s certainly more violent than necessary as we see Doomsday crush quite a few people.

Unfortunately this leads the film into the animal violence territory which was really unnecessary and definitely did hurt the film. A poor bear gets attacked by Doomsday. The scene has no purpose even within the narrative as we can already reasonably assume that he is stronger than a bear. If the film is trying to show that the food chain has been altered, that is rather obvious as well. All a scene like this does is take a star away from the film and lower its replay value. It’s a shame that the film had to mess up here.

There are quite a few after credit scenes here to set up the sequel. Basically each of the Supermen get a scene. I think it would have worked better as one long scene than all of the various cuts though. Just one long scene that sets up the sequel. It’s less jarring than having a quick 3 second scene, cut, 3 second scene, etc. Still, it’s a good attempt though and the sequel should definitely be fun. I look forward to seeing the League deal with these guys. This time they’ll need to be more prepared for the fight though.

Overall, The Death of Superman was a pretty good film, but one that could have definitely been even better. You’ll surely enjoy the big fights with Doomsday and it is nice to have it as part of a longer continuity since you see cameos for the supporting characters like Damian and the Atlanteans. I do think the film may have brought too much baggage with it in the first half though and it should have been trimmed down to get us to the action a little sooner. I definitely still recommend checking this film out though. It’s a good action story with a lot of hype moments. The title basically spoils most of the movie, but I think it’s assumed that you know the plot going into this one.

5 thoughts on “The Death of Superman Review”