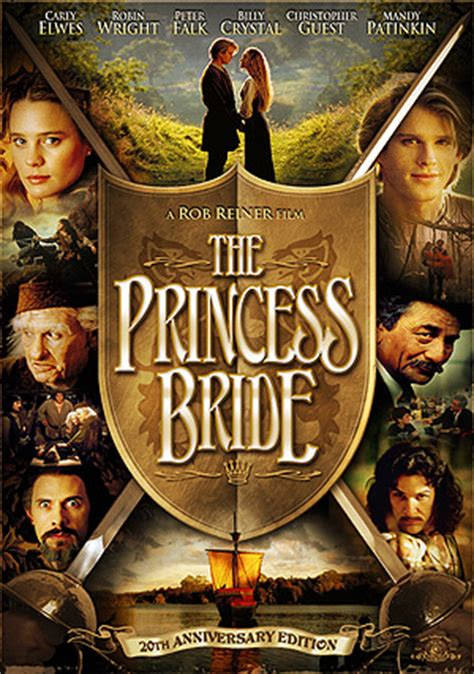 The Princess Bride is definitely a classic film that I’m sure you have probably bumped into at least once or twice in the past. Still, I had never actually seen it until now so better late than never right? It’s definitely an interesting fantasy adventure even if the whole thing is just a story so it’s all fake from the get go. I’m cool with that kind of premise except for the fact that the kid can be annoying, but more on that later.

The film starts off with a grumpy kid getting sick again. He’s upset because his Grandpa is coming over to check on him and this kid is as ungrateful as they get. Well, the Grandpa decides to tell him a little story and the kid slowly finds himself getting sucked into the hype of this adventure. Never in his wildest dreams could he imagine that such a story would be so gripping. It’s about a girl whose fiancee was captured by pirates and murdered so now she’s going to marry a random prince because she has given up on life. Well, her fiancee has returned and they decide to escape from the Prince. They’ll have to get through a dangerous forest and 3 powerful fighters, but nothing can shatter their bond! Can they get a happily ever after?

This is definitely a very classic kind of adventure as the heroes talk like in the olden days. It may have one of the earlier instances of the villain string where you have to fight one opponent, then you go to the next room and fight villain #2, etc. Westley has to defeat each of them at their particular strengths so he has to be very quick, strong, and smart. As this was basically Westley’s introduction in the film I have to say that it was quite impressive. He really showed himself to be a very capable main character. I was not expecting him to be quite so tough. It’s almost sad when he takes off his mask as he loses most of his mystique and hype. He ends up just becoming another one of the guys, but after such a strong start he was already guaranteed to be the best character in the film.

I also think Westley had a point in regard to how easily Buttercup moved on from him. Sure, she didn’t like the Prince but she didn’t care enough to refuse him either since she had given up on life by then. She should have stayed strong and waited for Westley no matter how long it took. Of course he was presumed dead, but then you don’t go for a rebound and just stay alone. As it stands Buttercup just didn’t look all that great throughout this and was even kidnapped. It definitely wasn’t her day.

At first you think that the Prince may actually be heroic as he puts up a good front. If you were not aware of story telling 101 he could even potentially fool you. Still, he was ultimately destined to be evil and is essentially the main antagonist here. He’s certainly not my kind of villain as those with romantic motives never tend to rank. Still, I suppose he’s reasonable. I do think the Prince gets off way too easy by the end though. I mean, depending on how you look at it there are absolutely 0 repercussions for him as the film closes.

Now lets look at the trio of danger. Fezzik is the strong but not very smart member of the group. He’s one of those villains who doesn’t think much so it’s easy for him to join the heroes or villains depending on who his boss is. He’s definitely the least likable of the 3 though. He’s not bad, but just not very interesting. Meanwhile Montoya was a lot of fun. He’s a very quick fighter whose goal is to avenge his father someday. He’s trained all his life to accomplish this goal so it’s almost tragic that Westley is still a better fighter than he is. What makes Montoya a good villain is the fact that he has an honor code and actually seems like a reasonable guy. His motives are also quite sound.

Finally we have the leader, Vizzini. Now this guy is definitely really sharp. The scene where he insults a bunch of philosophers and explains why he is smarter than them is quite good. It’s at that exact moment where you realize that this guy is the real deal. He’s not going to back down to any fighter and has the wits to stay on top no matter what the situation is. His mind battle with Westley is exceptional and I wouldn’t have minded having him appear more. His brief role made the moment all the more powerful though.

Speaking of great scenes, I also greatly enjoyed the fight with Montoya and Westley. There was a lot of back and forth in that fight with both fighters being able to use their full skills. Each one starting with their weaker hand also worked as good twists to keep the fight going. It’s a lot better than I would have expected from such an old adventure film. It holds up extremely well and moments like these are what helps the film be so solid. It really is a very solid adventure film.

Really, the only downside to the film is the annoying kid in the present. He’s constantly interrupting and just being a terrible character all around. His character hasn’t aged well and if I was the Grandpa I would have left by the second interruption. The kid was constantly bashing the book and only got back on board once the romance played more of a focus. He kept pulling the whole “It’s not like I like the romance or anything” bit but certainly wasn’t believable about it. Of course having the film be in story mode is part of the point, but cutting that bit out would have worked well.

Of course, it works as the film’s automatic censor to the more violent moments though. I was not expecting the prince to get tortured the way that he was. That was surprisingly dark and some blood is spilled during Montoya’s final confrontation. Still, the story stays within all family friendly territory I’d say. It never feels particularly excessive and will only scare kids like the one in this film.

Overall, The Princess Bride is a pretty fun film. I do think that the first half ultimately ends up being a little more interesting and fast paced than the climax though. Perhaps that’s because the second half is a little more generic while the first half does a lot of fun stuff like giving us back to back battles and keeping the lead mysterious. The second half is still quite solid but naturally as a result it’s just slightly less impressive than the film’s quick start. If you haven’t seen this film yet then I’d definitely recommend checking it out. The writing is on point and the film’s pacing is solid.